The Toyota Century, possibly the most Japanese of Japanese cars; a finely executed automotive equivalent of conservative luxury.

Since the late 1960s, the Century has been the top choice for Japanese politicians, captains of industry, or anyone with immense power and wealth that has no want or need to flaunt it. The message this model has always portrayed to onlookers is that its successful owner is one who likes to travel in chauffeured luxury, but not so much luxury that it would offend those not as lucky to be in such a position. Plus it’s the right choice: it’s Japanese, it shows the owner holds the country and its industry close to their heart and they haven’t given into the lure of European limos or exotics. The owner may have a garage full of flashy cars, but that’s besides the point – Japan works only on appearances, and people work hard to ensure they are judged by the appearance they portray.

Then we have Nagahama-san of N-Style. He’s owns a bodyshop in Gunma and likes to do skids with his cars. He doesn’t give a shit about appearances. In fact, he’s more geared towards going against the grain and offending along the way than attempting to follow societal norms.

And that’s why we really like Nagahama, and are digging his newest daily driver, a G50 Century that I spotted at the recent StanceNation Odaiba event.

Yes, the Century with the 5.0-liter 1GZ-FE – the only mass-produced V12 Japan has ever made. It’s not a particularly impressive engine when it comes to figures, mustering up under 300hp of might, but what it lacks in numbers it makes up for in exquisite smoothness and unbelievable silence. It’s the perfect engine for a Century.

It’s as if it’s too shy to be a V12, and is apologizing for being so massive in capacity, while every other Toyota has to make do with something smaller and more efficient. Nagahama has slapped a pair of cone filters on it and painted the complex array of covers covering most of the engine bay in an interesting shade of light sand brown.

Then he added an old ‘5 Speed’ emblem under the V12 badge.

Can you see where I’m going with this?

Yes, our friend has gone and dumped the factory auto and swapped in an R154 5-speed out of a JZX using an adaptor plate he found in New Zealand.

He took extra special care in making the conversion look as factory as possible, and the way the shifter sits looks spot on. It’s possibly only the red stitching that perhaps doesn’t quite match in with the garish ’90s faux wood trim.

The massive limo sits slammed on a set of Work Meister M1Rs, 19×9.5-inch +7 at the front and 19×10.5-inch +5 at the rear. The car has retained its original air suspension but a controller has been added to bypass the stock system and allow the height to be adjusted. There’s also a YouZealand Super Stroke Up kit designed especially for cars running air suspension to allow ride height lowering for normal driving without affecting ride quality.

The glorious exterior is something that had to be preserved; just look at how the rears sink upwards into the vast arches, which of course have been rolled and cleaned up to avoid rubbing.

And what better way to maintain that level of privacy than with electrically operated lace curtains.

It’s so Japanese it hurts. I asked Nagahama if the car will drift, to which he laughed and replied, “it’s just a family car, but maybe, we’ll have to see!” 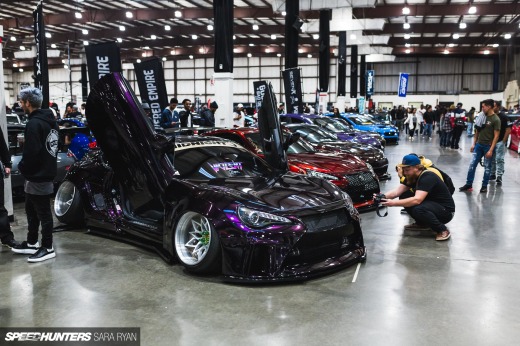 Faux wood in a Toyota Century? I don't think so.

A Century V12 with a manual transmission?
I need me a chauffeur to drive that

People keep telling me my idea of a manual swapped LS400 was a stupid idea. they obviously have never seen this....

A manual GS would be even better...
Any generation would work.

As said below, that's real wood.

I'm gonna go ahead and just guess that any wood you see inside a Century is probably real?

To play devil's advocate.... Does it have to drift? "Will it drift" suggests the build is incomplete without this condition and.... to have to qualify for this prerequisite misses the point... And let me say a feeling of drifting being the deciding factor of the success of a build is commonplace and rather disappointing. Build, be in awe, and break all the FT86 / BRZ's you want .... but for a near 2 tonne Japanese Limo? That's like a big girl doing gymnastics. Probably not a great idea, and probably asking for injury. I'd love to see someone shift a Century in street trim, in competition!!

I'd love someone throw a 2-ton luxury sedan sideways, would be quite a sight.