Despite the JZA80 street car having gone out of production four years prior, it was a sad moment back in 2006 when the Toyota Supra competed in its final Super GT race.

But things have a tendency to come full circle, and in exactly 31 days’ time we will see the all-new Supra in GT guise when Gazoo Racing pulls the covers off it at the 2019 Tokyo Auto Salon.

The dimly lit silhouette that we’ve been teased with is all we will see until TAS opens its doors, but you can already make out a very modern Super GT approach where only the roofline is retained and the whole car seems to be cut and dropped around its four wheel arches to give it that unmistakable GT racer stance.

This will no doubt help the marketing push for when the long-awaited, highly-anticipated and overly-hyped road car hits dealerships later in 2019. Hell, we might even see another camouflaged, pre-production ‘concept’ as well if we keep our fingers crossed.

Jokes aside, Toyota will also have the Lexus LC Nürburgring-spec race car, the TS050 Hybrid from the WEC series, as well as the Yaris WRC on display at the Makuhari Messe events center next month to show just how invested in motorsport it is. Let the countdown for TAS 2019 begin! 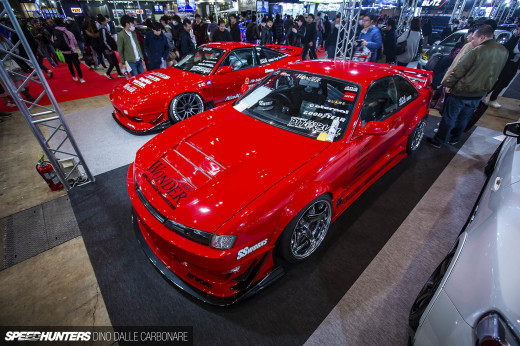 Pray to the car god it's not absolute shit

Have some faith
Tetsuya Tada, the man behind the old and new Supra, said that this is not a rebadged BMW and it will be a great tuning platform especially for a 2JZ swap
I think the new Supra will be a great car

its going to be a GT car not a performance car and since its a BMW extremely fragile to tune and unreliable.

It is not a rebadged BMW
Ask Tetsuya Tada

no its a BMW, toyota doesnt make anything for themselves anymore, people will buy shit if they put there badge on it like the mazda 2 sedan

If you're simply crying about only the supra, have a look into the "halo" cars toyota made, quite a lot of them are joint ventures, quite a lot with Yamaha, 2000gt which could have been a nissan originally, 1JZ and 2JZ. So your "it's a BMW" is reasonably hollow as it's nothing new from Toyota. Pipe down.

I hope there will be actual experiments or challenges done between a Stock Mark 4 and a Stock Mark 5, because that would be lit? Right Fam Squad? Am I hip or cool yet?

no. there wont be, of course the original supra will always be better with its 300hp and whatnot. >.>;

stock vs stock the mk5 will for sure win by miles, and i guess a lightly tuned mk4 with around 400hp will still be slower on track despite having more power

I think the BMW engine can still be tuned pretty well, I think Nostalgia is the main factor making people upset.
Who knows? Maybe the new Supra is taking this long because Yamaha might be tuning it right now, so technically, the new Supra will outshine the Z4 or whatever first in order to set it apart.

A 2JZ swap would be nice especially for the new Supra

Nothing says "modern performance" like a super heavy iron block.

hi we took a BMW z4 and basically put a toyota badge on it and some toyota interior accessories.

Oh so you work at the toyota facilty that is building the car? Just zipp it already ffs.

Guys stop hating on the new Supra
Yes it is part of a collaboration between Toyota and BMW but this is nowhere near a rebadged Z4
Tetsuya Tada, the man behind the old and new Supra, said that this will be a great tuning platform and a 2JZ swap is allowed
At least I am excited about the new Supra

Undecided how I feel about this overall. If the platform is so good, why would the need to swap a 2JZ even be brought up?

Guys, what we're going to see is only a body kit. Super GT GT500 cars are carbon tubs with a 650hp 4 cylinder turbo.

Why would I buy one for 150k and then drop a 2jz in it? Have fun with your halo overpriced car Toyota. Thanks for the boxer in the toybaru. If the guy behind the car is saying DROP A 2JZ in it after paying us gobs of money for it and it might be a good car.... UH OH!

I think he just knows the market, and therefore knows that the swap will happen regardless. The biggest problem with this car is that fanboys are too stuck in the past and resistant to change. Wasn't the A80 hated at first because it was such a departure from previous models?

Or you guys are just forgetting that this is all marketing BS.

Seriously, that's like me selling you dinner at my restaurant and then telling you to throw an apron on to cook it. If you think that's sane then I would strongly urge you to buy a macro economics book instead of your next ticket to a motorsport event because that's !@#$ing crazy.

MK4s were big heavy piles of crap too though (as is the 2JZ) so I have no dog in this fight. Place nice guys.

Install a simple ECU tune on these modern BMW turbo engine and you’ll get 400hp without any other engine modification, AND you’ll have a chassis stiffer than the LFA with a center of gravity lower than the GT86, which means it’ll handle so much better than the mk4. Stop relating to that single turbo mk4 with 1000hp that “your uncle owns” to the new one. Let’s be realistic, those 1000hp supra is probably has stupid turbo lag and not what you’d call a fun car. More like a scary car

1000hp does not equal turbo lag. That is a very dumbed down statement.

Right, because turbos don't run on exhaust gases which require velocity to get going. All turbos have lag, you just don't feel it as much in a well tuned car.

If youre a half decent driver you can feel it in even the best cars. I've never been in 1,000 horsepower car that didn't have lag and used to work for a shop that specialized in them. 6-8 liter V8s by the way that can push tons of exhaust gases. These were twin turbos setups too...

...sorry what was it again you were saying? Most 1,000hp Supras have shit loads of lag. It's just physics ace.

Well GT500 car aside which obviously as it's stated won't be more than a Supra-looking carbon shell over a carbon tub with Toyota's 2L race motor...I'm giving the benefit of the doubt to Toyota for the street car. Aside from the fact that they even bothered to bring back such an important halo model by listening to fan's out there is already amazing. It's a hell of a lot more than a lot of other Japanese manufacturers are doing. Let's at least see it, drive it, get a feel for it before we dish out the criticism. I for one can't wait to borrow one for a week or two.

Super Street ran an article in their Red Issue (not sure if it's still on shelves) where they got to test drive the pre-production model. It's a very open-minded take on the car, and the guy came away from the test drive very impressed. Personally, I have no worries about this thing getting big in the enthusiast and tuner communities.

why can #1 selling automaker in world NOT make own engine or chassis for flagship sports car???
NICE Z4

What would you do given the job of economic performance of the company? Spend tens of millions or more developing an engine or buy in one that is the package you want?

make none!!!
it been gone almost 20 years, why bring it back and fail?

You kind of answer your own question: for money. They don't give a shit about the legacy of names anymore. Those times are gone my friend. It's all run by stock brokers and accountants now. No more innovation.

It will be quite odd seeing a GT500 and GT300 Supra in the same field, although I assume it will probably be just like the Nissan GTR GT500 and GT3. I simply cannot stand the idea of it being in nascar though, that just hurts me.

Why? NASCAR is big money for manufacturers. More than this drifting nonsense and it takes far more skill according to Ross Bentley who is one of the top driving coaches in the world. I'd love to see it take the fight to Ford / Chevy on American soil.

I think its nice to see that Toyota is finally using a sports car to campaign in NASCAR, rather than a Camry.