The Stance Is On

Come with me on a walk through this year’s StanceNation event in Odaiba.

As you’ll soon see, this post is laid out more as a gallery, almost like the way you approach a gathering of this magnitude. You stroll along and across the lines of cars, only stopping to take a quick look around what catches your eye. It’s as if you’re scrolling though a massive blog posts with hundreds of cars for you to see, except here the scrolling is being done by your feet rather than your finger.

With just shy of 1,000 cars present at StanceNation, the usual carpark that hosts countless other car-related events over the course of the year was close to being filled all the way up. That meant a lot of walking was called for.

But fear not, you can do it with your finger right here. See, we like to make your life easier and feed you car culture direct from Japan in an easy to digest layout.

I’m going to start things off with an NSX, a model that we’re seeing more and more of in this fitment-oriented scene, despite the Honda’s continuously increasing value. There’s nothing too wild about this one; simple aesthetics and a set of white Work Emotions give off an instant NSX-R vibe.

Another appreciating Japanese car that we continue to see given the stance treatment is the R34. I’m sure I picked the right one to spotlight; in this day and age we should all know to never over-accessorize.

It’s hard not to love the Japanese approach to modifying. Year in and year out they never fail to educate us on how to make cars look their best, nail setups, and come up with cool experiments of marrying new and old. This newer Crown Majesta with BBS mesh rims is a great way to illustrate the point.

Then of course there’s the fender game. Yes, Japan still rules here; whether it’s simple flares, custom fabricated ones, or massive overfenders, they do all of them so well.

Another thing you’ll see at events in Japan is the cliques within. It’s all pre-organized, of course, but you’ll often see groups of friends belonging to the same team, or customers of the same shop, making sure they drive into venues together in order to make a little model or tuner-specific display.

But whatever you come across, you know that the owner has tried their hardest to come up with something unique. If they hadn’t, they probably wouldn’t have been there.

With something like 2,700 entry applications, Elvis at StanceNation had his work cut out for him selecting the best possible cars for the show. Overall there was a lot of freshness, lots of new builds I hadn’t seen before, and plenty of reworked cars to give a well-rounded selection.

Between the N-Style and Hayashi Racing displays, I found two hot Nissan kyusha. One was this Yonmeri Skyline, which sported must-have touches like shark face extended fenders, fabricated arches, and a race Hakosuka-style oil cooler mounted on the bumper.

The other is a big favorite of mine, the 330 Gloria coupe.

I have a thing for massive coupes, and Nissan really nailed it with this thing. Sitting low on a set of Shadow Racing wheels, this example beautifully highlighted the best from an era when Japanese car manufacturers had individuality. Sure, there’s lots of American muscle car elements in there, but it wouldn’t be a ’70s JDM car if it didn’t.

Are you winking at me?

We couldn’t talk about the oldies though without a gratuitous shot of at least one Kenmeri. I’m loving the yankee feel about this one.

After hours spent at the venue I realized that I had only covered around 40% of the cars there. So much to see, so little time…

By this point I was also beginning to think that the extreme examples of onikyan were all but gone, but I was soon proven wrong. I love seeing these cars; they look so wrong – like they shouldn’t even work or be a thing – but they do and they are still.

It shows that their owners are not only experimenting, but pushing the boundaries of what is considered right, or worth doing. But it’s all in the name of personal expression, and when it’s executed in this way I’m all for it.

I mean, look at this silliness! It’s great that this is still a thing, but it’s not really a surprise given that Japanese people doesn’t criticize. It’s the opinionated outside world that does, and of course none of these guys really care about that. In fact, most are probably oblivious to it.

We are, however, seeing less of these cars coming to Odaiba, something that spans from that incident caused by a certain publication, which has since made life for us car guys hard in the city. It’s one of the reasons I’ve yet to put my GT-R back on the road; I’m patiently waiting until all the attention dies down.

But enough about that – let’s take a look at badass S-chassis.

I’m such a sucker for RPS13s, especially clean ones like this.

If this sort of aesthetic could be matched to proper function, that would be a true winner.

And speaking of that illusive mix of form and function, here’s an S13 from Exclusive, a drift team in Tokoku.

There’s some pretty cool fabrication going on at the front end, specifically tubbed fenders and tube framing to mimic what you’d see on a D1 or FD car. It’s cool to see grassroots drifting evolving in such a way.

I heard the Z33 screaming for attention, so here’s a couple of top picks for you starting with the Nakamuraya demo car rocking Speedhunters stickers. These are the guys that along with Tokonatsu Factory transformed Project GT-R into Project Hulk for this year’s Tokyo Auto Salon.

I’m not sure what to say about those wheels on a Fairlady, except I don’t mind them at all. Let’s leave it at that.

This car nailed it in every way possible, from the choice of wheels and brakes to the black lip spoiler and matching skirts that run along the sides of the car. S2000 perfection in every way – not too much, just enough.

Another thing I like seeing is new cars getting attention. The new  Toyota Crown Athlete has only been out since summer, and this example all the way from Sapporo up in Hokkaido is already boasting a hot aero kit and sick modern-day VIP fitment.

In my car park travels I eventually came across more vintage-ness in the form of two more Nissans, both purple. One a butaketsu Laurel, the other a yonmeri that was so sexy I just had to use it as the opening picture.

There’s some L28 goodness right there. The smell of unburnt fuel was looming in the air.

Butaketsu translates to ‘pig’s butt’ in case you never heard that nickname; it refers to the rather large posterior of the C130 Laurel.

Yes, please! I think some further investigation is required here…

This 964 cabriolet made it along to Speedhunters Live a couple of months back, but I was so busy on the day that I never got a chance to check it out properly. It’s easily one of the cleanest examples I’ve seen, and those BBSs and the wine-red top really set off the timeless exterior.

Although these are the politicians and CEOs number one choice in Japan. Why bother spending the equivalent of a nice 23.8sq/m apartment in Tokyo on a Rolls-Royce when you can have twice the space and a decent amount of luxury with a Toyota Alphard. I’m a big fan of these vans, and I’m not involved in organized crime or politics.

And check this out, a Prius PHV slammed and all stanced out.

I want to see the Nissan Leaf Nismo get the same attention next – hybrids are so yesterday.

I hope you enjoyed this stroll though this year’s StanceNation show in Odaiba. This will be the last one at this venue, as next year (after April) this site is getting taken over for more Olympic Games construction.

That means all the events that have called Odaiba home – JCCA, D1GP, Mooneyes Street Car Nationals – will have to look elsewhere for a suitable location. The fear is there won’t be anywhere else in the city that would accommodate (read: tolerate) a car-oriented event, so at this point we can only hope that somewhere is found. 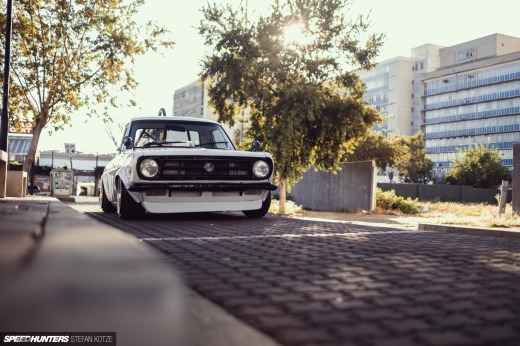 This Little Nissan Truck Goes Sunny Side Down

The variety of cars is what gets me the most! If there was a certain style, it was there! Everything from purpose-built to widebody to boso! Now we just need this kind of selection in America. It seems here that you either tune or rice while in Japan, there are so many options! Love it!

So many great cars, so many terrible crimes perpetrated upon them.

lol I love how there are people in this world that hate modifications this much. Like someone owns a car, does what they want to their car that is unique and well done, and because someone doesn't like it they hate on it. Me personally, if someone does something crazy but well executed, more power to them. They created a one/one car.

Well unless these are showcars that go to the show on a trailer there are reasons to feel concerned when such cars with stupid camber and tire mount are driven on the road. They are at best safety hazards.

Couldn't have said it better myself. Personally, I'm not a fan of big camber and those wiiide popped fenders, but I can always respect a good build.

Ya'll should rename the site to parkinglothunters.com

ya'll should just stop coming to the site if something that you see on the internet upsets you this much :^)

Absolutely. How about coverage of a "StanceNation track day"?

Weird....I thought this was SH not SW

Japan is way too cool. Will NEVER get over it.

You have to do A LOT to get a guy like me, who believes that safety's a matter of perspective, to argue against something on the grounds that it's unsafe.

Slamming a car like this, with the wheels are splayed out like Godzilla stomped it into the pavement like a cockroach, not only looks stupid but it grotesquely compromises the car's real-world usability.

The people who defend stancing a car make it sound like anyone who criticizes it is doing the equivalent of trashing the car's owner for wearing the wrong colored shirt.

wow, someone has a different opinion on modifications than you do, they must be stupid. smh people need to like what they like, do what they want, and not bash what someone else thinks about car modifications.

stance has it's place but on a rally celebration special. No, I'm so triggered gaaad damn.

Geez, Dino, please supply tissues for all these sooks next time!
Great coverage, cannot wait to see photos of more hard parked cars. Japanese events like this ALWAYS impress, even if the style ain't your thing.

I really don't get all the hate, that often spawns after those articles. I'd consider myself a functional guy and somewhat of purist, but I still very much enjoy these articles as well. Speedhunters isn't only about racing or being fast in general, it's about carculture in all its forms and this right here is a prime example of well living and breathing carculture. If stance is not your thing in general, then don't bother clicking on the article.
Me as a non-stance guy really enjoyed this one and I think the take on the builds, aswell as the clean and entertaining phtography of Dino make up for a well ejoyable read.