SHARE Purist Group Winter Drive: A Car Meet For A Cause

Ever since its inception in 2012, the Purist Group has been organizing events to unite the car community and scale its resources for a common mission: to help those less fortunate.

Though it initially started as a Facebook group of car enthusiasts who enjoyed driving Southern California backroads, Purist founder Sean Lee began focusing the group’s efforts on a higher purpose.

Before Sean became influential in the automotive community, he was dead broke, driving a faded AE86 coupe (it was a GTS model with limited slip, though). If you ever sit down with him and listen to his story, you’ll learn that he lived through some pretty rough patches in his younger years.

This being said, Sean decided that he’d try to create some change in the world by pooling the change in the group’s pockets. With a lot of hard work and resourcefulness, he acquired more resources to carry out the Purist Group’s mission.

This was the start of the Purist Group Winter Drive – a car meet for a cause. Sean decided to scale his efforts by rallying support from other auto industry friends, pro racing drivers, members of the media, car clubs, business owners, local law enforcement, political figures, and other organizations like Reach Out Worldwide, the disaster relief organization founded by Sean’s close friend, the late Paul Walker of The Fast and the Furious fame, and run by Paul’s brother, Cody Walker.

When the Purist Group Winter Drive first started, the turnout was pretty dismal. Sean had to personally reach out to his network of car friends, business owners, wine aficionados and watch collectors to support the cause with donations of toys, school supplies, and food, which are then distributed in low income communities to put smiles on the faces of children and assist them in learning. The event has since grown exponentially every year.

This Pandem Mazda MX-5 owned by Tommy Babiarz came all the way from Florida, and it has some pretty cool details on it. Do you think I should shoot a full feature?

The mix-up of car types is just as diverse as the attendees. Check out this Bugatti.

There were also quite a few muscle cars and lowriders in attendance. I was digging the cleanliness of this 1964 Chevy Impala.

At the event, I bumped in to my longtime friend Sandra, who was a model at the very first 86FEST back in 2012. She wasn’t modeling at the Toy Drive, she was just there to show her support for the Purist Group. I think it’s cool that her boyfriend has an AE86, too. (Not the one in the background – he didn’t bring his to the meet.)

After shooting some photos of her, I politely asked Sandra to move out of the way so I could admire the red AE86 owned by Steve Nakamura. It used to be a black and white panda scheme Initial D replica, but I like this all-red tribute to the Running Free AE86s much better.

While walking around the event, I noticed this super-clean white 1972 BMW 2002 on red BBS mesh wheels. It wasn’t until I started talking to the guys in the car that I realized I knew them; I used to frequent their gas station 10 years ago when I was regularly shooting for Speedhunters. I just didn’t recognize the car at first because the last time I saw it, it was still in unrestored condition. It shows how much progress one can make on a long-term build if you stay focused on it.

Until I saw this thing driving around at the Purist Group Winter Drive, I had no idea Lamborghini even made an SUV. Apparently the LM002 was first introduced in 1986 at the Brussels Motor Show, and eventually one was even purpose built to participate in the Paris-Dakar Rally.

You have to love the 993 – it’s one of the most beautiful body styles of Porsche 911 around. This one had a RWB kit, and I just love the dark blue color.

There were quite a few R32 Nissan Skyline GT-Rs at the event; it was almost like the car isn’t even rare. This white one with a Garage Saurus emblem caught my eye.

There were a couple blue Skylines with details that caught my eye, too. If you owned an R32, which wheels would you prefer on your car – the five-spoke Panasport G7s or the gold BBS mesh?

Seeing this JZX90 at the event was so cool; it made me think of the days when you could see random JZX90s driving around on the streets of Tokyo, and you could buy them used for something like $3000 or less. It’s not quite like that anymore, as the JZX90 is becoming more expensive and rare in Japan now. Actually, everything with a 1J or 2J engine seems to be going up in price these days. Anyway, this one was for sale. Hmm…

Can you spot the Speedhunters sticker and tow strap on this Rocket Bunny wide-bodied ZN6 FR-S? I noticed the 86FEST sticker on there too – very cool.

While walking around at the end of the event, I couldn’t take my eyes off this gorgeous right-hand drive Mercedes-Benz 280SE from Jamaica, which was lowered with air suspension. It makes me want an old Benz.

The Purist Group Winter Drive was a massive success; this year’s event was bigger than it’s ever been, and literally truckloads of new, packaged toy donations were collected from attendees. It’s so great to see the car community banding together to do some good in the world. If you’d like to get involved in future events, you can follow these links to the Purist Group on Facebook and Instagram.

More Stories from California on Speedhunters 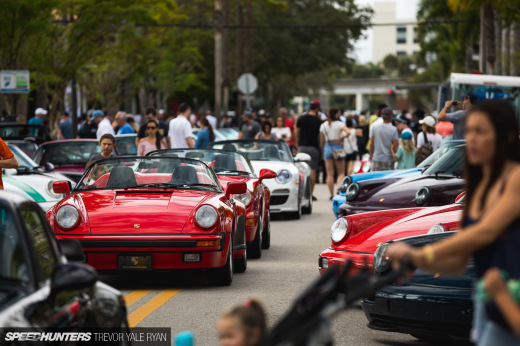 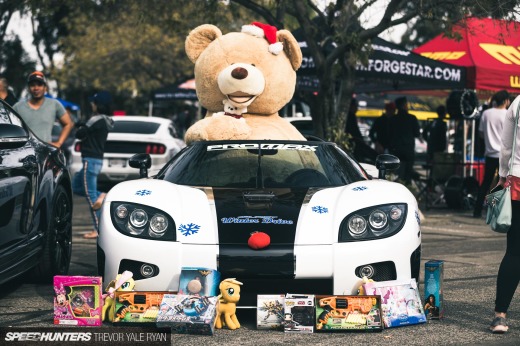 Doesn't Sean Lee now own an NSX? I think I may have seen a video of his car on the petrolicious youtube channel.

but he still has two AE86s!

yessir! I think they're actually out today distributing toys!

Sandra... You are beautiful!

she is! You can follow her on IG : @thesandrawong

Thanks Jay. I clearly need to go refresh my Porsche knowledge. It threw me off cause the owner's IG name is @rauhwelt

you really should shoot a full feature of that MX-5!

Damn! More proof that I only know about Toyotas. Sorry man. *facepalm*

"Purist" is an odd-but-fitting choice for a name. Here it seems to mean "car fanatics as philanthropists." Maybe. I'm reading their site and scratching my head, thinking they're sort of channeling the lust-for-life aspect of the driving experience-- particularly the ZOOM feeling we all get from taking our favorite cars on our favorite roads-- and using that upbeat vibe to help out those who don't have the opportunity for it. So the "purist" quality is in being a genuine human, perhaps?

You're right - car fanatics as philanthropists seems to be a good description. Originally though, the members of the group were guys who loved to drive canyons and trackdays. It has definitely grown quite a bit in the last few years!

The Rocket Bunny GT86 looks so good with the dark outline on the widebody!

Actually, the LM002 was meant to be the "Humvee"-pendant for the Italian military.
But it lost the contest, so Lamborghini refined it into a luxury vehicle and sold a handful of them to private owners.

Thanks for chiming in Max! It looked really interesting - I wish I spent more time looking at the details!

Whoever owns that FRS should re-do the kit, it seems kinda bent out of shape on the left fender.