Speedhunters Live was nothing more than an idea up until a couple of months ago. Ideas are easy to come up with, but to actually take a concept and turn it into reality is much harder than most could possibly imagine. But here I am, the day after our first event, thinking, ‘Holy crap, we did it!’

It was a great partnership that allowed us to bring this idea to life. The event concept has been there for years, but how to approach, implement and sculpt it into something that was our own was the real challenge. Teaming up with our Japan distributors, Hashimoto Corporation, and the guys behind RevSpeed, who are responsible for some of Japan’s most respected tuning magazines, we got to work.

So what is Speedhunters Live? Well, I’ll let you in on a secret – up until even the night before, we didn’t know exactly what it would end up being. You can plan as much as you want, but it’s how people come together, how an atmosphere slowly builds, and how you are left feeling afterwards that makes a show a show.

What Speedhunters has that makes it that little bit different is a decade’s worth of interaction. We are always out there, meeting people, covering meets and shows, visiting tuners, featuring cars, doing shop tours. We are a tangible entity, we are known and are friends with the people, characters and brands that make up what we broadly refer to as car culture. We don’t discriminate, we appreciate all styles, we see the love that people put into their cars, we crave variety and we commend innovation and execution.

We aren’t foreign brands that come to Japan once a year, set up a meet, and then leave. We are the friendly guys that bow and say konnichiwa to you. Maybe you bump into us at a big event, or maybe on a calm chilled night at Tatsumi PA. We’re always about.

Ron has been with us for a couple of years now, sharing his passion for grassroots Japanese car culture through his posts. But his true calling is creating films.

To lend a hand, we brought in Phillip Koenders, an Australian filmmaker who’s currently in Japan, to help Ron capture the event. The guys are putting together a cool edit to immortalize the event as I write this, but until then here’s a little preview to whet your appetite.

Blake started his collaboration with Speedhunters while he was still in Australia, but since moving to Japan a couple of years ago he’s been giving us his angle and take on the the craziness that we are privileged to be a part of here. He kept everyone updated on Speedhunters Live through our social channels, with engaging posts and live streams. Both Ron and Blake will be sharing their own takes on the event, so stay tuned for those this week.

We had the support of some awesome brands for this first event, starting with RAYS who we’ve been working closely with for a long time now. Along with their latest wheel selection, they brought out the Varis Honda Civic Type R demo car and the Solid & Joker Toyota Supra and Mitsubishi Lancer Evolution.

A massive thanks goes to Kei Miura and his TRA Kyoto crew who turned up with a massive line-up of cars, including the newly-completed Datsun 620 truck we saw earlier in the year. This is something he really wanted to get done in time for Speedhunters Live, and it’s now looking sick as hell in its ratty, no f*cks given state.

In front of the Speedhunters booth we had a small SH Garage display made up of Project Drop Top, Project GT-R and Project NSX. It was pretty awesome seeing these three cars on display together, and the buzz that the Speedhunters pop-up store was generating with our new limited edition 08|18 designs.

The best part of all, however, was being surrounded by family and friends. They are the real heroes behind the scenes that offer unconditional support, put up with our long working hours, and are always there to help and dish out smiles whenever things get tough.

The other heroes of course were our Japanese friends; from the 300 owners that entered their cars and joined the party to the companies who came to support us.

Blake, Ron and myself were lost for words. We were incredibly humbled to see so many people take the time to come and join us – it honestly was overwhelming.

You see, time just seemed to slip through our hands. With so much to shoot, so many people to talk to, so many show proceedings to be a part of, we had no idea how hard we had to work.

Another high five goes to the RWB crew: This is a group of people whom we hold very dear and one which we almost feel a part of after all these years. They showed up with five awesome cars which you should be pretty familiar with.

We strived to bring together the same variety that makes Speedhunters special. With that in mind, how could we not have some of the most important, historical, and meticulously restored Nissan creations from TA-Auto? These were the most valuable cars at the event, and even if they didn’t resonate too much with the younger crowd, those that knew, knew.

Big props to King Kustom who showed up with some of their custom Triumph and Harley-Davidson creations. They were our sole bike exhibitor and a side to Speedhunters Live that we will look to grow in future.

In typical Speedhunters fashion, Blake and I are off to Australia to cover the World Time Attack Challenge later this week. There’s no rest for the wicked, but don’t worry – we will be bringing you more from Speedhunters Live before things kick off at Sydney Motorsport Park.

Once again, thank you! 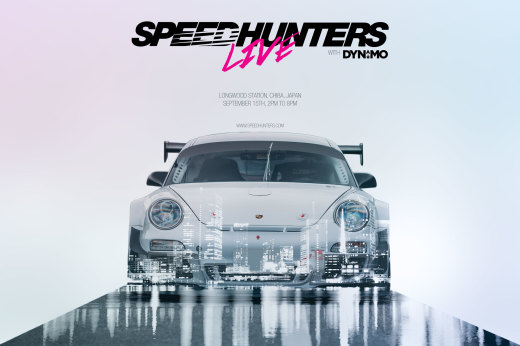 I am glad I could attend this one! And very happy it could take place at all!
Most of the cars there were way out of my comfort zone but the atmosphere was really nice, in this typical Japanese mutual respect. I wish we could have exchanged a few words but all the crew seemed over busy so I did not want to interrupt, another time maybe

Unfortunately I could not stay until the end but I really enjoyed my day! Next time, you need to arrange some track day

Thanks for coming to this first event!

"We don’t discriminate, we appreciate all styles, we see the love that people put into their cars, we crave variety and we commend innovation and execution."

This is #1. I wish more people would understand what this really means instead of spewing hate left and right. The more I look at photos from the event, the more I am bummed that I couldn't go. I'll be there at the next one, I promise!

Thanks man, at least in Japan we don't get any of that negativity. That's why culture is able to grow here

Out of sheer humor, I will say this:
B I G M E A T Y W A N G O N S 1 4 K O U K I !
I know that wing looks stupid, and probably won't ever be used to its maximum ability, but at the same time, the craziness of the car is also unique. And that to me is enough to make a good car.

Ahh Blake Jones!!! I miss having him as a regular contributor on here. Same goes for Taryn Croucher. I loved their stories of when they flew out to Japan for a summer and bought a jzx drift car.

Oh you are right Paddy, my mistake. I do wish Blake would post more often though. I miss reading his stuff more regularly. But I understand the life of a speed Hunter is not an easy one.

That makes two of us, it's always a pleasure to see new content coming through from him.

Agreed, been missing Blake and the NSX build at minimum. Blake has a very easy to read and digest style, and also has been responsible for some of my more-enjoyed features.
C'Mon Blake, you have a following here!

"So what is Speedhunters Live?"

I still do not know from your post, Dino. I don't follow SH's other media channels religiously. Spell it out for me please. Is it a car show that is covered "live"? The cars look rad, but I am missing the big picture.

It's a musical.
Coming this winter Speedhunters on Ice!

My guess is, it's all of what you get on this website, but live, in person, at a meet. No rules, show up with whatever car and style you have, and have fun while enjoying other people's takes on the car culture.

It's Speedhunters in a live format, what we are online but there in front of your eyes, the cars, the characters and us the guys behind it : )

Grats guys, I'm 1 of the many guys who could support you from behind the screen only and wished the event to be "positive".
1 request: I know the logistics (and budget) are not easy to make it frequent and international, can you revise your ideas (if it's not already on your mind) to make it, let's say, each year in a different region/country?

What kit does the E90 have? Looks awesome!

Yess ! I was just about to ask the same ...please someone help!?

Excellent concept with SH Live, good luck with it.

Do you have any infos about the 964 convertible in your last picture, Dino?

Is that an original paint?

Keep up the good work =)

I plan to feature that car...so we'll find out soon enough

Congrats and thank you for continuing to cover and contribute. I visit the site daily and am always pumped for your content. Wish I could attend a US SH live!

I would love to take the event to the US!

Will you have the 08/18 gear in the online store in the future?

Great to hear it went so well as a first ever event. Naturally it deserved to!
Usually with these things, subsequent years make bigger and ever more exciting events.
I was disappointed we couldn’t make it this year, but I hope to attend next time.

Hi, I really wanted but I couldn't make it this time.
Are you planning on doing this again in the future like 15th anniversary?
Hopefully not as a watcher but as a participant and get featured in your story!