While it’s a known fact that Ocean City and this year’s H2Oi event didn’t really get along, I didn’t expect to have an encounter with the law so quickly after arriving in town following an 1,100km road trip in a Ford Mustang rat rod.

For 2018, The official H2Oi event was moved to Atlantic City and many of the purists and enthusiasts headed that way as the organizers had hoped they would. But as expected, it didn’t stop people heading to OC for an unsanctioned few days of partying.

Anticipating this, Ocean City Police were absolutely everywhere. State troopers, the county sheriff’s office, and many other law enforcement agencies from surrounding areas were also brought in for support.

Last year, Kyle Scaife – AKA MustangKyle – didn’t want to risk getting impounded, so he kept the cruising to a minimum. During the times he did venture down the strip, he didn’t run into any issues with the law.

This year, it didn’t take long to find ourselves lit up by the blueberries and cherries of the local sheriff’s office. After arriving in town and getting settled in to our condo, we drove over to the local Walmart to pick up some groceries and take a tour of the area.

After a quick chat with some fellow car folk in the parking lot, we headed out to Starbucks to grab something that would warm our damp bodies up. As we pulled into the lot, we immediately spotted two empty sheriff’s department Suburbans parked outside. It was hard to tell if the deputies had noticed our arrival, but they were definitely intrigued when they came back out of Starbucks with their coffees.

One of the officers remained in the parking lot on his computer while the other left. Kyle was a little nervous; his car was street-legal by Ontario standards, but who knew how it would fare out here. We clambered back into the Mustang’s cold wet seats, fired it up, and headed back onto the highway. So far, so good.

But we weren’t in the clear quite yet. It turned out that the deputy who had left Starbucks before us was waiting on the shoulder of the highway a few hundred meters down the road.

He followed us into town and then lit us up. Kyle pulled into a liquor store parking lot and another three patrol cars pulled up behind us. Kyle chuckled; four cops versus a rat rod that was barely street legal – it wasn’t going to be an easy battle to win.

After what felt like a torturously long few minutes, the deputy that pulled us over approached the window. I hid my camera and kept my hands still in plain sight.

“You know why I pulled you boys over?” he asked. Kyle answered right away saying it was because he flipped his lights on only after he pulled onto the road (Kyle doesn’t start his car with his lights on due to a weak alternator). But that was only one of the reasons. The deputy then cited numerous violations and issues he had spotted with the Mustang before heading back to his car with Kyle’s registration and license.

It could have been much worse: Kyle received a grand total of five warnings and was threatened multiple times that his car could be impounded. The first warning was just an excuse to pull us over due to Kyle turning on his lights after entering the roadway. The deputy also claimed that the rear taillights did not have reflectors in them (his lifted Suburban’s lights missed the entire rear of the car and the reflectors), but after Kyle challenged it the officer went and checked them with his flashlight and admitted that they did in fact reflect – but he still gave us a warning anyway. The next warning was because of what the deputy claimed to be modified and unsafe suspension, even though it was stock ride height and perfectly safe. Having no side mirrors is something that can’t be contested, but the final warning for headlights not being 24 inches from the ground is absolute shite.

We were allowed to go with our five warnings in hand and told very sternly that if the Mustang was seen on the road in Ocean City again the outcome would not be good. In the end, both Kyle and I were thankful that we didn’t get arrested or have the car ticketed or towed.

It’s the simple joys of H2Oi… 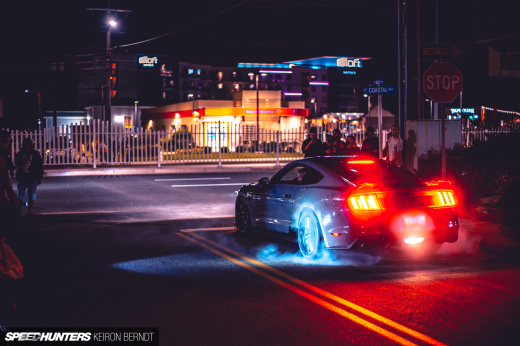 H2Oi: The Beginning Of The End

I thought this only applied to new car? And, how tall was headlight of Corvette C5/C6?

Apparently, it's MD law for all cars.

Much like most of this type of car culture, It's gonna be gone before I get the chance to even dream about thinking I'll make it to the event.

You wrote an entire piece about getting a (warning) fix-it ticket...so dramatic. You do not get arrested for vehicle code infractions, no matter how many you stack up, especially from the passenger seat. With the title you chose, I can see you have a bright future in news media..."Us Versus Them." They could care less about you, but I'm sure they've seen their fair share of cut up heaps that resemble exactly what you're riding in. Why wouldn't you expect a ticket? Just take it for what it is and move on like a big boy.

A little salty, are we?

Salty AF. You don't know the meaning of the word...

Barely legal vehicle gets tickets for lack of road worthiness.
Warned by law enforcement of possible impounding but no further action.
Free to go.
This isn't really a story is it?

It IS a story for the poor peasants who can only afford to live vicariously.

He's posted articles of the whole journey, in which he mentioned the possibility of being ticketed because of how the car look. This is simply giving closure to those statements, jou naai.

I was under the impression that you have to follow the laws in the county (or country!) your vehicle is registered in, NOT the one you're currently in. So if it's legal to have headlights that're dragging on the ground in Bumfart, FL, it should be perfectly fine to drive that car in Uptightsville, CA.

Is this not how it really is?

I asked the cop and he told me it is the other way round. If FL says you can have 3 lights but MD says 4, you have to stop and get a 4th before going into MD.

Unfortunately, there does not appear to be reciprocal agreements between Canadian Provinces and US States of this nature. The only existing reciprocal agreement I can find is between the US and Canada regarding Commercial Vehicles and their operators. It would not surprise me, however, if such a reciprocal agreement does exist. I, personally, would hire an attorney to have tickets of this nature dismissed and be perfectly fine suing the officers for issuing the tickets. You probably won't win the latter lawsuit, but it could be settled by having the officers take remedial courses in interstate and international traffic laws.

First tickets of H2Oi? You weren't at H2Oi. Drama queen.

Move along. Nothing to see here...

Rubbish story mate.
John best what do you mean,is it because you don't drive yet?
There will always be Motorsport even if the police crackdown on gimpy kids showing off their cars. (Like me in my saxo VTR 15 years ago)neons and ice galore.Thank God cruising is dead.

Complaining about this???? Just experience the mainland of Europe for a change. Then you can complain. You would have gotten about five times the amount of tickets for that car. Your laws a laugh compaired to what we have here....

Considering Speedhunters recent efforts to enlighten readers of many Police officers being involved in the modified car scene internationally, this 'click bait' type article is genuinely disappointing. It's understandable that traffic-orientated law enforcement is likely to have some issues with a (awesome) car such as this. I believe if everyone acts in a calm, civil and reasonable manner (just like the Police and occupants of the vehicle did) we can move away from the hoon/street racer stereotypes and continue to enjoy the cars and culture without issues involving Police.

Play stupid games and win stupid prizes. I feel this whole adventure could have been done in one post, not multiple.

Thanks for your input.

This isn't an article based on complaints, this is literally just his personal experience during the event and how it went. Exactly what he said he'd do in his first article.

Thanks for reading along, mate.

As a car guy, and a MD resident, I haven't been to a car event in OC in at least 5 or 6 years. Cops out there are WAY overboard with cars (Unless it's "hot rod weekend") then, you can pretty much bring anything "muscle car" wise. OC hates any other car shows, or gatherings. That's why they decided to move to AC NJ. I hate to say it, but I'd rather go to AC than OC any day. Glad they didn't impound his car, and hopefully you will never go back to OC.

I'll be back to OC, would like to try AC, but all my friends go to OC.

I think this a good story. But for those who don't know about H2Oi this probably just seems like a waste of time.

I'm waiting for the next stories, Keiron. Thanks for sharing water.

It's a battle even our grandparents fought.

Our grandkids will find out who ultimately won the battle...

not to be rude or anything but these are the worst photos for a speedhunters article...

Speedhunters readership has to chill.

check this out, i found the interesting information, so dont miss it