If the first post from my little trip around Ohio and Kentucky was any indication, folks out here have some pretty off-the-wall stuff sitting around in their garages.

It was fun to see what everyone thought this car might be, and a couple of you nailed it right away. I think at this point you deserve a good explanation of what car this actually is, and as I mentioned, after we rolled back the cover I grabbed a little start-up clip so that you could actually hear the thing. The sound a car like this makes is probably more impressive than anything else.

But let’s take a look…

As the cover came off I was a lot more surprised than I should have been. My immediate assumption was that a car like this would be worth something to the tune of $250,000, but I couldn’t have been more wrong.

Somehow, this Pontiac Grand Prix was picked up for $15,000 in almost perfect running condition. It was a spare chassis from NASCAR’s 1997 Busch Grand National Series, and it makes no sense why it would be tucked away in a garage in Lexington, Kentucky.

While I’m definitely not a big NASCAR fan I was still a bit starstruck by the car, even if it’s from NASCAR’s minor league, if you will. This level of excitement goes just as much for the motor, so, as promised, have a listen.

The start-up sequence wasn’t as complicated as I thought it would be, but the motor was earthshakingly loud once turned over. Truth be told, I was on the verge of plugging my ears as rusty dust was hastily forced out of the pipes which had been sitting for who knows how long.

It’s an insane motor with an even more insane exhaust system, and after hearing the car firsthand I really, really want to make it out to a NASCAR road course race.

But what sort of guy has a 20-year-old NASCAR for himself? Steve DiMartino, that’s who.

I can’t imagine all that many people own retired NASCAR chassis in this condition, but for the song Steve found this car for there must be many more tucked away in workshops like this. Anyhow, let’s get under the hood for a closer look at what makes this thing go.

A Chevy crate engine is wedged into the space frame, and while it’s all simple enough, the development that’s gone into the chassis is nothing short of incredible. An insane amount of money has been poured into these cars over the decades just to, for the most part, make them go fast in a circle.

As this car sits it’s set up for road racing rather than an oval track, and while it’s never been raced it looks like it’s been taken up to speed at least a couple times.

Power from the big V8 is sent through a T-101A 4-speed and finally out to the meaty rears which are fed by an old school 9-inch rear axle. Actually, just about everything on these cars in this era was old school, like the carburetors which were used until 2012, and it’s absolutely incredible to me that these cars could average 190mph (305km/h) on a lap around Daytona in ’97.

Even more impresssive are this car’s big brothers in the Cup Series which can average over 200mph (321km/h) around the oval. As far as I understand, this is in part due to a longer wheelbase (110-inch versus 105-inch), and an outrageous 14:1 compression ratio as compared to the 9:1 limit imposed on the Busch Series cars.

It’s pretty cool that the shift lever and knob are near identical to the ones I run in my own 1960s car, and it really is astonishing how straightforward these race machines are. I’ve honestly never taken a good look at one until now.

I have no idea what this particular car is capable of, but I definitely want to find out. Steve plans on generally goofing-off with it and taking the Pontiac out to Bonneville since it’s a lot safer than many of his ’60s and ’70s-era salt flat racers.

Personally, I’d love to see this thing opened up down the street from me at Laguna Seca Raceway. Being behind the wheel of this thing would be absolute insanity, especially on a legendary course like that.

I’ve never wanted a Pontiac before, but from the smells to the sounds, this Grand Prix would undeniably deliver an unmatched driving experience. Come to think of it, how much is in my savings account?

Cool! Thanks for sharing. I live in Lex. and had no idea there was anything like that stashed away.

Nice! Lots of rad stuff out that way.

I Make up to $90 an hour working from my home. My story is that I quit working at Walmart to work online and with a little effort I easily bring in around $70h to $86h.. Start today and have your first cash by the end of the week... Go this web and START your work..Good luck...

The American South may not have as many Porches and we don't have a Nurburgring, but we have a lot of cheap V8 American muscle so that's something.

I have some unholy desires everytime I see a retired stock car... "Nascarlo" like desires. But this Pontiac is way too mint to be hacked in such ways, it would be a shame if someone came with a saw and... Nah, must resist !

Engine is fair game as it's been replaced but the rest is spot on. Don't you dare!

This car was built by Bill Rhine at Rhine Enterprises in Denver, NC. It was built for Steve Husz and run at a few track day events. The race motor was pulled a bone stock 350hp Chevrolet ZZ350 was installed and it was listed on racingjunk.com for about 6 months before it sold.

Thanks for a bit more info Mr. StockCar guy.

I knew it had a crate motor in it, as I mentioned, and I'd seen some photos of it at the track. But for the shape it's in and the fact that the rest of it is pure NASCAR (albiet the lower spec) it seems a steal. I had no idea that these could be bought in that ballpark until I found this car and started looking for more ads haha!

Wonder if there are other type(s) of race one can use this car in or what use it has.

How about a four speed truck then?

I've seen some guys at track days getting their cars set up but I can't remember what for.

Trevor understood the tone of the post and offered an answer to my question. You though...

Triggere? No. I'm simply correcting you because you're talking out of your ass with a side of humor. I'm a funny guy too, see. I take pride in knowing there are people out there whose brains are operating at the equivalent of a mac in the early 90s. It's all a good time to me. Don't worry.

I suppose that being a 90s mac is in your eyes a good thing since 90s Minor League Nascar Cars are apparently the parangon of car technology.
The fact that nascar failed to appeal to half of its only market and is now losing steam so badly that the founding family is looking to sell are certainly lost on you.

Anyway, all your posts are about how you know best and whoever disagrees is a [insert vulgarity]. You make up for your vacuity with profanity so I’ll stop entertaining you.

Old stock cars are just old racecars, until they become "vintage racecars", which means they remain cheap for quite a while. It takes work to get them setup to turn left and right, but for the cost you can build something that goes faster, cheaper.

Man, I'm not so sure. A decent spec Miata will go for nearly as much. And if you want something in the same neighborhood you've got a space frame and bodywork or at a minimum a stripped interior and a serious roll cage, plus suspension, wheels, safety equipment, some aero...

If you just want to have a good time, these things seem like an awesome choice. I've seen a handful at track days here and there just had no idea they could be easily had for sub 20k.

the suspension on the spec miata puts the stockcar to shame. v8 miata and you got the best of both worlds. of course, the wheelbase on the miata is not for high speed tracks. i don't know how you can have fun driving in a circle, but to each his own.

Seems there's more and more of these types of vehicles floating around. A local fellow got a truck and somehow made the thing street legal.

I ought to check it out.

I hope more people do this.

Any details on how he registered it? What state?

Ontario Canada. I attached an image but seems to have not took. He added lights the like, not sure what all else

Two minor points from the article:
1: A NASCAR stock car is not "a NASCAR". I know you're not the only person to misuse that, but it's terrible.
2: Only the Sprint Cup series transitioned to fuel injection in 2012. The lower series still use carbs at the present time.

I've always thought that calling the vehicle a "Nass-Car" actually works pretty well, even though I don't actually do that.

Want to watch 'Merican metal go all out- go to Watkins Glen. These Former NASCAR, ARCA and Whelen (Troyer) chassis are favored tools for clowning six figure euro track toys with a set of used GT2 tires and slightly bored smallblocks. Like this guy 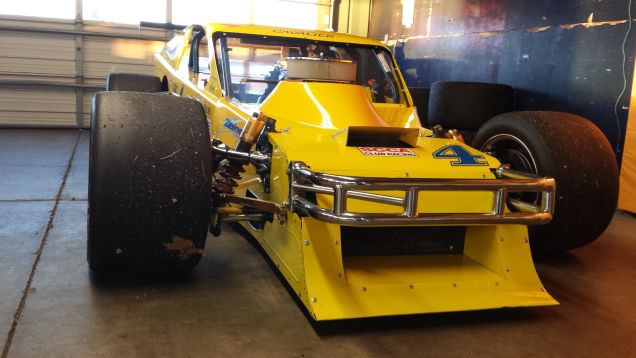 I would love to have the opportunity to one day drive one of these older stock cars.