SHARE Is There Such A Thing As Too Much Porsche?

Party In The Rear

Advance warning – there’s a lot of Porsche in this story.

Before I go any further, I fully understand that not everyone will be into it. Porsche seems to be a marque that you can either get on board with, or it holds no interest whatsoever. If the latter sounds like you then I suggest that you hit the back button on your browser and take a look at some of the other content on the front page – there’s everything from custom JDM builds to car culture in Kuala Lumpur and Hong Kong, a technical piece on parts manufacturing, and 7’s Day coverage from Japan on there right now. Go crazy.

If however, like me, you’re partial to a spot of party in the rear, then you’re in for a treat. At this year’s Goodwood Festival of Speed you were hard pushed to avoid Porsche mania.

In celebration of the automaker’s 70th anniversary, Lord March’s front garden was a homage to all things Porsche. From the point that you entered the grounds of Goodwood, you couldn’t help being drawn to this year’s spectacular centrepiece, arguably one of the most impressive in recent years.

Designed by Gerry Judah, this year’s sculpture – a bright white seven-point star – held aloft six iconic Porsches through the ages (356, 917, 959, 918 Spyder, 919 Le Mans prototype and 911R) attached to the lower points, and the final empty spike shooting towards the clear blue skies above Goodwood. Standing at 52 metres high, the centrepiece looked to defy physics, measuring just 12cm across at the base. You couldn’t help but stop and stare every time you passed it by.

Wandering through the paddock you were surrounded by Ferdinand Porsche’s creations. I’m not talking about rows upon rows of the same model of 911, like you might find at some events, far from it. These were legendary cars from all eras, some from private owners and collectors, and some fresh from the archives in Stuttgart. From the first Porsche ever sold right up to the record-breaking 919 Evo.

They weren’t being babied, parked and polished in the paddock either. Each day, out on the hillclimb there were two dedicated sessions for Porsches to attack the circuit, with guests, VIPs, famous faces and former drivers all taking turns to swap between machines.

It’s one thing getting to walk around, see and sit in these iconic cars, but it’s another to see and hear them howling past at full chat.

Icons like the 961. Yes, the 961 – this is the only one ever built, a Group B 959 essentially. You’ll usually find it on a white pedestal at the Porsche Museum in Stuttgart, but it was here and being driven at pace up a narrow hillclimb course.

Or the LMP2000 prototype that never saw the circuit. Again, just one car was made. Sadly, and for unknown reasons, this was a static-only display. Still, this was the first time that this car has ever broken cover in public, and it wasn’t roped off or up on a stage – you could walk right up to it, look inside and take it all in. This car will probably never be seen outside of the museum again.

Then there’s the original Porsche, known as 356/1. Piloted on this occasion by Mark Webber, this is the very car that started it all back in 1948 – the first Porsche ever built. Although far from the fastest (with around 35hp, 0-60mph takes roughly 23 seconds), this was probably the rarest and most valuable Porsche at Goodwood this year. A true priceless piece of Porsche history, and it was being used.

As part of the proceedings, each Porsche session on the hillclimb was followed by a celebratory ceremony on the lawn of Goodwood house, with famous Porsche team drivers, past and present, gathering to watch the procession. It was over the top, lavish and extravagant, with fireworks and a live orchestra playing as huge Porsche 70 banners were draped from the sides of the house. But why not? Porsche remains one of the most exciting, passionate and innovative brands in the industry, and is one of the few who aren’t afraid of pushing the boundaries of technology both on the circuit and on the road.

Here’s to 70 years of Porsche, enjoy the gallery below!

Picking Goodwood’s Best, But With A Caveat 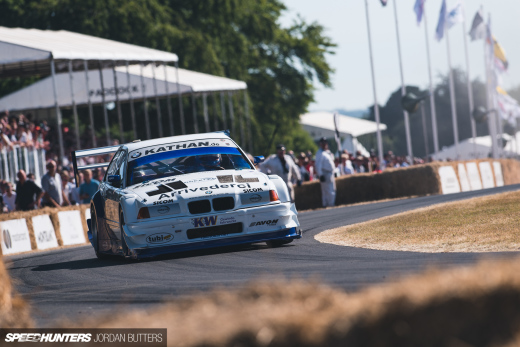 More pictures of the LMP car please. A full feature would be rad.

Check out this history piece about the LMP...not an SH feature but very very good stuff there https://www.carmrades-blog.com/all-articles/2017/7/29/dramatic-dissident-2000-porsche-9r3-lmp900

That's all I could get in the space it was in. It's not the kind of thing that's readily available for a full feature – maybe one day!

"Is There Such A Thing as Too Much Porsche?"

If anyone disagrees - they can feel free to explain their wrong opinion, but they'll still be wrong.

"X are disgusting/lame/boring/irritating/tiring/etc. Agree or explain your wrong opinion."

For instance, "Pizza is disgusting! Agree or explain your wrong opinion!"

As for Porsches being boring; I guess some folks consider it boring to be the winningest marque of all time. I personally don't. I think boring is losing all of the time. Porsches are common, because they are great cars for the money and fun to drive.

As for being a "Porsche Fanboy because of a poster or a 12k Boxster".

Nope I'm very much a genuine Porsche guy. Just finished getting a buddy into a 997.1 4S. I just moved on from a '74 911 that was built for canyon carving (adjustable bilsteins, sticky rubber, dual webers on a 2.7). Currently, I'm looking for a late 356 for myself. Eventually, I'd like to get a Spec 924/944 for track work, but I've also got other projects going that have to get finished. I like the fit, the finish, and the diversity or Porsches, they're fun to drive, work on, and own. Along with most other cars too.

Don't be a Porsche Fanboy just because you have a poster on the wall or a 12k Boxster in your garage
We've reached too much Porsche in the last 4 years and they are not worth it.

I can't help but feel that you might be more fond if you hadn't sold before the price boom?

No, money is not that important.
I buy my cars to enjoy them, i don't collect cars to make money...
And after the Porsche experience, i'm now the proud owner of a first gen 6.2 Murcielago...
No regrets at all

We hit “Maximum Porsche” at about the fourth Magnus Walker video. Back when everyone was still waiting with baited breath for him to drop some knowledge like an ACTUAL rockstar.
To anyone who hasn’t caught on yet: You’re better off just watching some old Bob Dylan interviews, folks.

The only good thing is they’ll soon become so blasé that no one will care about them for about a decade...just like the egg-headlight era. Uh, oh...I mentioned them!

I came for the rekt and stayed for the fappening.

There can be no end to speed.

Love em but yes we've reached too much Porsche!

Hmm. Did you happen to see any RAUH-Welt Porsches racing at Goodwood?

No, and it’s not like there are many in Europe anyway.
At Idlers, yes, lots.
Your point?

Since there seems to be quite a bit of negative feels towards RWB in the puritan Porsche community, I was just curious how the reception would be towards one of their cars at the event.

Spectacular Festival of speed; Porsche Passion and automotive emotion could be felt from across the pond here in Chicago. Sorry Lord March about the Chicago man that knocked you flat on your rump years ago as he was in a furry at 7am looking for the Chaparrals.

One day the 944 will be as appreciated as the Porsches before and those that have come after.

I suspect that anyone who believes there exists such a thing as 'too much Porsche' has never driven a good 911... I used to be indifferent to P cars until my dad bought an 06 Carrera 4s. Thing RIPS and is SO much fun to drive, late model 911 is a practical mans dream car.

Can't get enough Porsche?
Then I'll see you in September at Laguna Seca for Rennsport IV.
Like Goodwood it'seems not to be missed.
If you love someone give them a Porsche, nothing say loving like something from Stuttgart.

I always wondered if the car on those sculptures are real. anyone knows?

Good question - I believe they are. It wouldn’t make sense to build replicas, certainly the weight of the cars is insignificant next to the structure itself.

Too much Porsche?! That's like "too much money.". Yeah! That's a problem! Greatest marque in history! And I dont care what ANYONE says about it!