Did you check out the feature on Dai-san’s red E46 M3? Good.

Now imagine having the same task at hand – a stock E46 to play with an the idea to slam it – except this time you want to see your car sit as low as it can, but you have no interest whatsoever in dealing with all the problems that come with a static setup. Air is the solution.

As the title states, this black M3 is all about the ‘life on air’, something that in recent times has become really popular in Japan – the land where scraping your car around has always been a thing. But I guess at some point people realized that bumpers and miscellaneous other expensive bits and pieces from under the car aren’t worth the sacrifice, and that with air the best of both worlds is indeed possible.

Kayahashi-san is one of those guys. Regularly tracked at Tsukuba, his USDM E46 is also proof that a modern air ride system can also mean performance.

If you have a keen eye and a good memory you may remember me posting an image of this car from the first Idlers event of the year, albeit when it was wearing a black set of wheels.

They were the same 3-piece forged wheels as these, 18-inch Holeshot RSRs from fifteen52, which were chosen to go along with the ‘Clubsport’ feel of the car.

Michelin Pilot Super Sports, fitted in 245/40R18 at the front and slightly wider 265/35R18 at the rear, guarantee serious levels of grip.

When the Air Lift Performance 3H system is aired out it’s pretty much a photographer’s dream; the body sits low and the wheels tuck inside the fenders with just a few millimetres to spare. But to get the look right, the stance itself was only half the job.

Nailing the track look with the addition of just a few parts requires you to choose your upgrades carefully. Kayahashi-san, who runs his own garage building and modifying BMWs of all types, wanted to keep things basic, so the only thing you’ll see at the front is a Status Gruppe HRTG lip spoiler.

Balancing things out at the rear is genuine BMW Clubsport spoiler.

It’s touches like these that really make a special car that much more special.

As Kayahashi-san popped the hood, he explained that there were only simple mods to see – just enough to make the most out of the already awesome stock setup.

The intake now benefits from an aFe Power Stage 2 system featuring a larger induction pipe and filter, while spent gasses are channeled through an Eisenmann exhaust system.

For Kayahashi-san, the biggest attraction of the Air Lift Performance kit was the damper adjustability which allows the car to be just as much fun around the track as it is on the street, or all aired out and resting on the ground.

The Eisenmann exhaust is modeled to look like the stock system so as to fit into the stock narrow cut outs in the bumper. The quad tail pipes are a tad bigger than those of the factory system and have a polished stainless steel finish that contrasts nicely with the black paintwork.

The interior is a function-oriented space with a pair of leather-clad race seats taking center stage.

They replace the M3’s electrically adjustable seats, which were not only on the heavy side but showed tons of wear.

The aptly-named Renown Clubsport Motorsport wheel was the perfect choice for Kayahashi’s project as he was looking for something with a flat face to nail his preferred driving position.

You can’t tell as the key wasn’t set to ACC, but the little LCD display beneath the tachometer reveals that this was once an SMG-equipped car.

However, the single-clutch, automatically-actuated gearbox was swapped out for a good old fashioned 6-speed manual, and with that an IRP Germany Shortshifter V3 extended billet shift lever was added.

The Air Lift Performance 3H controller is tucked away out of sight, but Kayahashi-san makes sure people know his car is riding on air.

The bolt-in half cage is an AC Schnitzer item, and while it does render the rear seat pretty much unusable it adds a touch of safety if things got sticky at Tsukuba.

When he needs to take more than one passenger out, Kayahashi-san has a pretty cool E30 wagon which we’ll see in detail once I get myself up to Ibaraki and visit his shop.

That’s two out of three M3s thus far from our little impromptu BMW-themed surprise meet. Next up is something a little more modern, and a little more powerful to boot…

Super cool write up. I like technical style of storyline. Can you comment as to why I see a lot of cars have clear windows. It looks like Japanese Enthusiasts do not prefer tinting?

Maybe it's about symmetry? Like most places Japan only allows the tinting of the rear and rear/side glass, so it would be illegal to match the front side windows with VIP style tint. That's the reason I've never tinted my GTR

I live in California. Although I like clear window. But the summer here reaches triple digit temperature, so we all gotta tint them to keep the heat under control. I wish the summer here is not as crazy hot.

I actually prefer non tinted cars as it gives three dimensional deep appearance. I am considering removing tint off of my GTI.

I actually really like non tinted cars as it gives three dimensional deep appearance. I am considering removing the tint off of my GTI. 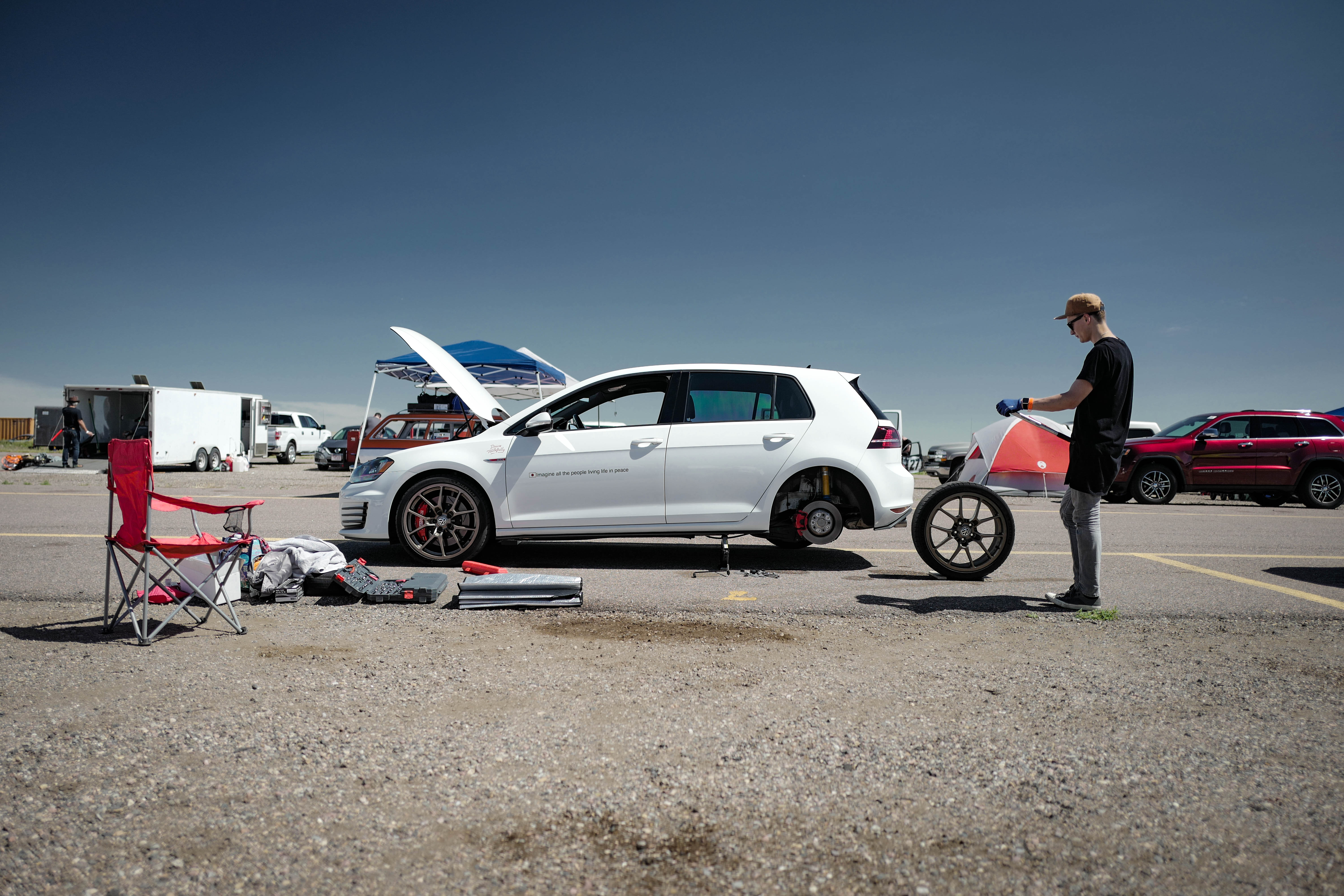 I still prefer the ducktail spoiler on E46 the remaining styles seem not good with the lines (sure CSL style is the epic choice even if its "boring" choice). And sure i dig the stance battle more than the squatting stance on the red E46.
Is the SMG replaced to meet the driver needs or it was damaged?

I have always liked the E46, it has a good look. The spoiler doesn't really seem to fit as well other than just being a cool part. Oh and Dino, I am fairly sure the SMG and 6psd transmission is the same, so people remove the SMG system from the trans and convert to a 6spd. But the actual transmission doesn't need to be swapped out for the change.

Ah interesting point, I'll have to look into that

The box needs to be modified slightly but its 95% the same.

The SMG and manual share exactly the same 6-speed single clutch box, the difference is that the clutch is actuated electro-hydraulically. The procedure for swapping an SMG for a manual is pretty straightforward and relatively common among E46 M3 owners.

The most common reasons for changing it are the astronomically high costs of SMG parts or the owner's desire to drive a manual.
Fun fact: the E60 M5 with it's magnificent S85 V10 has more or less the same SMG box, albeit with some updates.

I like the look of the E4 BMW M3. But like all BMW cars, maintenance has always deterred me from ever getting one. I would hear horror stories about the costs and be turned away instantly. But when they are on point mechanically, they are awesome to drive. I remember back in 2005 I test drove a 3 series. I loved the feel and handling.

I did some digging on them not that long ago. For the E46 in particular, the big failure points are the water pump and power steering pumps. For the water pump, the recommendation is to just replace the whole cooling system every 60000 miles (iirc somewhere around the 5k USD mark), and for the latter just regular checks on every oil change and change it when it does fail for not that much. Otherwise I haven't heard of anything else specific to either the E46 in general or the E46 M3. Just about every performance German car has it's own similar foibles, but they're not horribly, ruinously expensive if you just take good care of em with timely services, good fluids and a bit of preventative maintenance where applicable.

Also helps if you're handy with a computer on modern cars, so you can really take advantage of the on-board diagnostics.

Bit baffled why you wouldn't just take the rear bench out if you're gonna run a half cage.