Despite its relatively small physical size, Hong Kong is a place where car culture thrives.

If you visit you will always see a few interesting cars on the streets, but for the most part, the real scene is underground. Because just like in Singapore and Malaysia, the authorities definitely don’t make it easy to be an enthusiast here.

Before starting, we should explain how things work in Hong Kong when it comes to modifying cars, because the rules and regulations aren’t all that clear cut. You can usually get away with fitting aftermarket wheels, coilover suspension and an exhaust, but if the police don’t like what they see when you’re pulled over or caught at a checkpoint, your car will be impounded for at least three or four days. Then it needs to be checked over at a government inspection agency, and all modifications deemed illegal need to be removed before the car can legally go back on the road. In short, this means you can forget about major upgrades like engine swaps. If the authorities want to keep your car for an extended period of time for whatever reason, that’s at their discretion too.

So, owning a modified car in Hong Kong is risky business. But that doesn’t stop people.

A few years ago there was a big underground meet held at the Ocean Terminal shopping center car park building right in the heart of Hong Kong. It was organised through social networks and messaging and had a huge turnout of machinery, from collector classics to modified Euros and Japanese performance cars. Unsurprisingly, with traffic jams all around the venue, the unofficial event caught the eye of the police who promptly shut it down. As you can imagine, this wasn’t the best scenario for anyone who had driven their illegally modified car there…

As time has gone on, more of these underground-type meets have been run in Hong Kong, but the organisers always try to keep the location a secret until the very last moment to at least try and limit attention from the authorities.

Last month I was in Hong Kong to do some tuning, and luckily it timed with a local car show called Step4Stance (S4S) Auto Party.

During the week the weather was really bad; it was hot and humid, and heavy downpours of rain meant that lots of areas were flooded. A cyclone was predicted for the weekend, but thankfully it stayed away and on Sunday morning there was blue sky.

The venue was Tai Tong Organic EcoPark in Yuen Long, which is around 30km (18.5mi) out of the city center. If you live in Hong Kong or have visited before you’ll know just how premium open car park space is, and therefore how limited car show organisers are when it comes to finding a suitable location to hold an event like this. Being away from the city and therefore not in the eye of the police was one of the reasons this place was chosen though, so I don’t think anyone who brought their car along – either by risking driving it or on the back of a transporter – would have been complaining.

Stepping out of a cool air-conditioned car, the 40°C (104°F) temp hit me straight away. There was no shade at this place and I forgot to bring some sunblock along, so I had to do the rounds quickly.

As you can see, there was a wide variety of cars and build styles on show, but like the show’s name suggests, stance is the main focus of the S4S Auto Party.

I had a quick chat to the organiser, Cyclone Lai, and he had a few things to say about his even at the Hong Kong scene in general. “Our goal with this event is to showcase stance culture and the show car scene, so the locals know more about it and hopefully join in. This is the 5th year of running Step4Stance, and the numbers of car entries keeps getting higher. It might not be as big as other similar meets around the world, but here in Hong Kong we are now starting to get a good mix of different cars show up. In the past few years there have definitely been more stance style, custom wide-body and air-bagged cars roaming around our little city and we will continue to host these events so the scene can grow to an international level.”

With so much of Hong Kong’s car culture hidden away, it was cool to attend this show and see how the local scene is evolving. The JDM and USDM inspiration was evident, but some HKDM style shone through too. Hopefully we can see more of that in the future.

Full Speed Ahead At FittedUK

What notes? I don't see anything that different.

There should be at least a track for people to learn how to properly drive fast in HK. HK is just way too small and crowded to have fun driving around.

I thought they go to mainland China for that, like Singaporeans did go to Malaysia to go to Sepang when they wanted to do some track days.

It's probably not as common as Singapore. We need some paperwork and temporary permit to drive the car to mainland china, also we have RHD cars in HK while cars in mainland China are LHD. Also the cost is pretty high from what I've heard (close to 1500 USD for the whole weekend), so it's usually supercar owners doing it.

It's quite surprising to see a report on HK car culture here on SH. I thought modification was full legal there, since here in mainland China, most road legal JDM machines are registered in HK plate, and you see them everywhere on public road in HK. It's the first time I learned that they have a strict law on it.

The culture of car modification in mainland China was bred and spread from HK, even the way how police treat those modified machines remains the same. Thanks to internet this trend is getting more popular, even though classic JDM machines are rarer than panda here, Chinese can still have fun with limited choices. Hopefully you can visit mainland and have it covered one day.

OMG. I want a panda so bad.
Why did you have to say panda???

Hi,
Due to the car parts factories are located in china, Mainland China's modification trend is following the world trend very tight. Mainland people have bigger space and more capital to build thousands of project cars every month. Here is already a high standard carshow coming. Check it out ! 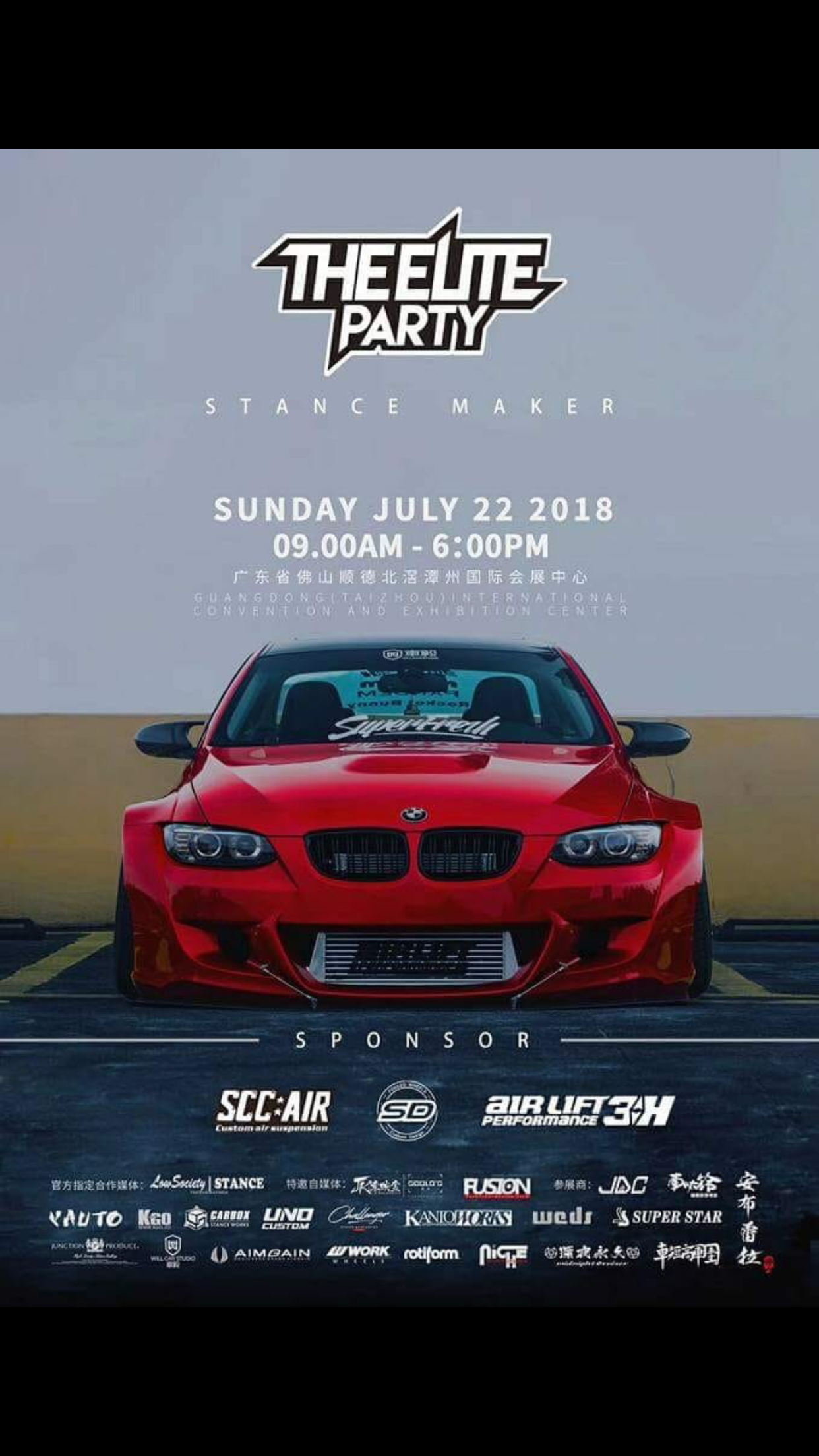 Well it's my luck that I happened to be in Shunde that day. For sure I'm not gonna miss this. Maaaany thanks mate.

what a very cool name....cyclone

Car culture in Hong Kong is quite passionate but difficult, not just because of legal issues.

In Hong Kong, those who are interested in automobile and/or motor racing stuffs are very few-even fewer for around/below 20s. Of course get a car for your own is never easy, and the stereotype of car owners=rich people just can't be changed suddenly.
Also, a single bit of changing livery can get yourself trouble-years ago I saw a magazine with the owner borrowed a Calsonic-livery R31 for photos and interview, but he said he have to revert into the plain blue soon afterwards. It's next to impossible to see Itasha or unique liveries on road or exhibit, while most cars on road are white, silver, black or grey.
Finally, most news about car tuning must be related to "illegal racing" on highways with police arrests-which I think the cause was because Hong Kong never had a proper circuit or alike besides the Formula E race in Central. It's not hurt to get a official and proper place to drive to the limit, right? But the officials are just effortless on activities...and they have no idea Victoria Park had a go-kart championship around 20 years ago yet ended because of noise complaints from residents around.

Too much obstacles for us...

There might be a chance in the future when you can drive to Zhuhai and have a race there, at least there are active track days and living car culture as well. But what's really bothering is that you cannot just drive through the bridge and cross the border, unless your plate is registered in bridge pass, which is making that mega bridge quite useless. Those who are rich enough to afford mainland black plate wouldn't have such worry tho.

Those trackday enthusiasts always registered the temporary permits to ZIC or GIC, the HK racing culture is already moved to china. Because too much speeding cameras on roads recently. Also every car got a cam recorder now, people love to report the naughty drivers....

bB Squad!! Still love my first gen xB even though it is literally the slowest car Ive ever owned. Its got presence!

YASSSSS! my fam is from HK and i knew it was strict there. still, i love that car culture cannot be stopped!

i'll be in HK in Dec. hope to do a little speedhunting while i'm there. my aunt lives in Bel-Air and they have a TON of fancy exotics in the area but i'm more interested in these types of cars. exotics are ok but i want to see HK car personalities shine! great article

Yawn, I thought Asian people were supposed to be smarter.

I keep forgetting that most of these Far Eastern cities have absolutely Godawful summer heat and humidity.

Studied abroad at CityU this past spring and always saw some cool modified cars parked around mongkok, bummed out that I wasn't able to explore and see more of the car culture that this island offered. Thank you Jacky for covering this event and providing more insight on what Hong Kong car culture is like!

god i really wanna know what that graffiti'd out kei van is. i think it's a Suzuki Every Plus after doing a bit of research. it's sick as hell

Does anyone know of any up-coming events in HKG during September/October? I'll be visiting for 20 days.