Warning: things are about to get overly nostalgic here…

1996 was the year that Mazda killed off the Cosmo, almost 30 years after the model put the little automaker from Hiroshima on the map. It was a a decent stretch which saw the car go through four generations, all the time keeping that coupe feel about itself, and of course the Wankel engine up front.

In fact, the Cosmo was the rotary car for Mazda; it was used in all iterations from the 10A for the L10A/L10B, onto the 12A and 13B for the CD and HB series of the car, and of course the later evolution of the 13B along with the big daddy 20B for the final JC variant. It makes it one of the most special 2-door coupes to come out of Japan, and seeing this HB at 7’s Day celebrations over the weekend sparked even more interest for me.

The JC Cosmo is a car that we’ve seen a bit of at meets and gatherings but the HB is quite the rarity. I was really blown away by the visual impact this particular car had, the spotless condition, that red paint and those BBS rims.

This car wouldn’t be half as special if it didn’t have pop-up headlights, which at the press of a button completely transform the front-end look.

It’s an interestingly styled car, in fact that’s something you can say about all of the Cosmos, but the HB especially was a bit of a bridge between the old school look and feel of the ’70s CD and the rounder more modern feel the the JC had. It’s therefore got a mix of angular lines and odd curves here and there.

Like how the rear side glass seems to swoop around and merge without a pillar into the rear glass. It creates an awkward rear quarter panel that’s both weird and wonderful at the same time.

The back, however, lacks the quirkiness of the rest of the car; it’s almost something you would expect to see on a vehicle of this vintage and more Mazda Luce – the four-door variant of the model built on the same platform – than Cosmo.

The interior couldn’t be more ’80s if it tried, and like the Cosmo that followed there was a subtle feel of refined sportiness mixed with a nice array of tech-based gadgetry. I like the way the shifter sprouts out from the steeply-raked lower portion of the center stack, and how there is an organized array of buttons on each side of the dash to control pretty much everything. This means the center console was refreshingly clean and simple.

Like so many other Japanese cars of this era, the dash was a nice mix of analogue and digital, and there was also a easy-to-read boost gauge to keep an eye on what the 12A turbo up front was doing.

Headlights up or down? I like it both ways!

The 12A motor in the HB didn’t come with an intercooler but the owner of this particular car added a little one in the lower portion of the bumper to help make the whole setup a little more efficient.

That’s not the only upgrade either; can you spot the vintage performance upgrade?

This finned HKS intake pipe replaces the stock red turbo pipe and was designed to promote extra flow and help reduce heat. Now there’s an intercooler to take care of the latter, but this is one awesomely rare addition. I’d be interested to know if any of you guys have ever seen one of these out in the wild?

So here comes a bit of wishful thinking. If Mazda is really working on a 16X-powered RX-7 replacement, wouldn’t it be cool if it came up with a reinterpretation of the Cosmo as well? Maybe stretch the 16X to three rotors, call it a a 24X and keep the rotary dream alive.

I now know where General Motors got the inspiration for the 1989 Olds Cutlass Supreme. Beautiful car and great story Dino.

Speedhunters, y u do this to me?!

I've been looking at Cosmos on Car Sensor since Saturday. Dangerous stuff this car thing...

My buddy has a 20B cosmo. They’re pretty interesting. They make crazy sounds and are quite luxurious.

Does he have the optional TV screen with all the digital interfaces?

I don’t remember about the tv, but all the gauges are digital. It’s pretty cool

What gauges are those??

I was so sure that the Mazda RX 9 concept was going to be a new Cosmo when the teaser silhouettes started getting released. It coincided with the 50 year anniversary, and to my eye shared way more design language with the Cosmo line than the RX line. I'd love to see it come back also.

I saw the first pic and thought this car is not for me,but on seeing the the BBS rims that brought the car to life,I could drive it no problem,to me it now has presence with the rims.....and rims to me mean everything.

This beautiful car need to be featured in racing games.

Ive had two of these cars, and I am so sad I dont have any of them left

Here is a pic of the older one rescuing the newer one... 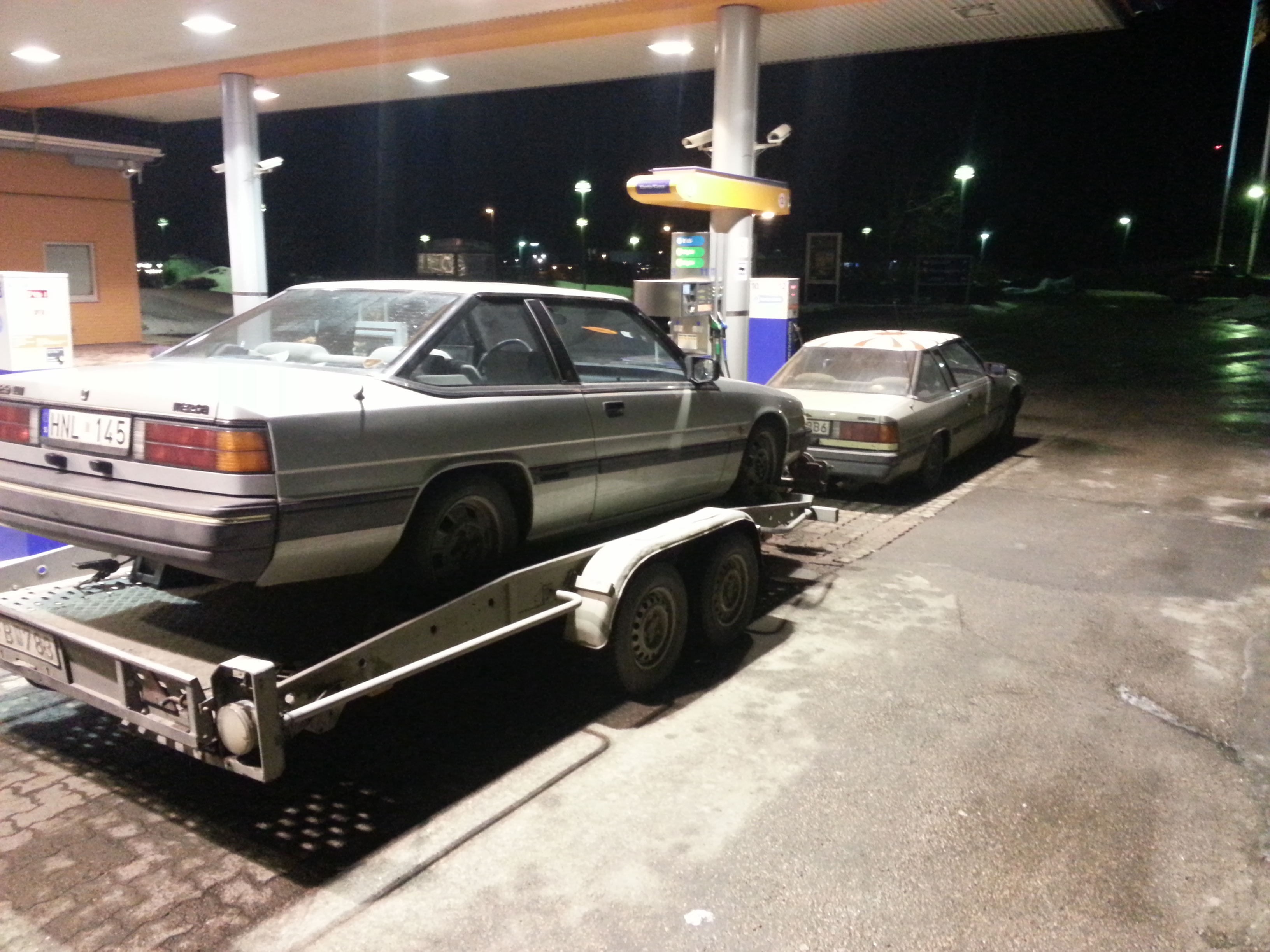 Two things that I regret in life. That my father and I did not buy a rusty AE72 from a friend. And that we sold both Mazda 929 coupe, yes, we had three of them, two on the go and one for spare parts. The first was blue, with a blue interior), and the second one was gray with a brown interior and an additional small window on the sides for the rear passengers. But then I was a youth, my head was empty)) I hope I can find the photos.

Interesting how the HB has a Rotary Turbo badge on the grille from a HC3S Luce.

One of my dream cars! I'll own one some day

Good god! That dash looks like a bloody Walkman!
That's TOO retro for me, I'll stick to my pair of rotary switches under a pair of bobble vents