SHARE How Does The Toyota JZ Make You Feel?

The Toyota JZ makes my ears hurt, for one. But more on that in a second because I want to take a brief look at the history of these particular motors.

While I really only think of the JZA70 and JZA80 Supras when it comes to the 1JZ and 2JZ turbo motors, these powerplants came in a variety of chassis, including performance variants of the Chaser, Soarer, and Aristo amongst others.

The JZ is a totally capable straight-six that we’ve seen used from drifting to endurance racing, and with just a few mods makes for a proper street car. I’ve actually almost bought one on a couple occasions for a swap, but I just haven’t been brave enough to pull the trigger.

When I came across this handful of 4th-gen Supras at Motovicity’s Never Lift Half Mile event it got me thinking again. It was a good reminder of what a great engine the turbo 2JZ and its smaller 1JZ counterpart really are. But I’m getting a bit distracted, because after the event I left with a distinct impression on how the JZ made me feel.

Shortly after I took the cover photo for this article, another JZA80 rolled up to the party at the edge of the airstrip at the New Coalinga Municipal Airport.

As the Toyota was cruising by I thought it a good time to invite Nick Stonawski to absolutely assault my senses with his L-Spec-built ’94.

After rupturing my ear drums, Nick continued on his way to join the big-booty ensemble.

Probably the most mental Supra of the weekend, though, was Joe Recinos’ 1995 model shown at the R1 Concepts booth during the event.

It was a car that got plenty of attention and rightly so; it’s a gorgeous setup, a show car that’s ready to rock.

If this isn’t indication of that, I don’t know what would be.

I thought Joe’s speed would have been good for the fastest Supra of the weekend, but the results show that Tho Nguyen’s ’94 — which was also parked up at the R1 Concepts booth — made it to 186.57mph (300km/h).

Equally good to look at under the hood or at speed, the JZA80 Supra is one of those timeless cars that will never go out of style.

Likewise, turbo JZ power itself will never die, and the time I spent with these cars only rekindled my interest in the platform.

The long straight-six won’t fit under the hood of everything, but the potential there is just so great.

With minor bolt-ons you’ll find yourself at over 160mph in the half mile — as was shown from a number of white Supras at Never Lift — and there’s so much more to be found in these motors from there. The application potential is there too; I really want to stick one of these where it doesn’t belong, but doing so takes serious commitment.

Of course, if you haven’t already pointed out in the comments below that one of these is not a Supra, you will have at least noticed this fact immediately.

Kyle’s 2JZ-powered Toyota 86 was built by his friends over at GoWraps, and I have to say the final result is stunning. I learned that the car is stored just a few miles down the freeway from my house, so pipe up in the comments if you’d like me to take a closer look at the car.

But for now let’s have a moment of appreciation for the turbo JZ-series motors. The 1JZ and 2JZ brought us over a decade of high-horsepower Japanese reliability in a straight-six package that was far ahead of its time.

If you could drop one in anything, what would it be? 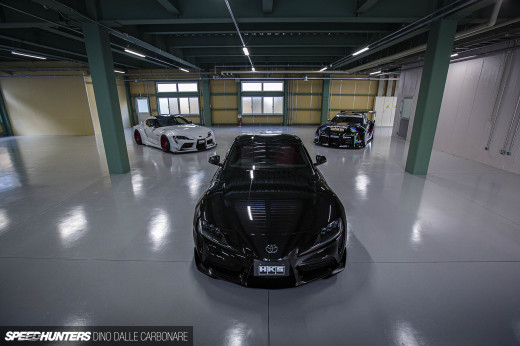 LOOK INTO THAT FREAKING 86!

I'd buy one in a heartbeat, but they're all auto in the UK

There are plenty of good auto gearboxes, choose and install one. But, ofc, it's not for drifting at all, although I know some crazy drivers, who use sequantial gearbox for drifting in my city. I'd like to buy IS300 and make a change on sequential gearbox for cruising. This is my of many goals)

I have actually seen a 2Jz swapped into a Foxbody Mustang and it was glorious.

I've got a bone stock VVT-I obviously NA 2J in my M/T IS300 and that thing is more fun than I thought it'd be. The torque curve just feels right having spent a fair amount of time on curvy backroads along with 1/3 mile speedway drifting on occasion. Don't overlook these too hard

Just curious, is the half mile relatively new? Its weird to see that integra and civic run faster than a lot of the cars there. Were most of these just street cars or 1/4 mile cars not built specifically for the 1/2 mile? I've been out of the scene for a long time but I assume it wouldn't be too hard to get a supra to break into the 200mph.

I love JZs, but for real life purpose, I would prefer much lighter AZ/AR or ZZ/ZR series, despite they might cost more to run & didn't yield similar performance...

28 years, actually. It truly is one of our generations wonders, that engine. Mine never fails to make me smile.

You obviously need not to Hunt the 86 down. Just get there and shoot it.

I have a sense there's an interesting story being the 86 - 2JZ marriage.

I don’t really feel anything for them, I don’t know anyone who has or had one so I have no first hand experience with them. Would anyone like to give me a ride?

Anyone else here have head gasket issues with their 2JZGTE or the NA 2JZGE? My bone stock fairly low mileage Non-VVTI GTE swapped s13 blew its head gasket after only a few months of driving. Also a friends MKIV Supra with a fully built 2J now has a small fracture in its head gasket and runs hot. Is this just our bad luck with 2J's or anyone else ran into the same problem?

Where are you located? check the cooling system, these engines are well known to overheat specially on stock turbos. First thing we do here (Middle east) is swapping to a single turbo and fit separate coolers, the most simple and effective "stage 1" upgrade sometimes even before dropping it in the new chassis.

I live in the south-eastern US. The cooling system was completely replaced with OEM Toyota parts before I put it into my s13. I replaced the water pump, thermostat, O-rings, and new radiator & hoses. The cooling system was even pressure bled to ensure there was no air trapped in the system. The original head gasket was still on the engine when installed so that's my fault for not replacing it. I still love 2J's even though my luck with mine wasn't so good.

Huh. I never saw an 86 and a Supra side-by-side. I would have sworn the 86 was much smaller than the Supra.

Matt this is so true also would have thought it would be tiny in comparison...interesting indeed.

A long overdue article on Supra... well the heart of the supra but nonetheless. I love supras! 2jzgte & 1jzgte greatest straight 6s ever.

Dear Mr. Trevor,
I would like to see a separate full detailed article dedicated to that 86 (considering starting the same build :D).
Thank you in advance.

In a Toyota Cressida

even though I love the 5M in my Supra (it sounds awesome with all the pops etc) I really want to put a jz in there, if only labor wasn't so expensive for a swap.

Yeah yet again Trevor you made me make a mess in my pants. still my all time numero uno dream car....and liek i stated in the other post my sa22c with my 1jz would have been fun times.

It may seem cliched, but I've got dreams to put one in a Rocket Bunny BRZ

The Mk IV Supra will never not be beautiful. The 2JZ is also up there with one of the best sounding motors of all time. With the prices of all the Supras going up I'll never be able to afford one but I'll always lust after them. They are so damn beautiful.

Awesome article as always Trevor!! If I could, a fully built 2JZ into a classic American Muscle, may a 68' Mustang or 69' Camaro. The internet would go crazy!!

I would put a 1J in my Civic with a RWD and a getrag tranny. Hey, he said anything didn't he?

Would like to see more of the 2JZ powered Toyota 86

I have mad respect for the JZ series simply because of how easily tune-able they are. As an MKIII owner myself, of course I favor the 7M solely out of jealousy and spite. But a little sibling rivalry never hurt.

Thanks for the shout out guys! We got a few more L-Spec cars that will be there at next half mile look out for our M5 and G37 next event!

2jz with billet aluminium block in a ferrari 355 with cf body. Porsche pdk transaxle of somesuch

St205 gt4. They're the older yet smaller brother of the Supra to me anyway. That horsepower, smaller all wheel drive car...I would live in it.