You know that one car that you own that you just can’t part with? It’s not the best car you own, not the greatest looking, not the most powerful, and it’s certainly not the most reliable.

Despite this, it’s still the car the brings the biggest smile to your face when you make time to drive it. The more time and hard work you put into it, the more satisfaction it brings when you turn the key in the ignition and the motor breathes to life. This is your car, and you understand each other.

I knew the three original body styles offered in Japan (as the Bluebird) were the same three offered in the US (as the 510), but until coming across this particular car I wasn’t personally familiar with too many details beyond that.

When these cars were new in the ’60s, the best Bluebird that money could buy was the super-hot high compression 1.6L SSS, good for 99hp. This setup was bested by the 1800 SSS in 1971 and only produced for one year, after which it was replaced with what we know as the 610. Thus, the 1971 1800SSS coupe is a special car in its own right.

To Sergio — who spent the entire morning wrenching on projects, washing cars, and driving his E-Type race car and 510 out for me — this car is even more special. The story of why this 510 is important to him actually starts with a ’65 VW Bug that he bought for $500 as a teenager in the ’90s.

After a week of restoration projects that totalled around $50 and a few weeks of advertising and showing the car, he was able to sell it for more than five times the original purchase price.

Sergio tells me that at the time a handful of skaters in the Bay Area were driving 510s, so he began to take interest in the chassis with the VW money burning a hole in his pocket. The tipping point was when one of his buddies purchased “the ultimate 510 from the ultimate 510 builder, Troy Ermish.” It had the whole nine yards – an FJ20 with Mikuni carbs, light tan leather seats, 5-speed, all the right mods, and Bluebird badging.

Finally, Sergio found one of his own, sold the parts it came with, wrenched on it and traded up to a proper, fully caged 510. Eventually he sold this one as well, and after flipping several more he moved to snow country to “become a snowboard bum.”

But the better part of a decade ago, Sergio really got the itch again for a good old fashioned 510. When he came across this example built by RH Factory in Japan with help from Kamaeri Racing, Sergio knew it was the one. He’s gone through plenty of Datsuns in his time, but this one is the keeper.

Correct me if I’m wrong, but as far as I know there are no more than five 1800SSS chassis in the United States, and this is the only one plated and registered, driving legally on the street.

I know I said I’d try and stay away from this area of the Alameda Naval Air Station, but time was running tight and the light was just right. I caved.

There is no mistaking the fact that it’s a bit of a cheater location, so you’ll have to bear with me, the San Francisco skyline, and a beautiful sunset. I hope you can manage.

One of the things that makes this particular 510 so great to me are all the old school racing style and factory decals that adorn the vintage body.

I’m a bit fuzzy on the specific history of this chassis, but it did see track time in Japan before making the trip across the Pacific to end up in Sergio’s hands.

Along the rear quarters of the car, ‘Butasan’ is proudly displayed. This directly translates to ‘Mr. Pig’ after the ’80s Japanese arcade game where you control a pig and throw bombs at other pigs. Makes sense.

Sergio’s thought of pulling the decals and restoring the car, but out of respect for the build he hasn’t found it in his heart to change anything just yet.

The same holds true on the inside of the Bluebird where you’ll find a couple untucked wires and the console likes to to pop out of place.

But it doesn’t matter, because check out that emblem.

Bride seats and Sabelt harnesses now keep the driver and passenger in place in the small coupe.

Sergio wanted to clean up the inside a bit before the shoot, but I asked him not to. This is a car that has more than a history; it has a future. It’s a rare bird that’s still enjoyed, and that’s the best part of this car to me.

When you pop the hood, this is where you notice Kameari’s touch on the build. The 1.8L makes use of Kameari street pistons, their 78-degree camshaft, along with their upgraded 46/36 valve assembly. This includes the Kameari race-spec valve guides, making the 1.8L a high-revving and dependable affair.

It obviously isn’t massively powerful, but in a car this size it just doesn’t need to be. The intake sound alone is enough to give any driver behind the wheel a sense of speed.

A Refresh 60 stainless exhaust header sends spent fumes back into a one-off stainless pipe that exits in the rear.

A 71B transmission from a later Datsun has been swapped in which easily handles the bump in torque and peak power from the wound-up 1.8L.

Power is delivered to the Work Equip 03 wheels through an R180 limited slip differential, while a Wilwood brake setup ensures the driver maintains control at speed.

With the Cusco coilovers, Mr. Pig handles the power to the wheels in such an analog way. Despite wanting to step out here and there, everything is communicated through the chassis to the driver, resulting in a car that feels like it’s on rails as it rips on the backroads.

Just looking at the Bluebird and experiencing it firsthand, it’s clear that Sergio no longer needs to look up to his friend’s amazing build from the ’90s that got him hooked.

Sergio now owns the ultimate 510 and it’s a car he drives more than any of his others. It’s the one that brings him indescribable satisfaction each time he’s behind the wheel.

The one that will never, ever get away. 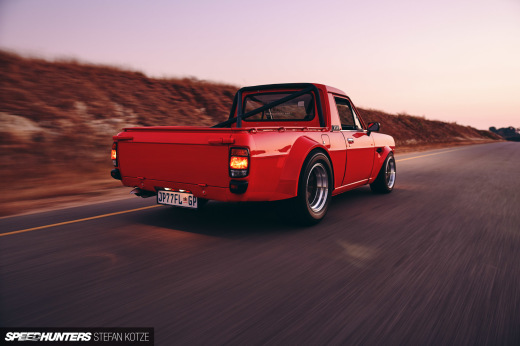 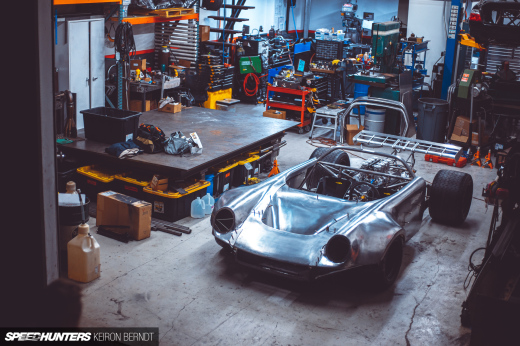 Burn Your Rulebook: Meet The Half11

Any soundclip for this? Would like to have short videos of all cars featured here on SH. Cheers guys and keep up the good work.

any vids of this famous intake noise? love to see onboard footage

Looks like a blast. As far as it being the only road legal model in the states; is it one of the rarer cars you've been able to shoot?

Heel and toe looks very difficult with those pedals. Spacing is very far! I race a Datsun with John Morton. I think he would like this car!

As I say this, maybe a car you’ve already sold comes to mind. The one that got away, that you should have just figured out how to store for a couple months

You're gonna make a grown man cry, Trevor. I had a Proton Satria GTi, nothing special to most of you stateside, but it was Malaysia's Halo car from the 90's into the 2000's. basically a rebadged Mitsubishi Colt GTi. Matt and Dino will know it im sure. She was GSR-T swapped, with an evo 3 front end grafted on, and put down 320 FWHP. Overboosted and dropped a valve. basically fucked the whoooole engine. she was built too. I just hadn't got the funds together to build the head at that time. Ended up parting her out and through changing phones several times, lost touch with the owner of the bodyshell... Maybe one day ill find her and get her back again. Sorry for the long ramble, but you pulled on my heartstrings there.

Amazing article, and a gorgeous car. A real slice of proper JDMity <3

I knew the three original body styles offered in Japan (as the Bluebird) were the same three offered in the US (as the 510),

Don't believe that the "coupe" body style was sold in the states, we did get a "two door hardtop". The C-pillar has a different
slope to it.

correct, if im not wrong, USA didn't have the option to purchase any bluebird option... nor the 1800SSS

This is what the 2 door sedan looks like, in the original BRE trim (which is, ironically, an American team's racing livery) -- which this one is mimicking: 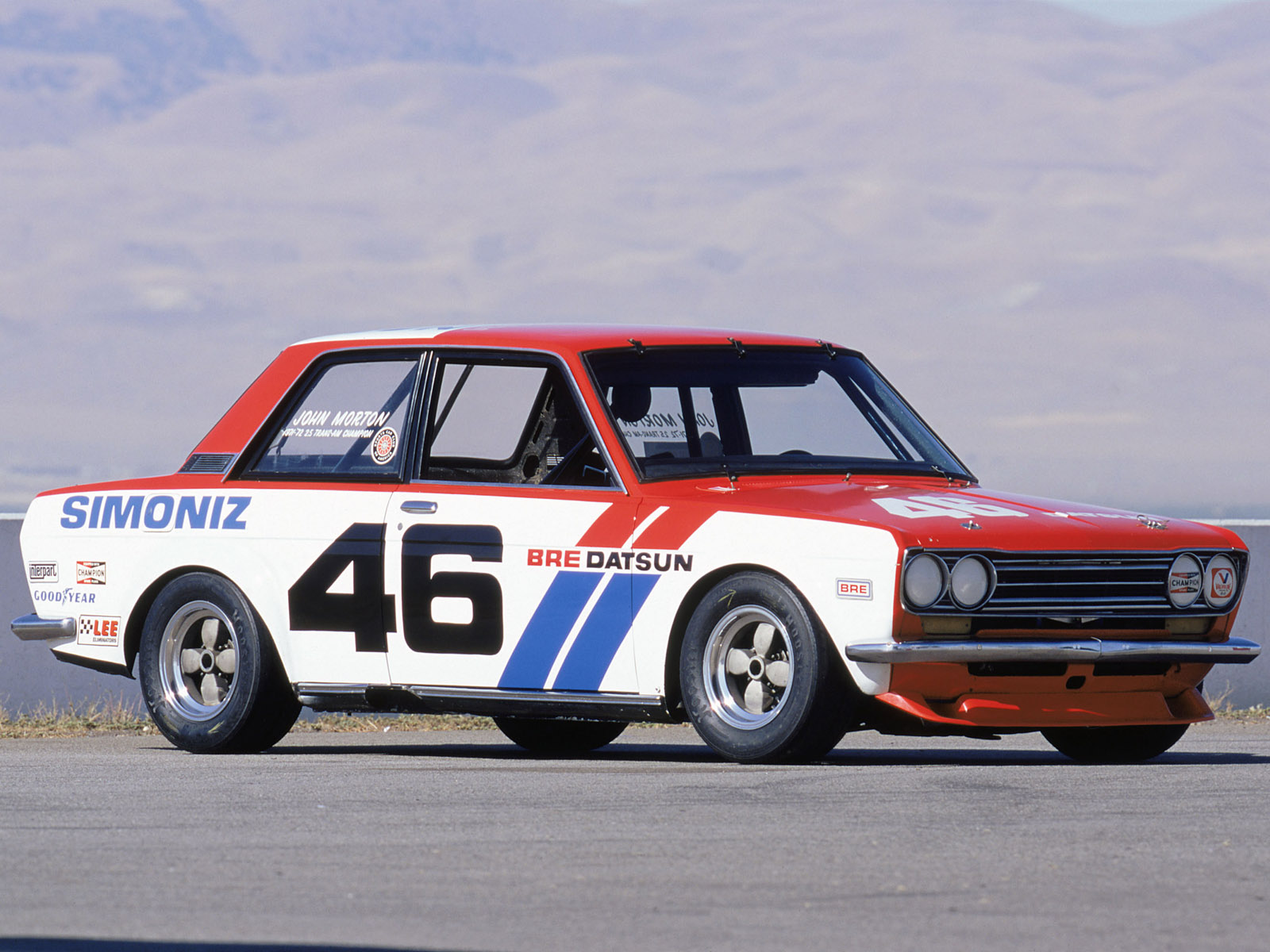 Correct. The coupe and the 2-door sedan are different. There are actually 4 styles of the PL510 (which is the chassis code).
4 door sedan
2 door sedan
wagon
coupe (like the one in this article).

Fun fact: the 2 door sedan actually PREDATES the coupe by a year or two. When the Bluebird was brought to the states in '68 (technically late '67), Mr. Katayama -- president of Nissan USA (called Datsun at the time) -- decided that the US market would need a "sportier" version of the Bluebird in order to soak up as much of the market as possible (and to push his belief that racing was the way forward for Japanese cars in America).

He got his way, and the 2 door was made and sold starting in '68, but was never available in any Japanese, European, or Australian market. Two years later (one year later? model years are weird) the coupe was made for Japan as a "Deluxe" offering of the Bluebird, then was subsequently sold in other markets. But not the
US, as we already had the 2 door sedan.

The key difference is that C pillar, which is has both a shallower angle than a 2-door 510 and is wider (this also creates a different quarter window shape, hence replacing those quarter windows in the US is very difficult).

Correction, the 2-door sedan wasn't available in Australia, but very few (fewer than the coupes) remain in Japan.

It's an ugly car from one end to the other, I hope it makes the owner happy though.

DAAYYYYMMMMMMMMMM!!!!!!!!!!!!! What a view! Both the subject and that backdrop! Crazy cool build! Nicely put together Sergio!

I love the wood paneling and the floor mats, you have a sick style bro!

In the words of the Street Fighter arcade game...-"PERFECT."

Very nice build dude! The SH team should come to South Africa if the readers would appreciate seeing an abundance of neat 510's.

Dream car no 5. With this new tv show coming out JDM classics are gonna be hard to find even more. JDM Legends

When you mentioned "Despite this, it’s still the car the brings the biggest smile to your face when you make time to drive it. The more time and hard work you put into it, the more satisfaction it brings when you turn the key in the ignition and the motor breathes to life. This is your car, and you understand each other.

As I say this, maybe a car you’ve already sold comes to mind. The one that got away, that you should have just figured out how to store for a couple months, that you should have just spent a little more time with. You wonder where it is now and who, if anyone, is behind the wheel." I almost cry, I recently sold my 73' 510SSS and trust me, thats something I'll regret the rest of my life

In case you read this, it would be nice, veryyyy nice, if these type of reviews had at least one video...