“What are you doing after you graduate?”, “What do you want to do when you grow up?”, ‘What school are you going to next year?”

Chances are that we’ve all had these questions aimed at us, and many of us didn’t really have an answer. Loren was one of the lucky few that had the answers to those frustrating questions, and to him it was simple – keep creating videos.

For Loren, video started at an early. Thanks to his father’s passion for film and cinema, Loren spent many of his early days re-editing snowboard and BMX videos to different music with Windows Movie Maker.

It wasn’t until 2010 that Loren started to take his hobby seriously after he shot ‘Drift in the PARC‘. The amount of positive feedback and support gave him the courage to go all in for a career in video, and by 2012 he was covering Formula Drift full time for Justin Pawlak and Falken Tire.

Loren now spends close to 50% of his year traveling, and last year he spent 155 days away from home shooting everything from Formula Drift, Frenemies, Gentlemen Drivers, and the Gumball Rally.

While all the traveling results in a lot of air miles and tier points, it subsequently meant he wouldn’t have as much time to work on his project cars. In turn, this means that while Loren’s S14 isn’t perfect, it’s being built with an end goal in mind.

It was from watching Walker Wilkerson and Justin Shreeve compete with slammed that cars gave Loren the push that he needed to build his own.

With the taste of tire smoke still in his mouth, Loren set about drifting his 1984 BMW 530i, but before he could learn, a friend offered a straight trade for his S14 – a deal Loren couldn’t refuse.

Aside from the near endless customization options, and being a proven drift chassis, the S14 offered Loren the chance to follow in Wilkerson’s and Shreeve’s footsteps with a stanced drift car.

When he took ownership of the car, it was green but was quickly wrapped white. However, that only lasted until Loren realized how easily a white car gets dirty, and especially a white drift car. With the white removed, Loren next went for a red wrap as he’d always wanted a red S14.

Along with the colour change, Loren went with a mixed zenki/kouki  front end. The fenders and bumper are zenki (early, pre-facelift), the VIS carbon hood and headlights are kouki (facelifted) due to Loren being able to snag the parts off a wrecked S14. The mix and match theme continues with Vertex bumpers (front & rear) and sideskirts, paired with Origin +20mm front zenki fenders and +50mm rears.

With a couple more minor adjustments and tweaks, along and a fresh wrap, Loren will be happy with his version of the kit.

With a full cage built by Magic Garage, who are also responsible for the front lower control arms, Loren’s car isn’t built for practicality on the streets, but more about safety when on track. Even if there might be luggage issues along the way…

The LRB Speed rear seat delete and cage flow well with the feel of the interior, and are coloured matched to the exterior.

A set of Bride Vios 3 Seats and Takata harnesses suit the car well, and ensure that this S14 can be tracked at almost any time.

The Kenwood 6.2″ Double Din head-unit is equipped with a backup camera, that I’m sure allows Loren to see how close he can get on wall runs.

Hidden from view are the climate controls which Loren relocated into the center console. While I’d never thought of it before, I must admit that I think it really cleans up the look of the interior.

Everyone likes to add their own personal touch when it comes to their car, even if it’s as simple as their choice of air freshener or even the complete lack thereof. For Loren, it’s his steering wheel.

The wheel was made and engraved by Grip Royal, and features Leopard print styling along with Loren’s trade name ‘LoreninHD’.

I’m no magpie, but these wheels certainly caught my eye the moment I first saw the car. A set of Weds Kranze Bazreia’s, wrapped in Falken 512s ,sit on all four corners and do they ever suit the car.

Driving a lowered car isn’t for everyone, nor is the fact that you are literally sitting on the ground. While this may be an inconvenience at times, Loren enjoys it, and that’s what matters.

An added bonus is the looks from people who can’t wrap their head’s around how something this low, and with such aggressive wheel fitment, is even drivable in the first place. Loren gets by with Power by Max competition coilovers, matched to the same company’s front tension rods, rear lower control arms and rear upper traction rods.

There’s also Sheckwelds street angle steering knuckles. For some of us, there’s a fine balance between form and function when it comes to building our own cars, for others, they find a way to incorporate both. In the case of Loren’s S14, Loren was able to find a balance between something capable of drifting and something that looked good.

With a little more free time at home this year, Loren hopes to replace the stock KA under the hood with an SR20, and finally get some runs in at his local track.

While we don’t always have the answers to many of life’s questions, it never hurts to follow your passion. Who knows, maybe you end up doing something you love, getting paid, and seeing the world in the process.

Before I wrap this up, I’d like to extend a huge thank you to Mark “Sparky”, Loren’s dad for spoiling me rotten with one of the best chase cars I have used to date. 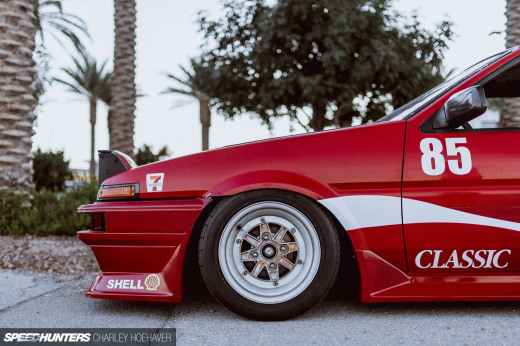 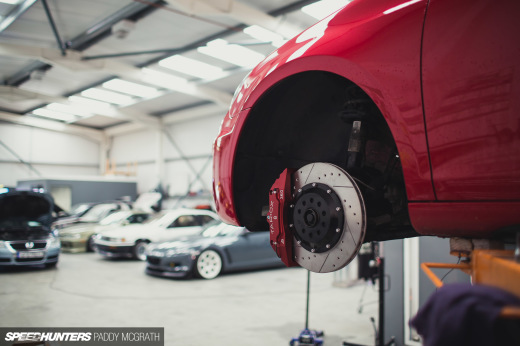 Agreed, especially with the wide fenders.

The zenki corner lights with the kouki headlights are surprisingly good together.

Despite the fact that I couldn't in a thousand years get the car onto or off my street, I have a serious soft spot for the 'no fucks given' approach to the styling on this.

Bro I love that steering wheel, its so cool!

I really want to know more about the setup on the mini though!

The set up on the mini is a 2003 Cooper S with a supercharger and on top of that an inner cooler. We went with a better ignition system link ECU that is totally programmable. Reduction pully at 17% Borla exhaust starting with headers at the block all the way out to a double exhaust tip. Full competition suspension ported improved brakes and finally a large rear sway bar to go along with the shock tower sway bar in front. Tuning was done by PS I in Portland Oregon. On the Dino we got 179 at the wheel and around 200 hp at the crank shaft.

I'm sure we can sort something out...

I see you with the Shred Bots sticker. Just the icing on the cake for an awesome build lol.

Id literally kill for that beuty

this is a joke right? speedhunters sure is scraping the bottom of the barrel with this wanna-be drifter boi who blew all his money on wheels “build”. error 420: style not found

really want to know more about the setup on the mini , awesome s chassis

Relocating the climate controls to the center console might seem like an inconvenience, but for styling purposes it seems genius if you want a smooth dashboard. Also I like the zenki corner lights with kouki headlights. They are mismatched, but they seemed to flow very well. Dig it a lot.

Portland? Looks familiar...if so, I hope that he brings it to RDM sometime!

yeah thats portland, id love to see it at RDM too, I haven't been in forever though hahah! need to go again

"Loren went with a mixed zenki/kouki front end. The fenders and bumper are zenki (early, pre-facelift), the VIS carbon hood and headlights are kouki (facelifted) due to..."

NOW I SEE IT

This is the first IAMTHESPEEDHUNTER where the pictures are for me on 2nd place. The Story behind the car makes this feature interesting for me. Great guy hope we will see him soon again.

I must say that it is real fun watching slammed machines drifting around.
There's something about that panel gap at the front fenders that I really like for some reason.

That's quite cool to see. I saw the spelling of the name and thought "it's gotta be LoreninHD" He got me sparked me getting back into media a couple of years ago, I would always film my friends skating and drifting and loved to chop up clips and make a video to it. Then I stumbled across that PARC video on Vimeo after getting out of filming for a number of years when I was 16. Not trying to fan out, but it was pretty cool seeing someone from behind the lens

Repping Portland! so much love from one s14 owner to another!

This car is my spirit animal.
Looking forward to the end of winter so I can take out my shitbox of an e36 back on german roads.

I LOVE this car! I'm rockin' a Kouki S14 front bumper on my Zenki and with some massaging, it looks SOOO good! I love the "Slight Adjustments for maximum effect" approach taken on this car!! More and more and MOAR of these types of builds!!

Sorry to say those are replica Bride seats, those aren't even Vios seats, could be a really bad Zeta III replica.... Not safe at all.

I really like how the climate control is the middle console tho...