It’s crazy to think about how far time attack racing has come over the last decade and a bit.

Living in Japan, I’ve been fortunate enough to watch it explode in popularity and grow – from my first few outings at Tsukuba when breaking the 1-minute barrier was a massive deal and where the fastest cars were running in the 57-second zone. Today we have two top-tier contenders: Under Suzuki with the current Tsukuba Circuit lap record of 50.366, and the car you see here – a no-budget-spared, latest-tech ZN6 Toyota 86 from HKS – the Tsukuba Record Breaker 03 (TRB-03).

Nobuteru ‘Nob’ Taniguchi actually achieved a 50.259 lap with the ’86 back in December, which actually makes it the fastest time attack car around Tsukuba, but that record time was achieved on slick rubber, as opposed to Suzuki’s time which was set on semis.

The ’86 was unveiled last year as the GTS800, the ‘800’ hinting at the power rating the team was aiming to extract from the highly tuned and stroked 2.5-litre 4U-GSE (FA20) engine. HKS set themselves this parameter, or restriction rather, to really push the limits of the aluminium four-cylinder boxer, rather than taking the easier road with an engine swap.

Andrew Brilliant of AMB Aero was called in to pen a full exterior and under-body aero package, and since then HKS has been hard at work developing and fine tuning the entire car in a effort to realise its Tsukuba record-breaking goal. In a way that has been achieved, but despite shaving just a fraction off Under Suzuki’s record, the ’86 ran 20km/h slower down the back straight than the S15, hinting at the benefits of the slick tires. But maybe the engine hasn’t been fully dialled in for the power level the aero was designed for…

Since seeing the car at the Tokyo Auto Salon a few weeks back where it was shown for the first time with its new HKS-themed livery, some changes have been made to the front, which proved somewhat controversial.

The front spoiler and the much talked about ‘Infinity Wings’ that AMB developed were removed and replaced with what you see here. As soon as images of the re-worked front end surfaced online there was instant criticism, with many commentators saying that the wings were removed because they didn’t work. According to HKS, however, the change to the front end was made in order to cut down on drag for the car’s demo lap at Fuji Speedway, which is a much faster circuit than Tsukuba, and one where a car as fast as this one requires a whole different aero package and setup with significantly less downforce for the longer straights. I guess we’ll find out for sure when the TRB-03 hits Tsukuba next.

Once Taniguchi was done shredding Yokohamas in the HKS drift ’86, it was time to jump into the time attack machine and parade it around the track. Finally, after a year, everyone could see and hear it in action.

After a few minutes of idling to get the engine warmed up, Taniguchi accelerated out of the pits.

From the rear the car looks as purposeful as can be, everything being carefully designed and laid out in order to be as functional as possible. Just look at those tunnels and the massive wing.

The car was only out for one fast lap, but seeing as there was no access to the pit wall I didn’t get a shot of it running down the straight. What I noticed, however, was the visible rake the car seemed to have at full speed; it was obvious that downforce had been reduced at the front with the new treatment, while the rear was probably still running a setting for Tsukuba.

With the lap done and people satisfied in have finally seen the ’86 run in anger, the TRB-03 was taken back to the pit and checked over.

Another difference I noticed was the modifications made to the hood.

There’s now a second opening behind the venting for the intercooler, which is easily identifiable as it’s a louvered aluminium sheet riveted to the carbon. Next to it, a new outlet for the exhaust to pop out from.

We weren’t allowed to get too close to the car in the pits, but from this image I can make an educated guess that the engine is no longer running a supercharger, but a turbocharger with an external wastegate. The intake plenum also looks like a different piece to what we saw last year, so there’s definitely been some changes made to get the 2.5-litre flat-four to hit that 800PS and 90kg/m (651lbs/ft) of torque goal.

The TRB-03 is scheduled to go out once more at Tsukuba in February, no doubt chasing down that 49-second lap. Can HKS do it? Will the Infinity Wings be back on it? We’ll just have to wait and see… 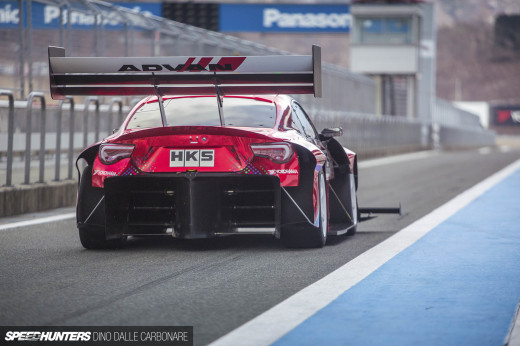 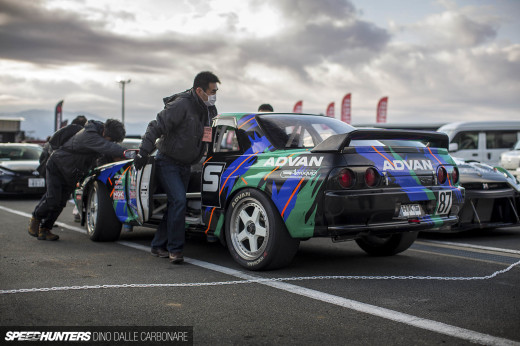 The Sights Of HKS Premium Day 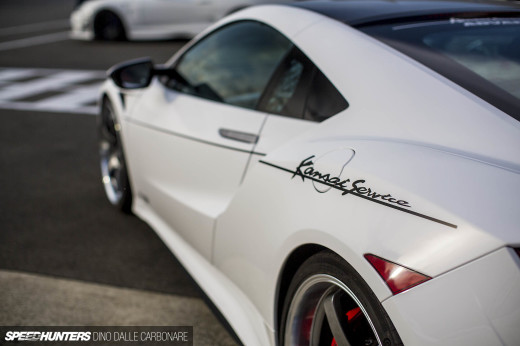 I don't see a hot side on that FI unit. Location of it also leads me to believe it is still a supercharger. Could very well be wrong.

50% of the butt are venturi tunnel, wow!

What's interesting is looking up the lap times at Tsukuba. Apparently the record is held by Kobayashi in a Super Formula Dallara SF14 with a lap time of 44.00 seconds. The Dallara is more than likely running a flat floor as well.

Infinity wings have been wrongly explained by the people who have designed them in WTAC's own promo interviews. I'm skeptical about their over all contribution to any lap time compared to other more critical components.

The only person who designed it was Andrew brilliant and his offsider so I'm not sure how they have explained them incorrectly. Is there some foundation to the design that you know that they don't?

MCA ditched the infinity wings based on feedback from their driver as well.

The marketing hype about more down force and less drag appears to be debunked.

It would seem that in the current day of tuning someone has a lot to gain from selling kids in stock engine AE86s an APR GT1000 wing to sell him on downforce. I think aero has become the new buzz word for people who have no idea wtf they are doing with metal and horsepower.

That really doesn't answer the question, Aero in 'production cars' is where massive gains can be made, if it wasn't so effective the top teams wouldn't be spending so much on it. You just kind of sound old and like you're missing the days or simplicity of big engines, push rods and no aero.

Ah no they didn't Mob, as Alex pointed out, they were ditched because the full assortment of parts hadn't been completed in time, it was also their first proper day testing at WTAC so rather than running the untested option they ran with a minor upgrade on last years.

Feedback from HKS was that the car was much slower in a straight line without the Infinity Wing and reduced downforce dramatically.

How so "debunked" mob? The team tested them and went back to Infinity wings already. Did you see drag figures? Did you read the article the nose of the car was pointed skyward so downforce loss is obvious. I love these hobby aerodynamicist know it all guys on the internet.

What live feed were you watching by the way where MCA removed them "based on driver feedback" maybe you missed the part about there were missing parts rocking up on race day and the team ran out of time? Seems like some anomymous poster with a an agenda as usual. Maybe you work for Voltex or Barry Lock? Or just nut swing as a hobby?

A properly designed spoiler do help; I do believe the main reason why formula car still faster is due to the lack of weight on itself & much smaller frontal area to begin with...

Sure. The point is with a difference that close it shows you how little aerodynamics play a factor at a track like Tsukuba to other aspects of a car like weight, etc.

That's not the point, you have zero empirical data to show what difference the Infinity wing does or does not make. It has gone faster on much less power than Under and is competitive with an unrestricted GT3/GT300 car so I'm not sure what your point is.

1 thing i missed from the last year coverage is that 1/2 door.
Seeing that only fractions of second were in favor of the 86 using a slick, it would be interesting to check it on semis.
With the new engine upgrades and dropping the "800" from its name i guess the figures are escalating and in a big manner.

I have been waiting for this after reading about it on the site and waited for it. It's awesome they used a fa20 as the base and just redfined the zn6 as car capable of other things then going sideways. Thanks the wait was worth it and article is great. As a Zn6 owner thanks.

should be keiichi tsuchiya driving that beast