Some of us find ourselves stuck on repeat when it comes to cars. You buy one of those special cars that you’ve been eyeing up for ages, or even one of your dream cars (I say cars, because there’s always more than one), and life is dandy.

And them something else catches your eye.

We all know what follows. You make a Craigslist and Facebook Marketplace for sale post and end up selling your existing car for way less than you should have, losing money hand over fist. As soon as the new owner drives away, it instantly hits you – that deep, sinking feeling of regret.

Paul Podobea, the owner of this BMW E36 M3 convertible knows the dance far too well.

You may remember Paul’s previously featured car, which was also an E36 convertible, but 325 spec. After he sold that car, Paul quickly realized how much he missed it and began debating whether or not to pursue another.

Once he saw a new render of Kei Miura’s Pandem wide-body kit for the E36, Paul knew it was time to build again, but this time around it would be an M3 convertible with a hardtop to boot.

Then there’s the color, Hellrot. Paul’s two favorite factory BMW paint colors are Laguna Blue (the color of his previous E36) and Hellrot, so he was fortunate enough to find a convertible in the latter hue.

That wasn’t the only lucky thing: one of Paul’s friends agreed to sell him the hardtop from his daily driver.

With a fresh respray and bodywork done, it was time to fill the fenders with some wheels and tires.

In the suspension department, CATuned custom coilovers along with CATuned camber arms give Paul the freedom to make small adjustments while still retaining a comfortable ride. He admits that the ride height isn’t as low as he would like it to be, but as it sits it’s much nicer to daily drive on LA roads.

If it wasn’t clear in the first feature, Paul doesn’t try to build race cars, nor does he set out to win trophies and awards at shows. Each car is built with a certain amount of originality to what it once was, with some motorsport influence along the way.

From the first ever shaved ducktail to the shaved antenna and hood nozzles, Paul’s ‘Pure’ modifications blend form and function into a near seamless build. This is not your archetypal wide-body show build. It’s not too hot or too cold; it’s just right.

While the engine bay remains stock, a Borla cat-back exhaust frees up some of the smooth inline-six’s growl while still remaining polite.

Inside, aside from a dished Momo steering wheel and fixed-back Momo seats, the M3 is also factory spec.

While wide-body BMWs might not be everyone’s cup of tea, sometimes you find yourself taking certain aspects or cues away with you that may inspire your next build down the road.

Rumor has it that Paul is planning a new Porsche 997.2 or 987 build, but only time will tell. Right now one thing is for sure: he’ll always have an E36 of sorts in the garage. 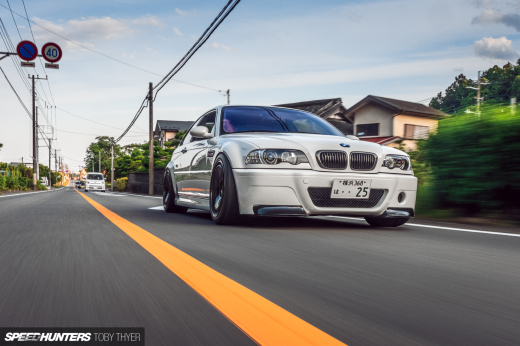 Just a heads up that "Hellrot" is not as metal as it sounds, but merely means "bright red".

And good to see that E36 not slammed onto the ground, its suspension works best at non-stance heights.

Hold the phone; changing name of my band to Kackenbraun.

In the article the owner says they'd like it to be even lower, but to me this is a perfect height for this car

let me guess before I read the article, its another stock car with overfenders?

To pull quote -
"While the engine bay remains stock..."

ummmm no.... it also has an aftermarket exhaust, a Momo wheel, AND bucket seats!

The "not too hot, not too cold" is the perfect way to describe this car.

I really like it as I could imagine owning and driving it.

As much as this build is good and the color is the best offered by BMW as stock colors for this chassis, our buddy here seems really stuck in repeating himself.
The only thing I didn't like about the build is the hard top on a convertible, it could be left soft top or go for the non-convertible as a base car.
PS: the car is missing a white SH sticker on the windshield to complete the red/withe look.

Seems like the rear wheel offset/backspacing would be hard on wheel bearings. Does anyone have experience with this?

you live with it and replace wheel bearings when necessary. it's a service part.

I fell in love with Paul's last BMW, but this one definitely outdoes the last one. The hard top really does it for me.

It's unfortunate that people feel they need to justify their ride height these days. Like having your car at a useable, enjoyable ride height is something you need to apologize for.

bring it to HIN

Although over fenders aren't really my 'thing' I do love these Speedhunters articles about normal people's cars. Often we see huge budget projects, race cars or super cars - and not that there is anything wrong with that - but this, this is something the majority of us 'normal' people could achieve with a bit of imagination, a place to work, a few mates and some tools.
I know someone will say 'there's no imagination putting bolt on fenders, wheels and coilovers to an already good car' but think about it; this guy imagined how he wanted his M3 to look, he just went out and did it. I doth my cap sir!

Needed to go widebody for those 255s huh? Lol

I'm a fan. I think the Pandem kit matches the body lines really well. If this car is actually his daily then I understand the tire dimensions but otherwise I think the wider wheels/tires need to be fitted.

I used to own a BMW E36 base model and I loved that car before it got t-boned. I have an E46 now but mechanical issues are ridiculous compared to the E36.