‘What’s happening with Project GT-R?’ ‘When is the next update?’ ‘When will it be finished?’

These are just some of the questions I’ve been getting from people over the last year, if not longer. Well, you’re all about to find out. It’s a long story which I’ll need to explain in a detailed series of posts, but I wanted to first give you a synthesized recap of what’s been going on up until now, and what’s happening in the next few days.

You see, Hashimoto Corporation, the company that distributes Speedhunters merchandise in Japan, approached me a few months back with an offer to showcase Project GT-R at the 2018 Tokyo Auto Salon. Would I ever! I jumped at the chance of a lifetime, but with it came with the responsibility of getting the car ready in time.

Like with all cars destined for a large international show, it was always going to be a rush to get everything ticked off the list, which is why I’m putting this post together on the floor of Kawanishi-ya in Yokohama. Here, the final parts are being fitted before I take the GT-R to Makuhari Messe for TAS setup on Thursday afternoon.

But let’s rewind a little. There is a lot I need to bring you all up to speed on, starting with the engine, which is about 80% complete – at least for this first step of mods. The RB26DETT is now running a pair of HKS GT turbos, and with that modification came the need to upgrade the fuel system, something that was done back in summer.

Not wanting to do this step twice, I went straight to a large-capacity fuel injector setup with six Bosch Motorsport ID1050x injectors from Injector Dynamics.

The car then went on the dyno at Do-Luck so Italian engine mapper Ennio Rancati could set up the Haltech Elite 2500 to a point where I’d at least be able to drive it around to other shops. Limited to 4,000rpm and with a fuel cut in place if boost rises above 0.75bar (11psi), it’s far from a proper tune, and that’s because there are still Tomei Poncams and a Tomei 1.2mm metal head gasket to go in. The latter will allow me to raise boost to around 1.2bar (17.6psi) and shoot for 500-550hp.

The car then stayed with Nakamura-san at Worx Auto Alarm who took care of a bunch of smaller things which I’ll go into more detail about in the near future.

This included fitting the button for the KW HLS (Hydraulic Lift System) and replacing the MFD LCD screen with a fresh unit from R34 GTR MFD in Hong Kong, as well as some other touches you guys will definitely like. Or at least I hope you will!

Then came the need and want to make sure the GT-R stood out at the biggest show on Japan’s aftermarket tuning and styling calendar. Because as cool as a Bayside Blue BNR34 is in Japan, there are a ton of them around and it just wouldn’t stop people in their tracks.

That’s where Narita-san from Tokonatsu Factory and Nakamura-san of NuklHeads came to my rescue. With just two weeks before TAS, they told me to bring the car up to Nakamura’s shop in Utsunomiya where it could be wrapped in a color that would ensure a statement was made. I don’t want to give away what color the car actually is until it’s all complete and sitting on the booth – hence why the opening shot of this post is in black and white – but hopefully it’s all going to be worth it.

These two guys and a crew of friends worked through New Year to strip the car down and prep it for the wrap, and I was blown away by their level of dedication. It’s because of their hard work that the car looks so cool right now. Nakamura-san, who is a pro painter by trader, took every single paint chip, scratch and dent out as it would show through the wrap, but here he is fitting the Renown x Speedhunters steering wheel I’ve been holding onto for a while. I figured a debut at TAS would be just the right time to show it off.

After three days of prep work and serious cleaning, de-waxing and de-greasing, it all began.

I was able to head up to Utsunomiya, about 200km north of Tokyo, twice to see these guys in action and learn all about the ever-evolving art of wrapping, which until a week ago I knew very little about. I then had to fly to Malaysia for the RWB Museum opening in Johor Bahru (stay tuned for coverage), but every day I would get a batch of images of the progress being made, including detail shots of how they tackled issues with wrapping the overly-angular shape of the R34.

Yes, that is a Speedhunters ‘Speed’ insignia on a set of overalls – this very special Earnest x Speedhunters collaboration will be dropping soon…

Narita-san is no stranger to Speedhunters; we met him years back while he was drifting his R33 GT-R at Nikko. He’s got a nice collection of cool cars which I’ll be back to shoot in the next few months, including a Z06 Corvette which likes to light up the rear tires in third gear.

After landing back at Narita Airport on Tuesday afternoon, I dropped off my bags at home and jumped on the train up to Utsunomiya to pick up the finished and fully-wrapped car. I took it easy on the return trip so as not to risk even one single stone chip, and finally made it back at 2:00am.

The road to TAS continued today as I met Kawanishi-san at his shop in Yokohama at 10:00am where he’s been fitting a mod that’s extremely well overdue on Project GT-R: a serious brake package. We’ll be working right through the day getting all four corners upgraded, and then fitting up a special set of wheels for the show that should be dropped off any moment now. 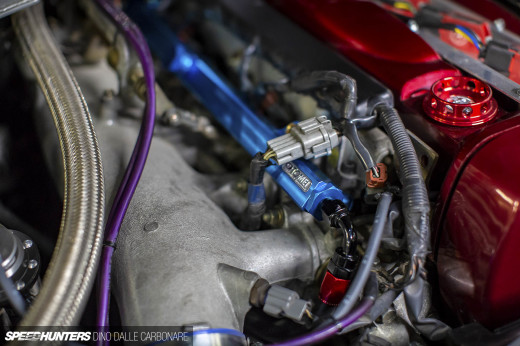 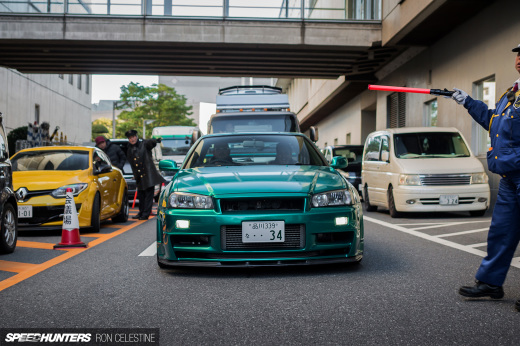 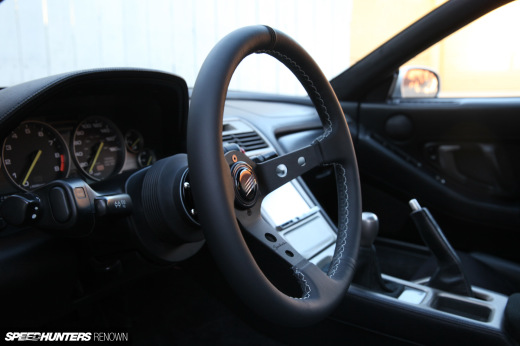 The Renown x SH 100 Steering Wheel: Get It Now!

Good luck this is gonna be exciting waiting for the next post to see what color you pick for the project GTR.

I think he went clear and he's trolling us!

Can't wait on the wrap! The upgrades seems very PROPER too! Way to go!

Mad props to you Dino! Nice idea for the car to stand out, I honestly cannot wait to see the colour. Also, I love how you wrapped the front left light, gives the car a mean character. You can really see that you love this car head to toes!

Haha I really like that too but we had to pull it off, will be re-installed at the show! Didn't want to risk getting pulled over ...

Blake: I took project NSX to Spoon for upgrades!
Dino: i ToOk

* pRoJecT gTr tO gET iT PRePPEd.

hahaha jokes aside,
It's coming out great, I'll wait eagerly until it's unveiled xD

Nah Blake just got his NSX done up, now you!
Great year for speedhunters so far (^u^)

The wrap probably white. After all, white is the new black.

So your car had an actual Italian Tuneup?

Yep it's definitely an Italian who toucha his rb26dett (spaghett) xD

Still, Italian tuneups are traditionally known to be more effective above the 4000rpm cutoff? I suppose even Italian tuneups have gone a little softer these days. It'll probably be much spicier when the Nismo chef has finished cooking up his receipt. For now, lets just call it Haltech, Al Dente?

I'd rather have the Japs do it haha. (And that was a meme reference xD)

Ask Under Suzuki who does his "tuning"

Loving the italian jokes! Keep it up, you guys can do a bit better though, I hope?

I admit, my jokes are a bit subpar these days. Can't do much about it though, as my brainpower has a low rpm limit after a certain amount of overtime hours. I think cappuccino works like one of those jdm overboots buttons, but for my brain? One is fine, two cracks the block.

*still no idea which meme...

Was it Tony from Fiat or his cousin?

Just asking so I know where to send the tow truck.

Awesome! I'll keep a sharp eye out for it while I'm there!

Please do, the Speedhunters booth is in Hall 2

Wohoo! Im flying this early morning and excited to see it in person! Hope I can meet you personally Dino. Are you there on Saturday? By the way I've noticed that you've changed your front bumper. What is it?

Yes I'll be there every day

Bumper is Nismo Z-tune, been on the car for over a decade

Haha I thought you changed it. See you!

It's a wild guess. Can't wait to see it!

Watch it be something like an iridescent or pearl colored wrap.

My guess is candy apple red.

need to wait the Salon

Imagine its a salmon pink XD that would be a real show stopper!

Pink is ok for sweaters, cars...not so much!

I beg to differ. One vip build I saw once was a pink and was not too shabby. But hey everyone to their own!

Cool to read some news about project GTR :).
Will the wrapping be a temporary change of color for show + few weeks or do you intend to keep it longer?

I'll keep it for a while, I really like it!

Lmao if it’s purple I’m gonna be real happy. I love purple skylines and there’s not enough of them

Yeah, all wrapped up in a special new color called Statutory Grape.

That’s nice, but I was thinking more of a Dodge Plum Crazy purple, that’s always been my dream R34 color

Looking awesome and can’t wait to see it in the flesh tomorrow! See you at TAS 2018!

See you there man! Car is all set up and I just got back home

Awesome job!! Really excited to see Project GT-R make it to Tokyo Auto Salon!! Once Dino is done with the car, I will make him an offer he can't refuse! Right, Dino??

Lol!! Sounds good!! By the way, aren't you worried that modifying your GT-R can potentially reduce its future resale value? R34s are supposed to sky rocket in values further as the cursed 25-year wait period is over!!

Me at every high performance shop I worked at:

Boss: So, we're going to be getting some cars ready for SEMA this year.
Me: I'm taking all my vacation time this week. Good luck!

Great choices for a receipt and level of expectations. In the DR30 with the R34 RB26 we put down 532WHP at 19psi. I'm running those same injectors, Haltech (brilliant), and set of turbos. The smooth and endless power and feel is exception. I hope you enjoy the mods as much as I do.

Thank you for the great coverage.

Can't wait to get it finished and start enjoying it properly!

Eager to see it in person tomorrow! Saw tons of cars tuner cars heading to Tokyo on the Tomei this morning. It will be awesome!

Stop by and say hi!

Plase send me one too hahaha

For some reason I thought you got Tomei turbos in a previous article a while back?

It's a long story but all will be explained soon!

Is it gonna stay this colour or go back to Bayside?

Will keep it wrapped for most of the year probably

Nice one Dino - I've been watching your car for more than 15 years - seems like it should have a life story by now. Tell you what though - every chapter is epic

Mad engine mods love them, big fan of your car