SHARE This Is What Supra Dreams Are Made Of

It’s crazy to think that HKS has been putting on its Premium Day at Fuji Speedway for 10 years now.

The annual event kicked off in 2008 with a small gathering to celebrate the company’s 35th anniversary, but fast forward a decade and it’s now evolved into something that’s a must-attend on my calendar. If you are great with math, you would have probably already figured out that 2018 marks the 45th year anniversary of the world-renowned aftermarket Japanese performance parts manufacturer.

Before I dive into my main coverage from HKS Premium Day 2018, I want to take a closer look at a couple of cars that I know you guys will be very interested in, starting with Max Orido’s recently refreshed JZA80 Toyota Supra.

I saw the red Supra at Tokyo Auto Salon a few weeks back, but every time I doubled back to check it out it was surrounded by people. That was cool though, as I knew Orido wouldn’t pass up the chance to hit Fuji Speedway now that Rasty, who Orido drives for in time attack events like Super Battle and Option Super Lap, has put the final touches to the car.

The whole idea of this build was to take the original base car and tone it down, if that’s even a term acceptable to use with a beast that pumps out 600+hp. But on top of adding a few modern touches like a carbon roof and a roll cage, it’s exactly what’s been done.

The first thing you notice is that the big GT wing the car used to have has been ditched in favor of new hatch/trunk design with an added ducktail-type spoiler. The Varis-penned Ridox kit still sports screwed-on rear fenders, but the bolts that secure them are now black, so a little less in-your-face than the chrome ones previously used.

Every time I’ve come across Orido’s Supra it’s been running Advan Racing wheels of some sort, but at Sunday’s event it was sporting a set of fresh white RAYS Volk Racing TE37s, which have really altered up the overall look and feel of the car. Big Project µ 6-pot calipers are easily visible between the spokes.

Later on in the day I came across the Supra in the pits as the Rasty mechanics were getting it ready for its outing. It was there, as I quietly admired it, that I realized the JZA80 really does look its best when things are kept very simple, and the Ridox aero really does just that. On this 2018 reimagination of the car, it looks even more to the point with the return to factory side mirrors, although they’re finished in black to mirror the carbon fiber additions around the body.

It really comes as no surprise that a race car driver like Orido would know how to restyle a car properly. This thing oozes function from every detail.

Here’s a closer look at the ducktail addition to the rear hatch, which I wonder might look better without the black accent?

This things is so beautifully built and special that we should really be giving it more space with a full feature, but until then you’ll probably notice that the 2JZ has lost the HKS T04Z it was running for years, but gained one of HKS’s new Mitsubishi Heavy Industries-made GTIII turbines, which actually looks a little smaller.

But don’t let the dimensions fool you; on the dyno that HKS brought to Fuji the car recorded 625.6ps, or a corresponding 617hp. The power comes in strong from the mid-range, but this new series of turbochargers give better pick up and a more progressive jump into the power curve.

Being rear-wheel drive, the Supra has to he a handful to throw around the corners, but then again, the owner knows all there is to know about driving cars sideways.

The more I looked at the car, the more I wondered why the hell we don’t have a Supra project car in the SH Garage?!  Surely we need to address this as a matter of urgency. 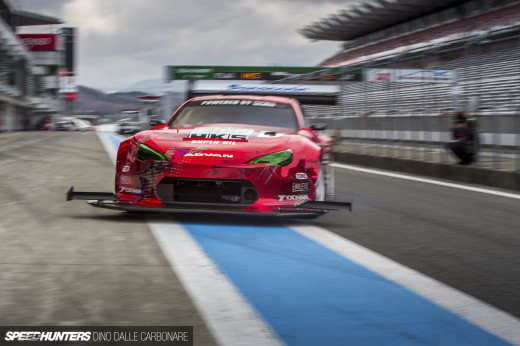 Get Ron to add a supra to the SH garage.
He's still not said anything about his project yet....

Ron's already picked something up. I'm sure we'll be hearing all about it very soon

We all are! And all these rumors of a possible GR version. But then again you have to wonder where TRD is in all of this. Toyota sure likes to confuse the hell out of people. I'm sure Modellista will make its version too...

Supra project would be real cool. They're really rare where I live, so the coverage never bores me.

They are rare here in Japan too! I just don't see them as often as I used to

I see more of the previous gen model to be honest.

Man I wanna see some interior shots. I assume it's more of a function>form build in this case.


And I don't know why sometimes from time to time I get logged out of this site and I have to re login like it's kind of annoying tbh.

Interior was badass! I gotta hit up Manabu and ask him to give me some time with his new ride! As for the site issue, we are looking into it. Any info on what browser & OS you are using?

Would love to see a feature on this. This is one of the best looking supras i've seen so far. So. Freaking. Beautiful. For. A. Purpose.

Also running the latest version of Chrome on Windows 10. Somehow it also happens on OS X with chrome too. May be a bug with the browser.

isn't this Orido's recently bought and rebuilt supra?? thought he sold the original blue-turned-red rider street supra about 2-3 yrs back. I don't know....i like it but maybe its the black accents. It just didn't "grab me by the front of the trousers and give a good rummage!" The original Ridox supra is still King in my eyes

Will find out all the info once I shoot it properly. The hardcore one was badass indeed but the tech is there to keep it savage yet make it more streetable too

What a wondrous time we live in, when a power rating of 617 produces a thundering meh.

Everything has to be 1000 HP plus. Have you guys ever driven a Supra with 1000 HP? It's a horrible proposition for a road car. Sure, more than achievable, but futile in most situations

I feel like it needs that trademark Ridox GT wing, instead of the ducktail spoiler... But maybe, that's because I'm so used to seeing his car with a GT wing, for what seems like...a lifetime.

I know what you mean, but I like he's trying out some new stuff. Wish he'd update his website lol

Do you know what brand duck tail that is?

This is an AbFlug Wing

Max knows how to build a supra, this is absolutely perfect

The Ridox kit is still the best there is for the Supra. Orido knows not to mess with the original design, and he just improved on it. The overall design of the front bumper looks like something that could have came with the car from the factory itself!

So true. Would be cool to see him do a GT-R.

Orido's Supra is still by far my favourite for being "normal" looking.

It's coming. We've been teased for years now in typical Toyota fashion. Seems it takes them 10 years to make any car these days. Except Crowns. They seem to knock those like like bread rolls

When i ventured into megaweb 2 weeks ago that place is full of crowns..... they should call it the hall of crowns

Yeah I've liked Crowns from the past but the new batches over the years are so boring. It seems all they do is redesign grills.

They're on it, the new one will have a BMW 6cil engine and will be based on the future Z4

Aha, Max has aged his styling well. Toned done and refined. It's a good look and no GT wing suits a practical street car a lot more. 600hp is plenty, lets be honest lol. (I'm reminded when Tsuchiya-san wanted to prove and race his duck-tail 86 against all the GT winged ones).

To the unfamiliar, his tail lights just look like OEM series 2, but those white rings aren't the norm. I wonder if it's an LED mod?

Surprised the rear bar isn't even slightly diffused heheh. And the intercooler opening isn't ducted/fitting which has always bugged me a bit, but I'm nitpicking... He put foam squishies on his radiator though!
Great car!!

Lol the last line had my giggling

Supra on the menu. Price in USA is around 60k for 6speed turbo

Come buy one here quick, they are still affordable

i was blown away by the fact that supras became so rare even in Japan, last year when we met at wekfest japan and you told me so I realized how lucky I am despite all the troubles and misfortunes I came across with my supra here in Italy. I just hope that other tuners will try to make something new for this old platform just like they do with the old gtrs. Anyway this one looks simply fantastic, I have to plan another trip to Japan to see it in real life I guess.

The trend is very much there. Except for events and PA meets I simply don't see them on the streets. They are either all hidden away, shipped off to other countries or King Buyer has all of the remaining ones haha

King buyer is mental!! I had to make a brief detour wile I was in tokyo just to see it with my own eyes ahaha, I'm addicted to his website since I was 14.

Thats great n all, but wheres the Project GTR engine upgrade that was promised on the wrap post??????????

Working on it!! Had to concentrate on all the events we had this month!

I'm in love, what a beautiful machine!!

Supra is 25 years old but you couldnt say it when you are looking at it. Timeless beauty. Maybe Toyota should consider doing what Porsche does for the 911 - not really change it. I wonder how it would look if you apply the same treatment as does the Porsche did from type 993 to 991.2 :))))

These are the kinds of Supra builds I love to see. Don't get me wrong, I love a Supra with big meaty drag radials and 1000+ hp but I feel like power levels like this are far more usable day to day and on a twisty track. Can't wait to see a full feature.

Thanks for doing this spotlight/feature Dino! This is my idea of a proper supra. Stunning car.

Awesome mate! As a long time Supra Owner from 2000, I just keep coming back to them! I hope one day out track Supra will be featured!

What's wrong with the ducktail and its current black accent? Looks fine to me...