It’s something that we’re all acutely aware of.

For all the mega builds that we see, it’s the humble, home builds that always hit home the hardest. Before the 2017 SEMA Show, I was embedded at iDL Garage as Deity Motorsports put the finishing touches to Scott Afters’ Liberty Walk and Air Lift Performance-equipped McLaren 12C. No doubt, that car was something special to behold in person, but I couldn’t take my eye off something far more humble, not 20 feet away.

Just outside the main garage door, parked in the corner of the lot, was James Lam’s BMW E36 M3.

This wasn’t a car that was mid-SEMA prep, either. This was (and remains) James’ daily driver. With all the hype and last minute panic surrounding the SEMA showstoppers, this BMW was the perfect contrast to the wildest time of year. It speaks volumes when the only preparations James had to make for the shoot was to throw the keys to his friend so we could drive it to the location around the block.

I don’t really have any sort of morale building narrative to go with this feature, nor am I aware of an inspiring back story to the build. It was just a case of it still being bright out, I had a camera, and this car which kept grabbing my attention was there in front of me.

There’s a lot of things that I like about this car and how it neatly fuses together track and street elements almost seamlessly. It has just enough of everything, without too much of anything for it all to work as a coherent package.

The E36 model in general is destined to be a classic of the BMW stable, if it isn’t already. They’re still relatively affordable and I have the feeling that we’re going to look back in a few years at their value today like we currently do at air-cooled Porsches with the benefit of hindsight, although maybe not to the same extremity.

While this is a simple car in many ways, it is still a considerable build. The rear quarter panels, for instance, were flared using non-M E46 front fender arches to fit the rear wheels with minimal negative camber, before the whole car was repainted in Diamond Schwartz metallic by Strasse Sport.

Behind the turbofans are BBS RS wheels measuring 17×9-inch ET22 at the front and 17×10-inch ET22 at the rear. The Nitto Motivos have the slightest stretch with 215-section tyres on the 223mm wide front rims and 245-section tyres on the 254mm wide rears. It’s just the smallest of stretches to help the tyres clear the bodywork while allowing a more aggressive wheel fitment.

As expected, the exterior upgrades are subtle, too. There’s a strict OEM+ vibe going on with a Ma Shaw LTW-style raised rear wing, Mateo Motorsport rear diffuser with a Harrison Motorsport front splitter and under-tray with fog light delete covers installed in the OE front bumper.

“I remember years ago seeing Mike’s [Burroughs] S54-swapped E36 from Stanceworks. That was one of the E36s that stood out to me; it was just so simple and clean. That’s what I had in mind when I picked one up. It was supposed to be just wheels and a drop, but there is an endless amount of aftermarket support for the E36 chassis and I don’t know where to stop,” James told me over e-mail, weeks after our shoot.

It’s well known that the US-spec E36 M3 received a neutered version of the S50, which was down some 40hp on the European equivalent. James has done his best to offset this difference with Turner Motorsports shorty headers mated with an Active Autowerkes Track Pipe exhaust setup including front and rear sections along with their own silencers. There’s also Bavarian Autosport ignitions coils and a JB Racing lightened flywheel along with a Turner Motorsport tune.

The interior is a balanced affair too, as you would likely expect having read this far. Just enough to feel special, but still easy to live with from day to day. A pair of Recaro Pole Positions with subtle BMW M branding, a CAE shifter with a Momo Tuner steering wheel are the driver’s connection to the car. There’s also an Autopower roll-bar, Hard Motorsport door pulls and Aeroflow Dynamics rear seat delete panel.

Who wants back seat passengers, honestly?

That pretty much covers the main talking points of James’ E36 (actually, it also has Brembo brake discs with Hawk street pads and ECS stainless lines), but I hope you agree that it’s car that has become so much more than the sum of its parts.

There’s something very real about it, which is probably why I spent more time browsing E36 classifieds during the process of writing this article than I should admit to. But maybe this is the last call for the E36 before prices rocket?

The BMW E36 on Speedhunters 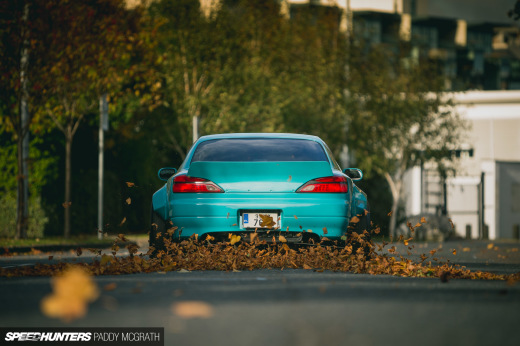 When It’s OK To Rocket Bunny

I think you're right about e36 prices having hit rock bottom now. And seeing how they are getting really popular in the drift scene now as well, prices should be going back up. You have a fun reliable daily now, so why not have a toy as well?

cool to read an article like this on SH.Where you actually can afford a car like this - as its not an extreme built or uberrare like some other models.
Speaking of rare on the other hand - its acutally quit difficult to get a good condition E36 here in germany nowadays.
I drive a CLASSII e36 with the rear wing ect- and often thought about buying a M3 - but many e36 over here are tuned badly or pretty rusty- speaking about a car that is way over 20 years old.Finding a good m3 with a reasonable price is not an easy task.Many owners ask for ridiculous prices compared to the actual condition - which often is ..yeh.lets just say bad.
Iam not so sure if the E36 will get a classic in germany,maybe the m3 version, if you ask people here - the e36 is somewhere compareable to the civic reputation.If it wasnt such a fun car to drive-right?

I think the E36 has the same problems in Ireland, too. Difficult to find clean examples and they have a mixed reputation. Ideally, I'd love a clean 318iS and slowly convert it to M3 spec but with an S54. I can dream, right?

Awesome car. But it should say "strassensport" not strassesport. Couldn't he take the 3 min to research and look for the correct word in german?
He put in so much money and time into his car.

The company who painted the car are called 'Strasse Sport' - https://www.instagram.com/strassesport

That means the company name makes no sense at all^^

Do all the companies names have to make sens?

Can we have a few more long shots of the car without the douchebag driver pouting?!

You mean the guy who gave up his evening to come and drive the car for James so we could shoot it? Your comment says far more about you than him.

Oh wow... if you never mention that the rear fender flares were actually adapted from a front fender, I would never have known. That's quite amazing. I thought it was just rolled wider!

The turbofans suit the car to a tee. A very clean and simple looks overall, which I thoroughly enjoy.

Who would want back seat passengers?

Me, honestly. I want to seat 4 and take them all for a ride that shows my inner craziness.

I've contemplated fitting fixed back seats into the GTI so I physically can't take passengers.

This reminds me of high school. I bought a gutted AE86 and never put the back seats back in it. Kids would run up to whoever had a drivers license after school everyday, just so they wouldn't have to walk home. I always took the same friend home because it was on the way to my house anyway. But even the desperate ones would say "I don't care, I'll sit on the floor." Then you play the legality card back at them hah

I like the front strut brace. Is that a custom job, or off the shelf part? Great colour for an e36 too. 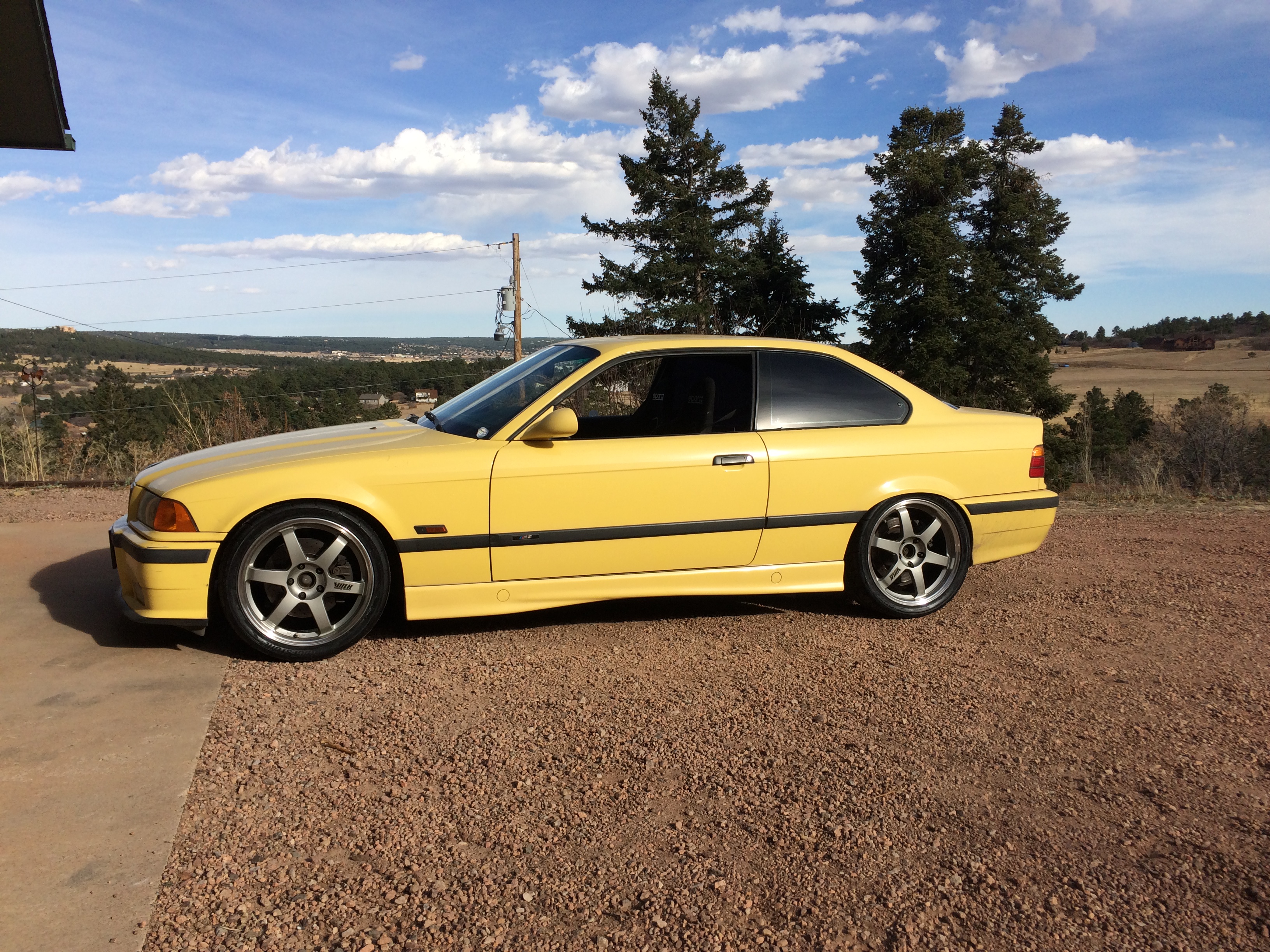 Turbo fans...I picture some guy at BBS in the mid 80s coked out of his mind coming up with that name. His name was probably Chaz.

Has anyone told him that turbofan covers would never be mounted that deep into a dished wheel? I know they're just fancy hubcaps when they're on a street car, but at least mount them so they look like they could work.
I like the car though, good stuff.

I think it looks better mounted deep in this case. You can show off the wheel lip. Makes perfect aesthetic sense to me.

I do really like the turbofan covers, I just want him to get some that are closer to the proper size/location for those wheels so they don't look completely silly.
I like the rear seat delete, it makes good visual sense for a car that's trying to lean more toward the looks of a racecar that a street car. The roll bar turns the back seat into useless extra weight anyway....

Generally speaking you want a tire that is about as wide as a wheel. What you actually see in the 15" wheel category is a 15x8 paired with a 205 and a 15x9 paired with a 225. When you get up into the 275 range it isn't unreasonable to see a 15x11. Some stretch is good as it helps keep the contact patch from flexing. Not sure how that applies to 18s since I don't deal with them a lot, but the aspect ratio would certainly be different. Some food for thought.

It's also worth noting that different tyres run at different widths, despite having the same number on the sidewall. From memory, I think Nittos run wide in that regard.

True! You were right in what you wrote though...that is a slight stretch. I wouldn't really want to go any smaller on the tire size or larger on the wheel size.

Wheels are too big, looking from the rear they just look disproportional, and I agree, the Turbo Fans shouldn't be deep-dished but I give kudos to people who look outside the box for different looks. Have always liked the e36 and hope to see more modified versions for street. Snatch 'em up and start building!

Thats not a neutered version of an S50 engine, has nothin to do with that, not a single bolt. Its a cammed and stroker M50.
Than again its a nice car and its nice to see 90s German's.