SHARE Is This What A Hot Hatch Should Be?

If, like me, you grew up around hot hatches, you’ll probably know that many of the models that defined the category are now not quite the same as what they once were.

Take the new Honda Civic Type R for example. Aside from its name, that car shares nothing in common with the original. Where the EK9 – or even its performance VTEC predecessors from the ’80s (EF9) and earlier in the ’90s (EG6) – were all about being lightweight and simple, the 2017 Civic Type R is heavy and complicated. That’s not to say it’s a bad car – quite the opposite in fact – it’s just different. Once upon a time, a hot hatch represented performance motoring in its most basic form. It was a three-door, compact, FWD hatchback that was straightforward and effective.

A lot of that original spirit can be found in the new Toyota Yaris GRMN.

Toyota isn’t the first manufacturer to build such a machine in the modern era; ‘superminis’ have been around for a long time now and there are some very good examples on the market today including the Ford Fiesta ST and the Volkswagen Polo GTI. Despite being a European creation at heart, the Yaris GRMN is, however, the first Japanese performance car of its kind in a long time. That’s unless you want to include models like the Honda Fit (Jazz) RS, Suzuki Swift Sport or the Nismo March, but they seem more like psuedo performance cars than actual performance cars. The turbocharged and 5-speed manual equipped Suzuki Alto Works is the closest there is, but it’s a JDM kei car that’s limited to 64PS (63hp).

The Yaris GRMN – that’s Gazoo Racing Meister of Nürburgring – draws its inspiration from the new Yaris WRC, bringing a genuine sports variant to the Yaris range. Unfortunately, for now at least it’s a limited edition model of which just 400 examples will be made, and they’re only being sold in Europe.

In the horsepower and weight stakes, the Yaris GRMN is both more powerful and lighter than the Toyota 86.

Another thing that makes this car a bonafide hot hatch is its range of transmission options: just one, a 6-speed manual with Torsen limited slip differential. You also get a reinforced chassis, Sachs-based sports suspension, 4-pot callipers at the front end, and 17-inch BBS forged wheels.

Those wheels set the tone for understated bodywork; side skirts are noticeably absent, but a large rear hatch spoiler is standard, as is the lower rear diffuser. It’s simple, just like a hot hatch should be.

On paper, there’s a lot to love about the Yaris GRMN. The price (from £26,295) is not one of them, nor is the fact that the model is not going to be available new outside of Europe.

What it represents, however, is hope; hope that the Gazoo Racing Meister of Nürburgring spark trickles down into Toyota’s global Yaris and maybe even the Corolla range; hope that Japanese manufacturers get back into producing modern hot hatches that are actually worthy of the moniker.

So how many of you guys have fond memories of a front-wheel drive pocket rocket? My mid-’80s AE82 Toyota Corolla FX-GT definitely provided me with some fun times! 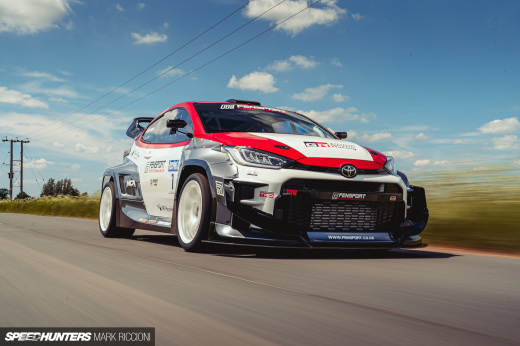 Horsepower is like breast implants - you go too big, you're just gonna hurt yourself.

There's an awful lot of ground clearance going on there.

WHY IS NOTHING IN THE US?

Come over to India my man, all they care 'bout is mileage. It's depressing.

Because we buy Chevy Cruzes and Hyundai Elantras here in the US.

I want this so freakin' bad. I drive a 5-door Yaris for work and it is a perfectly decent car for commuting and delivering car parts. So, to see that this familiar vehicle is being made into a real barnstormer is quite exciting.

The old one was available as a 5-door in some markets, but it's starting to get a bit old.

I'd add big mud flaps, a set of the gnarliest snow tires I can find, and go hoon that in my local SCCA Rally X in the Stock Front Drive class!

You can also stand under it when it rains.

a true ae86 successor, holy crap its the end of the world guys Toyota's actually building cars like it used to.

Sorry but when you look at the body of the ae86 and gt86(just the body not drive-train layout), the gt86 just looks too different; the way the vehicle curves is completely different from the original. Where the original has a lift-back trunk the gt86 has a notch-back(IE not a hatch, therefore not a true successor or at least not following the same philosophy) . In any case body wise the Yaris GRMN is more worthy, still wonder if they'll ever release an FR layout Yaris based car outside of japan.Just grateful they decided to revive the name even if its only somewhat like the original(and yes I am aware that there was a notchback ae85, but that's not the name they decided to revive; now that I think about it they should have revived the Sprinter name rather than the chassis code)

It's not an AE86 successor, it's a Yaris TS successor.

More another hot hatch, but maybe a little more than just a hothatch sir. AE86 successor, would be the 86/gt86 :). or i guess when the TOYOTA S-FR comes out!.

Absolutely not an 86 successor in the slightest. What a ridiculous statement.

Why only sell in Europe? Bad move. Definitely bad move.

Because they only have 400, plus Europe already has had hot hatch Yarises in the past.

Actually the WRC team is in Finland now.

ohw common now toyota, bring it on here in Philippines... I am sure a lot will buy this is one of the countries where toyota rules ^ ^

Enjoy your SUVs and F150s

The only interest i have in trucks is to use them to haul my racecar.

I thought Toyota was making a new budget friendly RWD car to make up for when they went way over budget making the GT86. It was supposed to be based on the Yaris sedan chassis except RWD. It's been a long time since I've heard anything on it though.

They will/should be sir, the TOYOTA S-FR !.

They need to make more of them, not this limited run etc, but do like!.

Hopefully if the reviews are good they'll release a new TS/RS version afterwards.

I quite like it. Toyota needs to do something about the mundane lineup it has here in the states. Lol the corolla...

Lightweight is the key word. I once owned a Peugeot 206 GTi (not the 180 Hp version but the 137 bhp with 143 lb-ft of torque) powering a relatively light 1050 kg / 2313 Lbs (Manufacturer's weight figure) body. Combined with short gearing like just a tad over 20.5 mph / 1000 rpm that thing was quick, climbed up a modest hill in third gear once moving. Yes horsepower sells but in day to day driving torque is more important.

I love the performance aspect of this car, but holy crap is it ugly!

My first foray into car ownership was a clapped-out 1984 mk1 Golf GTi, I then progressed to a mk2 1,8 16v. As an avid Italian car enthusiast during my early 20's I decided to purchase a Fiat Uno Turbo which was an absolute riot after I'd upgraded the suspension and brakes. It was the turn of the century when after moving on to a string of 3 series e30, e36 and e46 that I decided to try my hand at something Japanese.

I took the plunge and got myself a3 door Civic VTEC off the showroom floor in 2001. I put fast too much money into it and after 5 years of Honda i traded up for a 2ZZGE equipped Toyota RunX RSi. At that point I was able to run an e46 320d as a daily and duly put my attention into the somewhat overlooked Toyota. By the time I'd sold it however I had it screaming into the 9's with bespoke Cosworth internals, AP Racing button clutch and LSD, strengthened gearbox with slightly longer ratios. Since my hatchback menu has been decidedly VAG but I'm very excited about the GRMN Yaris. Hopefully they'll continue their involvement and decide to produce more and sell them outside of Europe as well because I have only good memories of my last Toyota hatch.

I would buy one and I am a Subaru guy. I have always loved the hot hatch segment but we never get anything cool like that in the states.

From car sales logic perspective they probably won't bring to the states because that would cut into GT86 sales. Which means they would have to discontinue the GT86/Subaru BRZ. And I would hate for that to happen. Sure, the supermini would actually be faster than the 86/BRZ but I still love the cars reguardless. They are a lot of fun to own and my BRZ is a great alternative to my WRX a lot of times.

They just need to bring this thing over here to the States so I can buy it. Then I will have a Turdbo AWD car, a fun RWD sports car and an awesome hot hatch/supermini. I don't mind owning all three. Lol. I would be like the poor version of Jay Leno.

Awesome! This will be so much fun. Fast and nimble. Here is hoping that Toyota do other hot versions using this branding. Anyone for a C-HR or Avensis GRMN??

Probably it would atract more young buyers if it would be lighter, smaller engine with similar punch, cheaper to maintain and insure...

Now, this looks like a cool car. Simple, not too over-the-top looking, (was going to say cheap, but hopefully when it's released I'll confirm) affordable (kind of) for younger people, and a 6 spd manual that (hopefully (?) ) will feel good to shift. I almost wish that hot hatches could take a second off pretending they should be fast like mid-sized sports saloons and sipping fuel like hybrids. This is sort of on the right track for that IMHO (compared to the competition, anyway). I'm driving a Honda Jazz as a learner driver, and while it's not fast, or particularly exciting (with the clutch in the crappy condition it is now, it's a complete nightmare to have to park anywhere, but, that's for another story), it is not bad either (I think, I haven't driven that many other cars yet). Anyway, my point being, manufacturers should focus more on the feeling of driving than the numbers for these top of the range cars. I'd much rather be more satisfied every time I feel the perfect gear change than feeling the wind in my face for the 10 seconds it takes to get my car up to 100km/h in the freeway..

After a full generation, nice to see a sporty version of the Yaris again. It'll be interesting to compare it to the first and second gen Yaris TS/RS