Being niche is a tricky thing to do successfully. The annual 86Fest was doing well at it, but then there was a revelation: Why not open it up to more cars?

The thought came to Antonio Alvendia, the founder of 86Fest and long-time Speedhunters associate, after he invited Global Time Attack to join last year and host an official Pro Am round at Auto Club Speedway in Fontana, California. With so many cars showing up for just GTA, he knew it was time to expand 86Fest and create MotorMassive for 2017.

I pulled double duty this year, talking on the mic for the GTA sessions and then heading down from the tower with my camera in hand to do some Speedhunting for this story. That also meant my day as started early in the morning, assisting GTA during setup where I could, and then helping drivers who were taking part in the Pro Am round and in the 86Fest and MotorMassive track day sessions.

I must say that opening the event to different cars outside the 86-ers and making MotorMassive works well especially for our coverage as we invited a few cars that we’ve covered in the past with a Speedhunters Live component that we’re keen to build on in the future.

What’s great is that Antonio and his team have continued to make this more than just a car show. This year, the event included a track day for 86Fest and MotorMassive attendees if they wanted to do more than just show off their cars. There was also the autocross set up by timing veterans JayCom Services, where drivers of all skill levels could come out and play or drift, as we saw a few of them do.

So what did I find in my travels through the event? Plenty!

No, it’s not an AE86, but I grabbed a photo of this car because I have a small history with the Nissan 200SX, both in the B14 front-wheel drive variant and the S12 rear-wheel drive model you see here. I didn’t peek to see if this was the IRS model or if it was the older solid axle version, but the turn signals tell me it’s an earlier version that could go either way. If this has or was originally a turbocharged 1.8-liter CA18ET it was IRS. If this has the 2.0-liter CA20E, it’s solid axle. Eventually, in 1987 the CA18ET was dropped in favor of the VG30E V6 and the solid axle would also disappear with all models having IRS.

Another old Nissan I got a look at was this Datsun 1900 pickup in the Motegi Wheels booth. It was not only sporting an updated set of wheels but also showing off its blacktop SR20DET swap. I bet this one would be fun to take out on track.

I got a few pictures of this Dodge Challenger SRT owned by Michael Eck, president of Challengers Unlimited here in SoCal. The Speedlogix carbon ram air hood really stood out and was what actually caught my attention in the first place. You don’t normally see a hood with a scoop like that on a road course car, but it looks like one that would be fun to drive. The ‘426’ billboarded on the sides are a reference to taking the 392ci V8 that normally comes in the SRT and stroking it out to 426ci through changing the rods, pistons, and crankshaft. It’s a huge improvement for the engine as you get a better rod-to-stroke ratio with the 4.090-inch bore.

Now, normally, a Ferrari 458 with a wide-body kit would be looked down upon because most owners wouldn’t track it. Not this guy – he drove it later in the day during the MotorMassive track outing. You must give it up for someone who isn’t afraid to take their car out on a race track, but for this guy to do it in this car was impressive. It wasn’t all that fast, but that was due to a lack of grip.

While 86Fest wasn’t standalone anymore, that didn’t mean the 86s didn’t show up in numbers. There were plenty of ZN6s and AE86s out in both show guise and track ready preparations. We even saw Michele Abbate in the Seibon booth with her GRRRacing FR-S that competes in the SCCA Majors Tour. She would also eventually take it out on track to run in the 86Fest track event for some fun runs. I’ve known Michele for almost as long as I’ve lived in California and know she’s got an amazing future ahead of her in road racing. While it’s too bad she didn’t win the chance to drive the Hoonigan Fiat 124 Abarth Rally Car, it would be weird to not see her in a Toyota/Scion.

Some of the fun things that were happening in the garages beside the Global Time Attack/86Fest/MotorMassive drivers working on their cars was watching these RC drivers drift in their own mini-street circuit. Watching them made me miss owning my own RC car, but then I remember they can also be scaled down to the same expense as owning a full-scale car or truck. That probably wouldn’t stop me from owning one, but I’ve got to get one project done before I start on another.

Speaking of action in the garage, I saw this Porsche GT3 that was part of the MotorMassive track group from GT Technik. While the name is new, it turns out the guy behind it isn’t. Fabryce Kutyba opened branches of this shop in Irvine, California and in Miami, Florida for race car prep. I might have to make a stop there soon and check it out.

While it may disappoint the diehard 86 fans that 86Fest isn’t a separate event anymore, I think overall, it’s made for a better show. Having the combination of a track day, a time attack, an autocross, and a car show that was open to all made this year’s event a major success. It had something for everyone and is the direction that will make a motorsports and automotive event that much better.

It worked for Gridlife, it worked for The Speed Ring, and now it’s worked with MotorMassive/86Fest.

So, with that thought in mind, do you think that more automotive and motorsports events need to trend this way? Should there be more than just racing or a car show and include more entertainment? I think it works out well and broadens the reach of the promoters and the horizons of the fans.

Times keep evolving, and it's guys like Antonio coming up with events that caters to a wider range of folks, will keep things going. Car life keeps progressing, and at times, even mixing it all up. We are living in some amazing times.

It's fine to open things up for more people. I'm sure 86 fans can appreciate other cars just as well. However, if every show follows this trend none will stand out. They will all be the same, except maybe a few things. So, how do you stand out then?

Jochem, they won't be all the same, every car and every event has something that stands out in it's own way. The way Justin described this event, it is something out of ordinary, something massive but not loosing any single detail. In it you can always choose to stand by the things you like most, yet you have the possibility if you decide to, to meet something yet unseen and unexpirienced. I hope promotors and sponsors will learn something from this event, and make many more of it's kind. It seems like something really worth to attend, and I'm sure you can never get bored.

Better or newer entertainment and new racing events, just to name two ways. In the end it's not just what's there but how well does the promoter do his or her job at getting the word and hype out.

All's well, but:
"It wasn’t all that fast, but that was due to a lack of grip."
And why was that?

I followed this guy for a while on the track, and eventually passed him (in my home built, V8 powered Corolla). His car was not really sliding around, so I think it was more a matter of the driver not wanting to push too hard. I'm sure his grip was compromised compared to a stock 458, because alignment settings and tire choices for show cars are not optimal for the track. It has been my experience that drivers of high end cars often don't want to push too hard. I always give props to anyone who takes their car to the track, regardless of what kind of car it is or how slow they are going. I'll bet none of the other wide body Ferraris you have seen at car shows have gone over 100mph, but I can tell you this guy was doing at least 120 on the straight. Pretty good for a show car.

Possibly just because he took a car designed by some of the best automotive engineers in the world and changed stuff.

Those top three could be reasons, for sure. However, "best automotive engineers in the world and changed stuff" is a bit subjective. They make a car a good road car that's expected of Ferrari, but that doesn't mean they built a car that's perfect for every condition or track. That's not to say you can't make a Ferrari worse, but I would argue (and, again, I see the irony in me saying this) that someone could make one better but not better for every situation, even a Ferrari engineer.

You are absolutely right.

The stock car is a road car that has to cover lots of situations. Nevertheless, the stock car has had hundreds (thousands?) of testing hours by professional engineers and drivers. You have to be pretty special to match them. It would be normal to make the car slower when you change the setup. 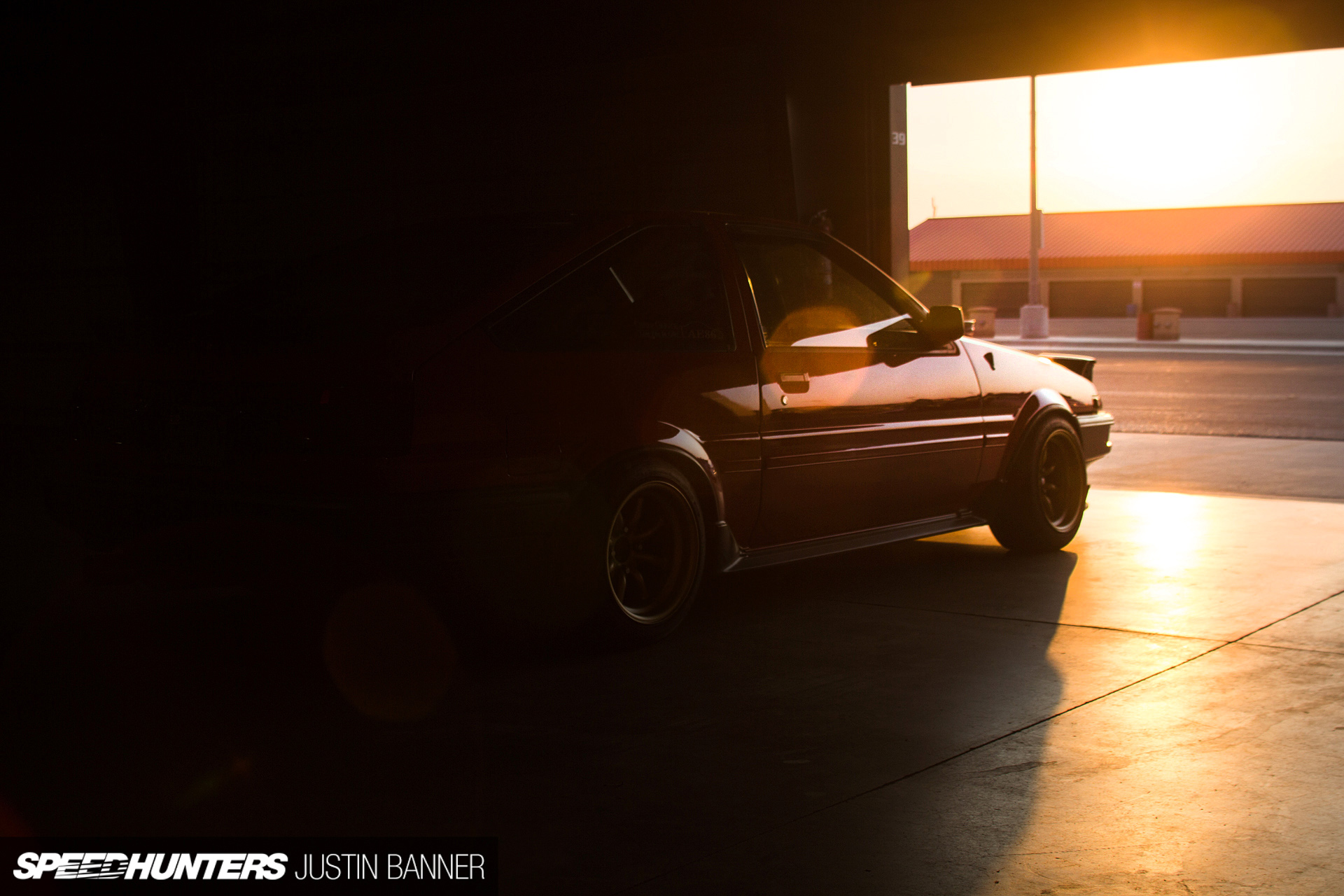 Wow, you want one of my pictures? I'm honored.

It is a good one though!

He could have if he entered into Motor Massive, though I don't remember seeing him from the tower.

The guy that was participating in the Motor Massive portion of the event.

That's why it was also called Motor Massive.

Did you show up early in the morning or after the show ended? It was far from dead.

If you really stuck around to the afternoon, you would have seen that the two garages open to the event participants were filled up, the autocross and GTA round were both sold out, and the parking lots between the garages were filled out. Hardly dead.