If it does, it’s because it’s already been featured on Speedhunters before.

It was nearly five years ago that I first paid a visit to Maidstone Sports Cars in Kent, England and pointed my camera in the direction of Adrian Hall’s Ford Escort MkII. Five years is a long time, but it’s far less than a quarter of the time that Adrian has owned the car. By my rough estimate, it’s been in his possession for over a quarter of a century.

The Escort gone through some radical changes over the years, but this might just be the best it has ever been. When I last shot this car, it featured a naturally aspirated, 280hp HT Racing Cosworth YB with an 8,500rpm rev limiter. His next move though, surprised even me.

Long gone is the Ford motor, and in its place a (rumoured) 400+hp Honda F20C from an S2000, complete with a considerably sized turbocharger mounted low on its side. I would have loved to have seen the look on the Ford purists faces who idolised this car with the YB, when they discovered what now rested in the engine bay. I wonder if Adrian has been ex-communicated? It’s okay, he’s welcome to come and join us.

The Escort’s aero package has increased considerably too, with a revised front splitter, a larger rear diffuser and a side skirt system developed with the aim of sucking the car to the ground on track. It has a new livery as well, but it’s the parachute out back that seals the deal for me.

The louvered rear window is another addition to the car.

The 13-inch (rear) and 11-inch (front) wide Compomotive wheels appear to have been retained, something few will disagree with.

It’s such an incredible car, and it still remains one of my all-time favorite MkII Escorts as it’s the total package. If you’re curious about the RS2000 beside it, you can read about Jamie Gough’s car from a more recent feature by Jonathan and Peter.

With Adrian’s car apparently being permanently on track at Players Classic last weekend, I couldn’t catch him for the details of the upgrades, but there’s an upside to that. It means I have an excuse to go and look at the car again, and that can only be a good thing. 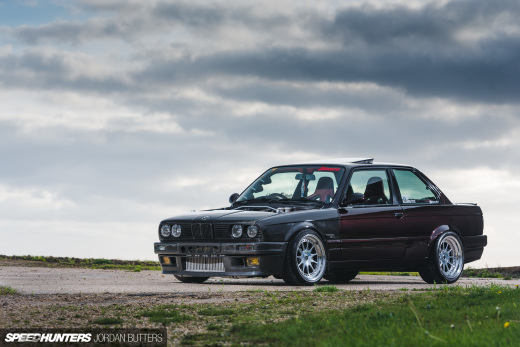 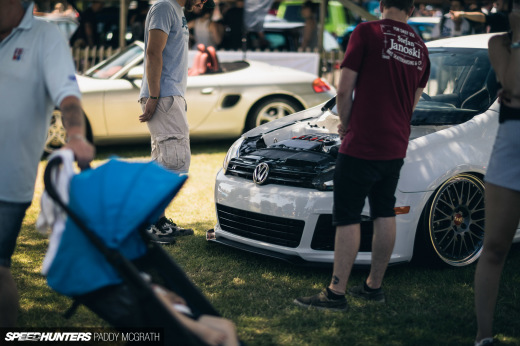 Is this camo wrap on here done by cutting individual vinyl pieces to size and shape and placing them on the car like a puzzle? It does look like it to me, or can you buy the vinyl pre cut like this? Really like the look, especially on this car.

AFAIK you can buy the vinyl with all the shapes cut out already.

Think of camo wraps - they come off rolls

Honestly, I can't recall. I would think it was individual pieces.

Was It really 5 years ago? Damn time flies.

This is sick! Any videos of it hauling ass?

Nothing recent with the new turbo motor.

well...turns out i have been following this page far longer than i realised.
Charles Kha wrote the article about chasing the perfect Altezza. I've been here since then late 2011...still my favorite article

This swap (or a similar one, it's unspecific) is available for lots of the classic cars, like this one, in Forza Horizon 3, and is always a fun choice, so I'm right behind this car. Still.

I wish ford would have given us this car and the ford maverick. Funny cause I was thinking about how cool it would be to drive a Maverick or a Cortina or a MKII Escort here in the states now that those cars are over the 25yr mark. But I asked myself "why do I love these cars so much?" Is it because we never got them and they are cool looking OR is it simply because they look awesome? Anyone wanna take a crack at my thoughts?

We have LOTS of Ford mavericks in the states, and at very affordable prices. Maybe look around a little on Craigslist? You can always ship a car that old from Europe no problem.. sadly escorts are outrageous in price due to Europeans scrapping so many. I'm not sure what cortinas go for but they are around and it's only a couple K to get them over here