Last week I headed over to Nagano to meet with the Garage Mak folks on some Need for Speed-related business, something that will make the franchise’s next game even more special. It’s been quite a while since I visited the Miyagawa brothers, and that last time I shot a couple of wild Nissan S15s they built back in the day. In the years since they’ve made a move to the Z33 platform and have become real specialists with the VQ engine.

But on arrival at the shop, it was the black JZA80 parked out front that flooded me with a wave of memories and emotions.

It’s been so long since I’ve seen a Supra sporting the Zefi:r body conversion from Abflug, an opinion-dividing aero kit which replaces pretty much every single panel on the car’s exterior.

The boost in width is quite substantial, and you might even wonder if the Supra even needed that in the first place.

That said, the kit does all sorts of wonderful things to the Supra’s presence and it’s virtually impossible not to be drawn to it.

Especially at the rear, where the girth is even more exaggerated. The Weds Kranze LXZs wheel are something you’d more likely see attached to a slammed VIP sedan running double-digit negative camber, but somehow the more ‘dress up’ nature of the whole Abflug kit makes them a good fit here.

The whole Zefi:r design is based around the front fender outlets and the rear fender intakes, which visually create a sort of Z pattern across the side profile of the car.

After half a decade of overfender everything, I found it quite refreshing to see some integrated blistered fenders.

The extended rear bumper and tight-fitting diffuser requires the exhaust tips to be extended, and in the case of this car, angled upwards with a split to twin outlets.

It was great to be able to look over this car, but it also made me wonder about the JZA80 in Japan these days. It’s very rare to see one out in the wild, and when I have seen them they haven’t had much done to them. Traction issues scaring potential owners off? They just don’t have the look any more? The first may be an issue for sure but not the latter; I for one think the 80 series is getting prettier by the day. Am I alone in that thinking?

Brütal! Can i have this please?

Where'd you get a keyboard that'll do umlauts? I want one!

The benefits of being hungarian.

Güd! This last Supra is THE perfect japanese sportscar. Beautiful lines, strong and reliable drivetrain and that engine.

What a beautiful kit! Prefer this wild look anyday

I think the Supra community primarily thinks bodykits are a thing of the past. I sort of agree, however it is refreshing to see one so overly done as this. And I mean overly done in the best meaning of the phrase. Also, with prices skyrocketing the last 5 years any irreversible modification is uncommon really.

I hope this makes sense, english isn't my first language

I think the JZA80's always look better in person apposed to a photo.

There's a guy that parks his white NA close to my place. I eye it every time and think what I'd do with it if I had to build one up

Bro, there is a Black JZA80 down the street from work, that I have to force my eyes away from, when I drive by.
F&F 1 jacked the prices on these cars so bad, it makes me cry each time I see it.
I can get a TT Z32 for 5-8K and its the same year supras are in the 20-30k stock.

This kit still looks way better than any other trendy bolt-on over-fender stuff, even now.
BTW, the number plate matches the car very well too...

Yeah was waiting to see if anyone would spot that lol

Maybe is the total lack of parts and their prices that discourage potential owners, I'm pretty desperate in this moment, trying to find transmission parts that costs less than an apartment.
Anyway even if owning this car in the totally wrong country it's been ( and will be) one pain in the ass I still fall in love every time I see that damn thing.

I know that feeling. Even though I have officially given up my hopes of ever owning one, I still dream about it every time I go to youtube or Speedhunters and a Supra pops up

I am not sure how I feel about the looks on these cars. I have always thought of them as an amazing heart in a slightly overweight body, albeit one that it looks reasonable in.

The kit does all sorts of wonderful things to the Supra’s presence and it’s virtually impossible not to be drawn to it.

Wonderful things? Honestly, can't join you on that one Dino. However, I think everyone is drawn to it. Whether you like the over the top styling or not because every JZA80 Supra is a sight to behold, even one with such an impressive kit. Is it better then overfenders? Not sure, since overfenders are overrated and overused. Lets say that this is refreshing. Just a bit too much plasticy tuned looking for my taste.

JZa80 has a timeless design. The kit is very extensive but interesting.

Very curious about the GarageMak NFS thing though haha

I have a feeling about that....and it's coming really fast

Less stance and more of this please.

Not sure why people seem to think you're calling this stance. Clearly haven't read your comment very carefully at all.

Someone doesn't know what stance is...

How is this stance?
The tires sit inside the wheel housing with neutral chamber, usable suspension travel, decent ground clearance, properly moulded kit etc.
Homologated as the AB-Flug (spelled right) S900... claiming stance on this is like claiming that RUF Porsches are stanced.

Allow me to direct you to this article by Paddy: http://www.speedhunters.com/2016/05/were-taking-stance-back/

Tried to reply, but it doesn't show up. So my apologizes if this turns out as spam..

I don't agree with that article; I do agree with its sentiment, but at this time the term "stance" is so well established for a very certain type of builds - up to the point where I don't even have to elaborate on which type of builds this is, because you all already know of which I refer to.

PS: I was wrong about the spelling, checked their webpage and it is indeed just "Abflug". My bad.

You need to try hard to make a Supra looks ugly, maybe with a black housing headlights and side exhausts ... these headlights mask and quad exhaust tips kills it.

Shut up and take my money!!

Strangely appealing. Not even much of a Supra fan, but this is so different from everything else you see these days it's quite refreshing.

Enjoying the regularity of Spotlights on Speedhunters at the moment too. Can't just be my imagination that we're seeing more - and even if it is, I appreciate the extra effort to post them.

And people think overfenders are bad!? Lmao this thing is disgusting looking. Well done as far as install and paint but that kit looks dogshit. Nice wheels though

The best body kit in all time.
At Tokyo Xtreme Racer and classic Forza Motorsport Abflug Supra has always been the best for me.

man I havent seen anyone mention tokyo extreme racer in so long, I love that series so much...I wish I could find a copy of zero and a cheap ps2 again. The boss battles were so cool.

rest assured. I'm looking at Supra's body kit almost.
I understand that some people like simple body kits.
But I prefer extremism like Abflug or Veilside.

lol the expression on this car looks like he's either high or drunk.

I guess they are so rare on the streets of Japan since they are all exported (to Norway? :D) Last year on a one month trip to Japan i managed to see two (!!) JZA80´s in thw "wild".

This is pure sex, the opening shot is so good

As soon as i saw the first pic my mind just said no,no,no....over and over again

Not feeling this at all.

Clean up those yellow'd headlights dammit!

Is that front bumper authentic? I remember the kit sort had a twisted/slanted look with the lines around the headlights. This one looks a little more subtle.

Abflug had two similar kits for the Supra, the S900 and the Zefir. It's the S900 that has the closed in headlights as well as a few other differences.

The mirrors and wheels dont really suit the car, put some stock mirrors or ganador ones and some motorsport wheel with meaty tire and it would look so much better.

Hey Dino... it's unrelated to this article, but I figured you would probably have the best answer.

What happened to the weekly "Video Roundup"/"What we've been watching" that I used to very much look forward to on Sundays??

I always prefer the molded wide conversion to a bolt on even if some of bolt on over fenders looks great, even if it's more practical for track oriented cars i see it as a shortcut.
And sure it's time to think about making 3jz and fit it in a new supra.

I get a lot of comments from back home (Florida USA) on inquires on these Supras. Informing them that a clean RZ 6sp can be had from here (Japan) for $17000-$23000 based on current exchange rate blows their minds. On a different note we have a Abflug Supra here in Okinawa

This beautiful black car is made in Abflug same as my car.

I think Abflug kit (supra,fd,300zx for example) is designed for one true purpose only.. how 300 km/h car supposed to look like at wangan 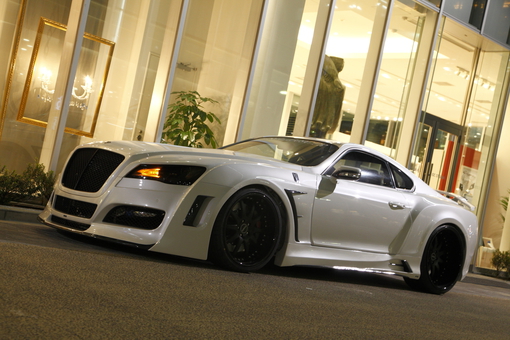 You're probably seeing less of these in Japan, and other JDM monsters, because they're being import to North America by the thousands.

I was never really feeling that bodykit back when it was new but something about the details of this one really sets it off. plus I love those Kranzes on pretty much anything.