Over the past few days in the lead up to the 2017 New York International Auto Show, the rumour mill has been running red hot in regards to the performance specification of the 2018 Dodge Challenger SRT Demon, specifically its official power output.

If the rumour mill was to be believed, then Dodge had cooked up a 1023hp beast able to devour the quarter-mile in the mid-9-second ET zone.

Well, at least one of those predictions was correct, but either way, the Demon wholeheartedly lives up to its name.

At this morning’s press event in New York, Dodge – with the help of Fast and the Furious franchise star Vin Diesel – pulled the wraps off a car that makes the Hellcat look a little, well… soft.

At the heart of the Demon is the highest horsepower production V8 engine ever produced – a supercharged 6.2-liter HEMI Demon V8 good for 840hp and 770lb-ft of torque with 14.5psi of boost stuffed in it.

In the real world this adds up to a car that can go 0-30mph in 1.0-second, 0-60mph in 2.3-seconds, 0-100mph in 5.1-seconds, and run the 1320ft in 9.65-seconds at 140mph. In case you’re wondering, the latter makes the Dodge Challenger SRT Demon the world’s fastest quarter-mile production car; its performance was certified by the National Hot Rod Association (NHRA), who then banned it.

In an era when many automakers are striving to make production vehicles as fuel efficient and vanilla as possible, it’s amazing to see Dodge take American muscle car performance to never-before-seen heights with something as wild as this.

We can’t wait for a drive, but in the meantime, check out the official launch video and full press conference broadcast above for more on this beast. 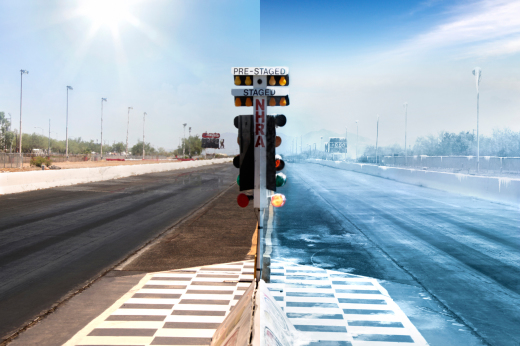 Not gunna lie, I may be a detailer at a dealership, but I am DAMN PROUD of the cars we make at Dodge! Having driven a red key Hellcat and a Maserati at 17 years old I hope to God someone orders a Demon here. Then I hope I get to clean it and fill it up with gas!

Does it come with a prepaid funeral plan for owners without competition licenses ?

I doubt Mustang drivers would be making the switch here.

have you herd of the super snake?

NOW THATS WHAT I LIKE TO SEE!!! A BIG MIDDLE FINGER TO THE MAINSTREAM PRODUCTION CAR!!! GOOD FOR YOU DODGE YOU HAVE EVERY RIGHT TO BE PROUD!!!

omg they had me at 'wheelie' hnnnnggggg

Just look at those wheels! How many oem wheels are low offset & concave like that?? Good job Dodge.

The cynical part of me believes that Dodge is tacitly admitting the Challenger chassis is no good at corners (at least in comparison to the Mustang and Camaro).

So is this a middle finger to the impending autonomous beige singularity or is this computers doing the driving on a drag car? I'm torn between "9's!Hell yeah!" and "Great, now checkbook pedal mashers can go 9's with zero effort."

So will this be street legal, or is a competition only car like what Chev did with the COPO camaro?

street legal, Dodge has the Drag Pak that competes with the Copo Camaro

Dodge, seriously, you f#$%ing rock! This is the type of stuff enthusiasts want to see. Hopefully lots of other manufacturers will learn from this! Amazing!

very true its for our future generations to still enjoy what cars are made for.

I wonder if I could get one shipped to Sydney!?

X2 to Sydney thanks! Those wheel specs, that wheelie...

Still not entirely sure why the NHRA banned it. Too fast without a cage I am guessing?

Either way Dodge hit a homerun with this one. I'm going to hazard a guess right now and say in 30 years pristine copies of this car will draw huge numbers at auction.

The NHRA banned it because any car that runs a 9.99 or quicker or 135 MPH or faster, needs to have a roll cage in it and they would need a competition license. They didn't include a roll cage for crash testing reasons as they would probably need to re-engineer the car and put tons of R&D into make it pass the tests.
But I imagine that the ones who buy this car and actually drag race it, will have no problem installing a cage in it.

I'm almost disgusted by this thing. Why would you want a 9-second car without a roll cage at least built in behind the pillars? It's like now we're just waiting to hear of the Demon's first kill.

You do realize that the manufacturer probably can't install a cage in the car without making it for "off-road use only" aka the Track Pak that's already produce. My guess is people who are buying this to run at a track will install a cage.

"Waiting to hear of the Demon's first kill."

No joke. It really is an appropriately named car though isn't it.

Larry, can you arrange one as a press car for us at an FD event this year? Maybe after Irwindale, so when we die, all our work will be submitted already.

You bastards. If you get one, I want to see tyres explode from too many burnouts!

Finally, a car that has earned its name.

I wonder if they did those times on factory tyres. Either way, I'm officially now a huge muscle car fan. Go DODGE!!

It comes from the factory with a Radial tyre.

It comes from an optional drag radial that's is DOT street legal... The tire which this time was recorded on. NT05R

I'm finding this seriously funny, after how many Mopar fanboys where outraged at the Liberty Walk overfenders on regular challengers!

Because this just doesn't resemble a LW kit at all?

Seriously though. Did they simply bolt on a bigger supercharger, and get a few kits from Miura?

I appreciate the guy's passion and dedication to car modification, but attributing every car that's ever had fender flares and a front lip to being inspired by him is a bit much.

I thought the same thing when I saw those fenders. I kinda' like the Demon, though.

DODGE!!! When will you come to Australia??

Especially now with the locally Holden and HSV line up disappearing.

Marvelous! Dino show this article to Mazda or other Jap technicals...

I understand NHRA rules require a roll-cage and competition driver's licence for any vehicle running 9.99 or quicker over the 1/4. And the trap speed of 140mph is only 10mph away from requiring a parachute too ...!

Just fantastic that Dodge is making this thing!

Tech inspection is why you'll never see the end of street racing.

I love that the supercharger capacity is a full superbike's worth of CCs bigger than my Volvo turbo motor. In fact it's almost the same size as the TD engine in my Range Rover. That's ridiculous, fine work Dodge. Fine, fine work.

What's the price tag on this one? I wonder if the engine can compete pricewise with a modified lsx in the drift game..

Dodge actually did something right with this. I actually now want to own an American car more than an import. Good job Dodge! Gorgeous car.

Most powerful production V8 engine ever?? What happened to the 1140hp Koenigsegg V8?

If you are outside of America, you are off the planet .. sorry..

10(?) cars a year isn't considered to be enough to be classed as a production car.

25 is the number to be considered production car and Koenigsegg will build 25 Agera RS. All are sold.

I don't think all 25 are being built from start to completion in the span of 12 months.

All 25 (which as far as I know is the requirement to be considered a production car) Agera RS that are suppose to be built are sold. I don't know how many have been built as of today but I guess that the Dodge Demon doesn't exist in 25 examples either right now.

" 25 identical cars produced within a 12-month period" if they sell 25 that doesn't make them a production car unless they make them within the 1 year time frame.

Speaking as an owner of a super charged 2001 mustang cobra, I find it amusing that other mustang owners who stuggle to run 11 second ET's and build cars that exceed 600hp insist that that the only way to go fast is to rip out the catalytic converters and other emission equipment and creature comforts like ac and sound systems, etc thus turning a street car into a rolling torture chamber.
At the same time, cars that come right from the factory with tons of power and performance( 2013 gt500, dodge hell cat and now the demon) offer greater power and performance and comfort with ac , stereo, nice ride, emmision compliance and a factory warranty while at the same time out powering and outrunning that polluting and smellly mustang.
We are living in the golden age of performance cars. No question about it.

Not so true in this case, the Demon is 215 pounds lighter than a Hellcat because it doesn't have those things...

I wonder if that quarter mile time was done with everything on the car? If you watch closely at the edits, the car that was launched had skinny front tires and rims.

It comes from the factory with a goody box of track day essentials that includes a set of skinnies for the front so that's still factory trim.

I love this. ALL of this! Can't wait to see how much the Camaro and Mustang boys are shaking and preparing their excuses.

Is it badass, of course it is. Dodge went out there and showed they want to be a player in the street strip game...Ivebeen told the car is in the 130k range..IDK if you drag race, but you can build a lot of car for that money, be as comfortable in the new Demon and have money left...The difference is the warranty and the limited number of Demons that will be built.

Dodge you son of a.... You done it!
Been expecting a car like this and had a good feeling it would be from Dodge. Good on 'em.

I feel ashamed for talking shit about Dodge and Hellcat. I have to admit that this Demon has occupied a special place in my heart. As an engineering fan and a hardcore car lover it is impossible not to love this monster. It is amazing! When I saw the first video posted in this story I just wanted to clap my hands and reverence the whole team of engineers behind this project. I congratulate them.

This thing's a tent revival on wheels!

Somebody needs to buy one and put an American flag decal on the roof, General Lee style.

They wouldn't have needed all that extra power if they shed some weight off of that massive car. Typical American style engineering, "we don't want to put the effort in to shed weight so lets put an even more powerful engine in it."

Wait doesn't the Agera have 940 hp and the RS 1160 hp? unless they aren't counted as production cars then this ad campaign is trash.