I distinctly remember the first time that I saw pictures of a Liberty Walk Ferrari 458.

At that moment it absolutely blew me away, and I still get vague reminders of that feeling nearly three and a half years later when I revisit the article. It also took me this long to see one in person for the first time, but there’s probably few better examples than this.

The best part is that when I woke up that morning, I had no idea of the joys that were awaiting me at AutoCon in FD Long Beach. Before the gates opened to the public, I was enjoying what felt like my own personal car show. While I was hilariously short on time that morning, there were a couple of cars that stood out for me.

You might have already seen the JZX100-fronted Cressida I posted up yesterday, but the next car I want to share was at the complete opposite side of the car culture spectrum.

A lot has been said about the overfender movement, but I’m not going to add to that today, except to say that each car should be judged on its individual merits, rather than a blanket love or hate attitude.

I’ve often seen it written in the comments here and on social media that the kits would look much better if they were fully blended in. I don’t necessarily agree with that sentiment as I think doing so would kind of miss the point of the design, but when I came across this 458 Italia at AutoCon, I thought it was a pretty good example of a compromise between both ideologies.

The kit has been subtly modified to remove the recesses for the hardware before being bonded and sealed to the car. Retaining the step between the overfenders and original bodywork is an important decision, I feel. It’s the line that gives the kit shape and without it, I think it would just look odd.

Overall, the car is well finished. That might seem like a strange statement, but regardless of whether it’s a Ferrari or Fiat, sufficient detail needs to have been applied to the whole build to carry something like this off. Here it comes in the form of the subtle body-coloured roll-cage, the aftermarket Fi Exhaust sytem, and how it sits on its AL13 wheels and Air Lift Performance suspension setup. Then there’s the paint colour, which seems to shift from pearl to satin and to countless different hues depending on how your look at it and how the sun hits it.

If you’re going to wait three years to see your first LW 458, you could probably do a lot worse than this. Now, I need to try and figure out how I can get someone to let me drive one.

See, I think that looks a bit weird. It's almost like with the rivets exposed there's no secret that these are bolt-on fenders are inspired by race cars with their exposed hardware. With the bolts and gaps smoothed but the steps left it doesn't work for me.
I almost want to see what it'd look like either fully smoothed, steps and all, or with the bolts smoothed but the panel joins left.

Yeah I feel like it would look better either blended smooth or just completely exposed. This is in the middle and the lines where the overfumblers meet the body are very - distracting? Have 20 internets, Jordan.

You've been brainwashed by the sea of bolt on flares, now wide looks wrong without hardware to many of us.

I for one think it's extremely difficult to make a 458 look bad. The kit wouldn't necessarily be my cup of tea, but then you take in the colour, and the finish, and the front looks with those headlights... and if you get a drive Paddy I call shotgun

458s look so bad slammed to the pavement.

It's on air, so it could be three for three?

I like the smoothed rivets, but you guys have featured a few LB458s already. I was hoping for a spotlight on the F430, those wheels look killer!
Cheers.

In hindsight, I should have shot both but I was already running late at this point. The 430 looked good though!

Not sure how a molded fenders would look odd. Most, if not all, 458 GT2, GT3, and Grand Am models had molded fenders. Did they look odd?

Rears on a 458 GT3 are riveted, but it's a fair point. I think it works on those because it's a full wide body where the front bumper and front fenders are almost single piece. It's definitely a different style, albeit a subtle difference.

Looks better blended in, more people should do this.

What is a "Road Warrior"?

Google-Images "R's Tuning BRZ" and a white car with a fully-blended Rocket Bunny kit will pop up. Looks incredible. Anything less and my eyes keep returning to the outer lines of the kit, and I can't enjoy the car as a whole.

That looks much better than I expected.

Wow that does look good. Infinitely more at home looking on the car, and somehow, makes the car look even wider than just a regular RBunny kit.

I like the idea and attempt, not so keen on the look. I think it's kind of... heavy looking? I'm having a hard time putting my finger on why those flares look so odd where they join to the body. Either the edge isn't hard enough, or not smooth enough (I just can't make up my mind!).

Would really like to stop seeing cheap looking wings on these things too.... Who are you kidding with bare carbon fiber? It doesn't matter how light that thing is when you have 458 power, you might as well put some paint on it so the edges don't look so roughly hewn.

I bet you'll cringe when I tell you that wing costs over $13,000. I know right WHAT THE FUCK!?!? Ferrari tax I guess. It's made by Super Veloce Racing if your interested.

Personally nothing here works for me at all, the 458 is a beautiful machine already and this....stuff definitely does not make it moreso. LESS so...

Out of widebody stylists out there Rocket Bunny brings out an exciting and creative energy to his designs. For me the others are just starting to look like pasties. I especially like the Silvia and FD3S Rocket Bunny projects.

Saw it at the show, quite a stunner along with the Porsche. Coincidentally, it was next to me on Pine Ave right after the show, driving out like us. Watching it roll in the wild is not something I'll likely forget soon. I snapped a crap pic of it next to a city bus, it looked silly low

In all my years, I've only ever seen one LBW or RB kitted car in the wild which was a GT-R outside London. It looked incredible amongst appliances. 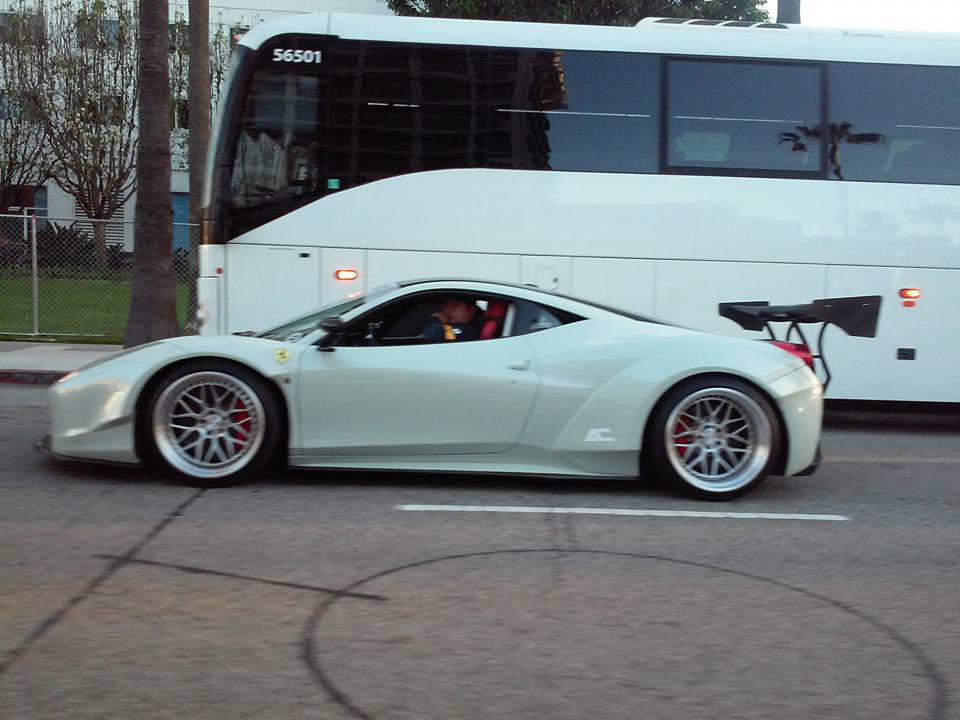 Personally I'd prefer a duck bill to chassis mount here. Sticks out like a sore thumb to me.

A sleek car like a 458 SHOULD have a big wing, and indeed looks sorta naked without one.

Just not with these pylons. Too many wings these days look like they were designed to plug into a trailer hitch receiver.

Totally agree a duckbill looks best in most cases, unless the car is a competition clone or...well, the 458 actually does support that wing IMO as well but I prefer the less obvious.
Of all of the bolton kit guys out there, I think the Rocket Bunny duckbill is probably the only piece I think I'd own if I got a chance. Oh, and I do have tasteful Powertrix and TwinZ cf bits on, waiting to be installed and planned for my Z32 but they are/will be installed correctly to the car, with no cut panels or exposed rivets, etc.

JESUS CHRIST look at the top part of the hole in the rear bumper for the left hand side mount of the chassis bumper!!! It's still a Ferrari and not a drift car no matter what, I would be SO MAD at that if I was the owner. I guess that is a perfect example of the reality behind these sensational internet cars...unless it's Kato's shop that fits these kits, these are the realities and dangers...I think that is appalling and certain standards should automatically be upheld if you're choosing a Ferrari as a bad...you wouldn't go below OEM standard on a clean build on a Japanese car right?

I cannot see what you are referring to.

A) Apologies if I am overlooking it.

B) If it isn't there and you just made me look for something that doesn't exist, then top trolling, well done! [richardattenboroughslowclap.gif]

As a *base* not bad, whoops