The Corolla before you wasn’t the rarest, most expensive, fastest, lowest nor wildest car in attendance at the JCCA New Year Meeting in Tokyo. Nonetheless, it was a car that I knew I had to spotlight as soon as I laid eyes upon it.

What started life as a humble Toyota Corolla Levin – chassis code TE27 – has been tweaked and tuned over the decades to represent, in my eyes, absolute kaizo-sha perfection.

The golden hue is what initially drew me in for a closer look. As you can see, it vibrantly popped out from the surrounding cars as the sun poked through the cloud cover and activated the metallic fleck. I’ve always thought that factory colours are best, but I’m very happy to be proven wrong in this case.

The compact Levin oozes character. From the aggressive, circuit-ready stance to an appropriately vintage SEV Marchal headlight cover, the owner clearly knows a thing or two about building a legit retro Japanese racer.

Speaking of stance, a set of rare and valuable 13-inch Tosco (later known as Toyota Racing Development) racing wheels sit under each overfender. These are top-tier shoes for hardcore Toyota guys, and instantly give a car plenty of credibility amongst the demanding JCCA crowd.

Like the rest of the TE27, the engine bay was immaculately presented. Framed by a matte black respray of the bay walls, the 2T-G looked simply amazing. These 1600cc inline fours helped put Toyota on the map as a serious engine maker back in the ’70s, and laid the foundations for the better known 4A-GE come the 1980s. Toyota’s 2T-G-equipped racers could outrun the Skylines and Fairladys of the day and were a tuner’s dream – easily bored and stroked out to 2.0L and with a slew of go-fast bits available from TRD via the Toyota network.

Upgraded carbs and beautiful equal-length headers liberate a few more horses as well as ensuring the car sounds as tough as it looks. I’m looking for something I’d change about this car if I owned it, but no luck yet!

The interior was a fairly typical, simple affair. Changes from factory included period racing buckets and a leather-wrapped steering wheel as well as updated gauges. Still plenty friendly for the street.

Since the boot was left ajar, I figured it was worth a quick stickybeak. And look – another Tosco wheel in the spare wheel well. Expensive cargo, so I guess it’s worth showing off.

Its well-selected modifications and custom flair cemented the TE27 as one of the highlights within the JCCA show. But what do you think? Let me know your thoughts in the (new and improved) comments section below! 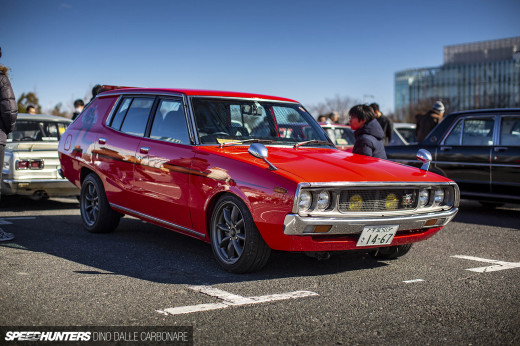 @Blake I do love it especially that it still runs the 2T-G motor but the TE27 on the left(from the front) looks waaay sexier any more pics on that one?

Way above your average Corolla. This one has been well taken care of.

How can I get these in widescreen resolutions to use as a wallpaper? Fantastic imagery of a wonderful machine!

Those wheels are beautiful, like the rest of the car

Have a 74 . Cool little cars. Going more in a new old direction with mine .
Has a 3tc (the hemi) motor bored out ,custom head ,etc.
Modern electronics (race pak) and will be setup for road racing /street crusing.

Car of the Year material IMHO. Just perfect. Only problem is no good 'asschots'!

Is the key a screw driver?
The only thing I would change (and it was something that I thought something on this level would have done) is re-routed the plug leads. They kind of stick out like a sore thumb on an incredibly clean engine bay like that. Just my opinion. Other than that, its an incredible car.

Its a Japanese thing....they glue a key into a screwdriver handle.

is that a swirl pot in the boot, looks like a very nice setup. hard lines and all.
the colour on those side/fender mirrors are beautiful

This is some proper JNCing happening! I'd give this car a sold 10/10

I have a set of SEV Marchall's in a Golf 2 Grill I have laying around, if someone wants them shoot me an email.

Seeing 2T-G in Japan is like seeing Volvo B230 Turbo in northern Europe and 60's Chrysler Hemi engine in USA. Nothing special.