Being one of the largest and longest-running indoor car events in the United States, the prevailing image of the Grand National Roadster Show is one of immaculate custom vehicles gleaming under the lights.

There’s more to the GNRS than that though, and one of the coolest aspects of the event is the outdoor cruise-in that happens on Saturday and Sunday.

Here you’ll find everything from past GNRS ‘America’s Most Beautiful Roadster’ winners to low-buck daily drivers, and this year it’s where I came across a super-cool 1952 Chevy Thriftmaster pickup owned by Charlie Hall.

The body of the pickup showed plenty of age and wears its oxidation with pride, but aside from that, every other part of the Chevy has been drastically modified.

One of the first things you notice is the ride height, or lack thereof. The vintage body is sitting on a heavily-customized chassis with air bags all around controlled by an AccuAir e-Level system.

Filling out the fat fenders are a set of Boyds five-spoke wheels, which provide sufficient clearance for the big Wilwood disc brakes all around.

Under the hood sits an LS V8, which is not too surprising. What is unique though is the truck’s radical exhaust system.

Rather than opting for an off-the-shelf exhaust setup, these custom-built headers are routed upward and then behind the engine before exiting through a side dump in the rear passenger-side fender. Not surprisingly, everyone who looked in the engine bay did a double take when they saw the pipe work. The fabrication is simply beautiful.

The interior of the truck, meanwhile, has been fully overhauled with very attractive tan leather upholstery and digital gauges, and I especially like the ‘Stop’ and ‘Go’ markings on the brake and gas pedals.

While it’s the indoor portion of the GNRS that’s the biggest draw, you never know what kind of cool stuff you’ll find outside, and this customized hauler is easily one of my top picks from the 2017 event.

Love it!!! bring on the patina'd shop trucks

That exhaust! So cool!

is that an 8-1 collector? Does it have that sick high pitched sound that the D1 passat has? Soundclips or GTFO lol

8 into 1 yes. Headers and valvecovers made by @branchengineering on Instagram

Word. I really wanted him to fire this thing up!

Louvered hood is slick, as is the hard upper rad hose, and of course the aforementioned headers. 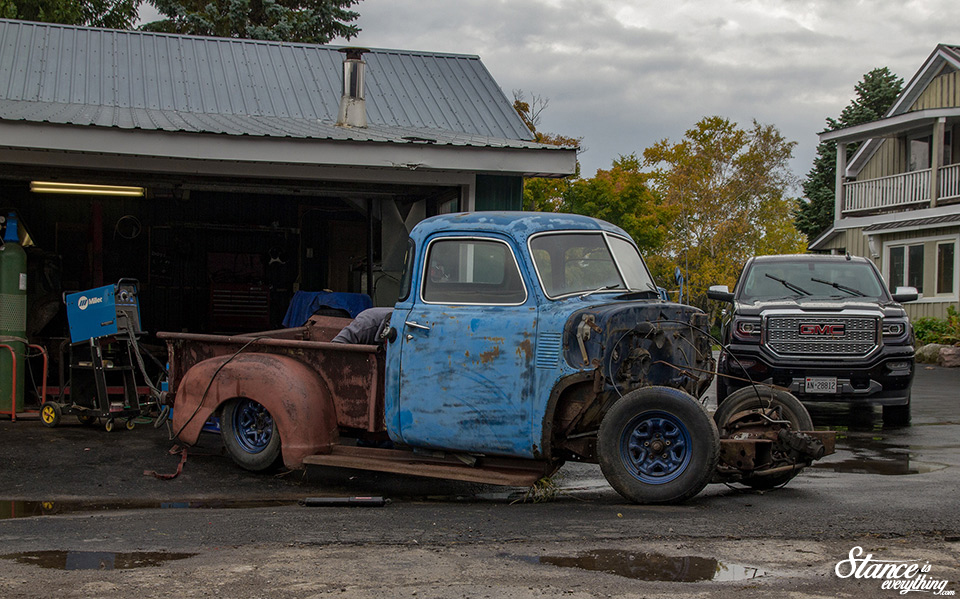 While it's very cool, those header aren't unique, they're Cross-Over Headers. Used on thousands of dirt late models all over stockcar racing. Not that I've ever seen them used on a street car.

Sweet truck! Only issue I have is that since they went with that cool fabbed exhaust Its a shame they didnt try a 180 degree manifold. They clearly have the space and the skills. The sound would have really set the truck apart.

those wheels just look so good on this build, really liking this truck...
is there a reason for those headers (performance gains)? or just to be different?

On circle track cars the main reason is to remove all exhaust clearance issues under the car. Not only the headers but the whole exhaust (on a racecar anyway) are routed through the passenger side seating area (enclosed) and then dumped out the door skin. Very neat and tidy from the outside.