Tokyo is quite the place for running into rare cars. It doesn’t really matter the time of year either; provided you hit up some strategic places, you can be sure to see all manner of mind-blowing machines, from your older collectables to the latest and greatest hypercars.

Strangely enough though, what you don’t see a lot of in the center of the capital are Japanese sports cars. It’s all due to the simple fact that in order to fit into the buzzing metropolis you most definitely need something foreign, possibly limited edition and as expensive as hell.

But then again, isn’t that the same story in any big city around the world? At least what I can say about the Japanese is that they love to drive their cars, no matter how rare they are. And that makes Tokyo one of the greatest cities in the world to head out and do a spot of random Speedhunting in; precisely what I did on Sunday. I was just out taking a cruise through the city with my little Speedhunter in tow when I came across an unusual line up of cars in the hip area of Hiroo…

Thankfully, I had my camera with me – as one should always have – so I pulled up in front of the McLaren P1 and proceeded to grab some picture.

This isn’t the first time we’ve see this dark purple P1; the car was up until recently owned by Kimura-san of Car Guy, the guy that likes to go camping with his F40, and in the winter, stick some chains on it and head up to Nagano for a bit of snow driving.

He had his fun with the car but has moved on, recently picking up a Lamborghini Aventador SV.

One that looks exactly like this car in fact, but in yellow. I later found out that these guys had just spent the day up at the Hakone Turnpike as guests of a Honda NSX club who’d had a big gathering.

Aside from the fact that I wish I had heard about that event, I was at least content with this colorful selection of cars in the city.

It certainly made what I thought would be an uneventful Sunday afternoon the complete opposite.

Right behind the SV was a GT3 RS version of the Porsche 997, which looked mighty compact and narrow in comparison to the new 991 Carrera 4S I had been driving earlier in the week.

It’s funny how up until the end of last year everyone was moaning that the GT3 had forever lost its manual transmission – this 997 along with the limited edition 4.0 version billed as the final cars to have a DIY shifting arrangement.

But Porsche being Porsche has listened and given us the 911R. Yes, it’s a very limited and expensive model, but albeit one that people wanted. I think the 997 still manages to look so right, even when compared to the blisteringly quick, but massive new 991s.

Kimura’s ride on the day was actually his trusted AMG G63 6×6, the most bonkers version of the Geländewagen that money can buy. That is, unless you’re talking about the Brabus version, which is even more opulent.

Still, it’s precisely what you need to navigate narrow Tokyo backstreets. I can’t even imagine what it must be like to drive around the city with this monstrosity; it’s probably one of the most attention-grabbing vehicles ever made!

So now you’ve seen the line-up, which car would you take for a spin around Tokyo if you had the chance? 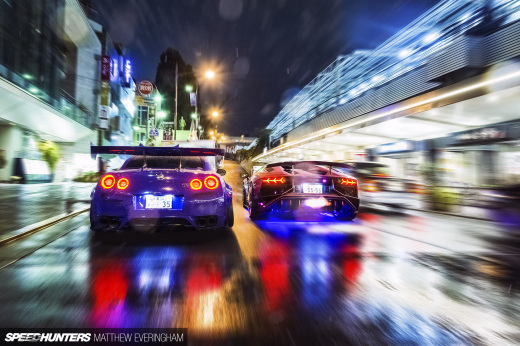 g wagon 6x6 cause i would laughing the whole time

Is the Porsche parked middle of an intersection?

That 6x6's prob bigger than most Tokyo hotel rooms

LukeEVOVIII I know you would haha

It is indeed, this in Akihabara

I honestly wouldn't want any of these cars...maybe the benz but I would rather be in a ke70 corolla than owning one of these cars. I guess I'm just more attracted to older Japanese cars or the cars most people would not give two craps about owning but have so much potential. These are nice cars but they really scream the need for attention. I don't want THAT kind of attention, I just want to take things nice and easy. Give me anything from N-style (minus that s15/e46) and I would be so happy

A simple Skyline GT-R would do for me.

A Porsche 993 RWB of course, while packing a rotary engine at the back.

only choice the SV
12 cyl  echoing from the bulidings fighting any other sounds around..  even in low revs loud and beautifull  as hell

The 997 series is my eyes the best looking 911 and ever built and one of the last true sportscars!

I know exactly in Tokyo where this is

The AMG! I don't like supercars but that thing is badass!

RickyVasquez My favourite car in that lineup is Citroen CX… am i on the wrong website?

as Wayne answered I didnt know that a single mom can get paid $5879 in one month on the internet . This Sitesee it here=====daily-salary­­.ℭomllllllll

So what happens if the guy in the lambo needs to get out?

My Uncle Daniel recently got a new Audi A6 by work using a lap-top. published
see it here=====report55­­.ℭomllllllll

My Uncle Cameron recently got Ford F-150 from only workin on a pc. read review ====Dayjobs88.comᴵᴵᴵᴵᴵᴵ

My Uncle Austin just got an almost new yellow Honda Accord
Sedan just by working online... go to website fly38.comᴵᴵᴵᴵ

Dino this is right down the street from the hotel I always stay at in Tokyo.  I know that street very well.

my father in-law recently got a twelve month old Cadillac Escalade Hybrid only from working off a home computer. you could try this out..........richway3.comᴵᴵᴵᴵᴵᴵᴵᴵ