SHARE Time Machine: Flat Out On The Tokyo Aqua-Line

It was the mid-‘90s when I first learnt of Japan’s infamous highway racers and their late-night exploits on the Wangan, and as my fascination in this illegal and highly dangerous phenomenon grew, so did the will to one day experience it for myself. Hidekazu Koseki of Scoot Sports was able to make that dream come true in early 2001.

I had met Koseki-san in late 1999 when he took part in a Video Option top speed trial event held on a long stretch of country road here in New Zealand. I’ll save the details for a future Time Machine post, but of the seven hardcore Japanese demo cars that took part, Koseki’s ‘Wangan Special’ FD3S Mazda RX-7 left the biggest impression on me. Not only did the Scoot machine look wild with its RE Amemiya aero, adapted Lola F3000 rear under-tray and diffuser, and spats that completely covered the rear wheels, but its HKS T51R-equipped 13B semi-peripheral-port engine beat to the sound of a 600+hp drum; I had never seen or heard a Japanese street car like it. Of course, the RX-7 did the business too, blasting 327.3km/h (203mph) through the traps on its best run.

Eighteen months later I found myself in Japan, sitting next to Koseki in his rotary creation (now packing 700+hp, but also a shorter final drive ratio) and giving one final self-reassuring pull down on the harness belts securing me in the passenger seat as we dipped into the Tokyo Bay Aqua-Line entrance.

As far as top speed proving grounds go, this underwater tunnel under connecting Kanagawa with Chiba is as good as it gets: smooth and straight for 9.5km (5.9mi); no oncoming traffic; no speed cameras. Or at least there were no cameras back in ’01… At this early morning hour, when the above-ground Tokyo highway network was at its quietest, the then expensive-to-use Aqua-Line (¥4000; approximately US$40 one way) was all but deserted.

The resulting ride was a bit of a blur – Koseki winding the engine out to 9,800rpm in top gear, and me furiously firing away on the trigger of my trusty Nikon F4S with a roll of Fujichrome Provia slide film loaded up; one eye locked on the vanishing point in the distance. It felt every bit as fast as 300+km/h through a tunnel actually is, and the sound – just wow.

As I’d hoped, there were a few would-be challengers along the way too, one of which was a very evil-looking and angry-sounding R33 Skyline GT-R if I remember rightly. But on this particular evening 15 years ago, none could match the Scoot RX-7 for acceleration and top-end speed.

After a few hours of fun hitting all the Tokyo highway hotspots, the night came to end at 3.00am. I’m guessing I was slightly delirious from the experience, because I had Koseki-san drop me off in the completely wrong part of the city, which resulted in a 90-minute walk back to my shoebox-sized apartment in Shinjuku and a bizarre encounter with a bosozoku bike gang along the way. But that’s another story…

Check out this old Video Option compilation featuring Koseki-san and the Scoot RX-7 on the Tokyo Aqua-Line from the 12:15 mark. 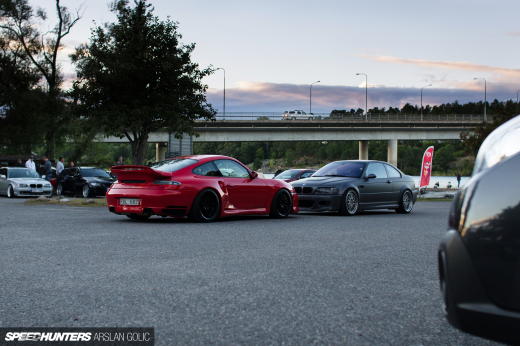 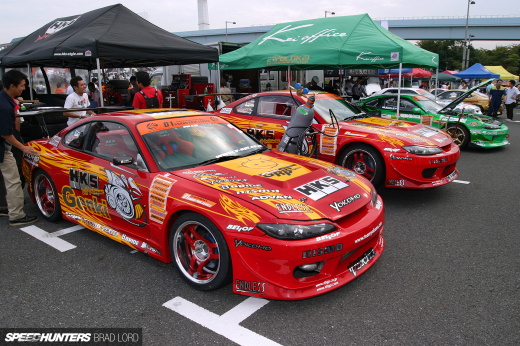 Remember When Pro Drift Cars Were This Cool?

Yes! I'm glad more of these articles of these old school power houses are coming out! Articles like this will help the younger generation of car fans have better understanding and respect for the origins of what "JDM" culture originally was. It's amazing that you got the experience this era first hand in person!

I think if we're being real here, it would be the Kanjozoku who would be credited with the "origins" of "JDM" car culture..

JeremieSunico Exactly. Let's hope horsepower and a proper suspension set up wins the war over FRP haha Oh my, what have I gone and said now?

I still have the nzpc with this article in it!

speedhunters_dino JeremieSunico you dun goofed dino, now stanceboys will call you a hater and blow vape smoke in your face

Just watched HIGH OCTANE 2000 with a few mates and this puppy made an appearance. very cool. shout out to Ketzel for the lols, i think i still have the NZPC mag this was featured in.

Is this car still alive?

How am I meant to get any work done with stories and videos like this?

Honestly that video was so rad. I remember you guys featured that white top secret skyline years ago.

@Nick both kanjozoku and bosozoku

Well No Good Racing , as well as Wharp, Topgun, Temple and other teams that would probably argue that it was themselves and their associates that would be "credited" ( I guess that would be the best way to describe it) in originating what is called, "JDM".

Paddy McGrath find another car from tuners if you can. Maybe like finding HKS's abandoned cars and their history, a story about Mid Night Club or even tracking legendary tuners from old Option Videos! (I meant that enthusiastically)

I don't think anyone's allowed to talk about the HKS cars....

I just googled speedhunters so perharps I am first time here. This article is amazing, thanks for great bring me the great feeling

Same thing goes for Mid Night..swore themselves to secrecy.

@Roy Fuckin' A Roy! Internet high-5 to you sir. That was the FIRST thing I saw.

i am a bit curious to know who is chiba kun after watching this for 1:15!

awesome flashback would of loved subtitles.

I dont know what you guys are talking about , minute 18:50 is where the action starts

Dude ! I recently was flicking through an old NZPC with this feature in it - still the best era for JDM goodness if you ask me ! More of these 'old' features please Brad !

Well.... Go on with the story of the bosozoku encounter

One of my best memories in my r30 was beating 2 r32 GTRs in the aqualine and topping out in 5th. Also the scariest moment of my life lol

You were there for the NZ runs? And rode in this car??? Homie. Storytime is due!

While speed cameras supposedly show up in the Aqualine these days, I've never actually seen one. I drive it nearly every weekend, and still consistently see drivers either flat out or close to it.

A few years ago, on the way to an early morning shoot, I saw a winged beast parked off to the side of the tunnel start, and at about the vent chimney mark saw some lights come off the down slope in the distance. Soon after you could hear the noise. I pulled over to the left, and three Skyline passed at Shinkansen speeds, making the same type of whoooosh noise as they cut the air.

While I routinely ignore the overhead 'You Are Speeding' flashing ambers, those little things on tripods with all the wires near Umihotaru still worry me...

familycar Ha! See above. It was you?

johnbezt Same here. Apparently its common outside of North America as the past tense of learn. Although still not technically correct.

@Kuroneko familycar lol well if you saw a panda r30 literally on the rear bumper of a blue bnr32, it probably was

this was a few years back tho

@Nick Sir you need watch more original video option videos and home videos from the late 80s throughout the 90s. That documentary only recognizes Kansai's division and contribution. Video-Option traveled throughout Japan to document what was going on nationally.

speedhunters_dino JeremieSunico Traditional practices are dying out as the pioneers get older. I was raised straight up on old 80s-90s Option and home videos, but not many people were introduced to "JDM" culture that way to follow in those footsteps. Some kids out there are probably working their butts off trying to
achieve similar setups, but haven't been exposed to the limelight yet. Much like the original FnF phase of the earl 2000s, trends will eventually die off.  We'll see how much longer this globalized car culture scene last.