SHARE When Two Become One: A W8-Powered Volkswagen K70

There are very much two sorts of people in this world; leaders and followers.

What I’m about to show you is the latest in a long line of ingenious builds from one particular UK man, Pipey McGraw. Pipey has a penchant for this sort of thing, and you might remember his rear-mount rotary-powered Golf MkI we featured in 2014. I think when you reach that level of crazy, then you’re always going to have your work cut out to go up another step, but in this instance, I think he’s probably mellowed out a little bit. Well, at least for now.

The K70 is very much the lesser known Volkswagen, probably because it’s not really a Volkswagen at all. The model started life as an NSU until Volkswagen acquired the company and decided to keep the car in production for a few more years. It was the epitome of utilitarian vehicle; a front-wheel drive saloon with around 70hp was never going to set the seat of your pants on fire, let’s be honest.

These humdrum factory statistics make it the ideal candidate to be reborn as something with a little bit more character. In this case, a full 4.0-litre W8 and 4-Motion swap from a Passat W8. This isn’t just an engine swap; this is literally a Passat W8 with a K70 body dropped on top.

It wasn’t straightforward; the K70 had to be extended by several inches to make everything fit under its much older body. The length was added at the front, with the wings neatly modified to make it look seamless.

The original interior remains – sort of – with the more modern Passat clocks installed in the instrument binnacle, and a beefier tunnel.

The seats are currently all-aluminium Kirkey Racing items, which I’m told are surprisingly comfortable, but are planned to be replaced with something more in keeping with the vintage of the car.

When that happens, there won’t really be any visual clues to the K70’s far more contemporary performance. It’s running around 300hp with similar torque figures through the four wheels, albeit under a much lighter body.

There’s even a video; the straight-piped W8 gives it quite a unique sound and it moves much faster than you would ever, ever expect. It is absolutely brilliant.

Whilst this might be step back on the crazy scale for Pipey, it’s still marvellous. Although, his next project is definitely going to divide like none before. Did someone mention a Jaguar E-Type? 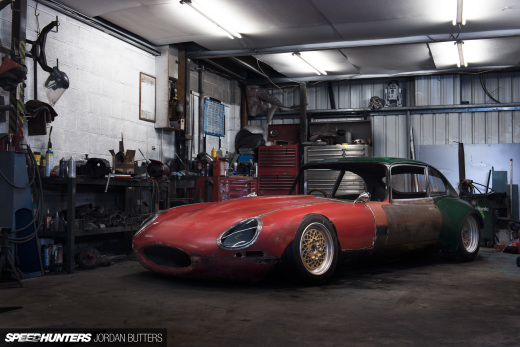 Build In Progress: A 20B E-Type Screamer

Plastic engine covers are FUGLY. Also they make covers for those seats. If you are going to have those seats the car needs to be gutted with a cage.

Chri5 Duncan You didn't read it, did you?

Wow that sound and the way it takes off... totally unexpected!

That sound is absolutely organismic. Right up there with a quattro 5 cylinder.

As I said in the original players classic event post, I spent much longer than I should have pouring over this, one detail I like is the gauges, when comparing them to the original ones, the layout is very similar and the red needled design works perfectly with what would have been there before. Imagine bolting two turbo's or a supercharger onto this... I can't wait to see what the future holds for this car.

Best feature video I've ever seen on SH. Goosebumps.
please include something like that for all your features!
well done!

Never realised just how good the W8 could sound.... I need one in my life now!

Super cool! That sound is amazing....I first heard it via that video a little while back, and it still gets me excited every time I hear it. So good!

Tomo Pattison Organismic? 5 cyls of any kind come in a very close 2nd to this, but only by a tiny bit!

What wheels are those? They look amazing!

@VDubya there were some big steelies made by VW, 18" for sure, I've even heard about 20" for Touareg, but never checked these rumors...

I wasn't that impressed until I saw the video... Holy crap! The sound is almost as awesome as the acceleration! I wonder what the 0-60 time is, it looks incredible.

Paddy McGrath Chri5 Duncan Amazing how many people rush to the comment section before even reading anything on what they're about to type about!

Awesome car though, didn't even know about the W8!

@Matiz Is it weird that I wanted more info on those steelie spares too?

Paddy McGrath Chri5 Duncan Yeah, I read that he's going to change seats. Regardless it could have a more Spartan interior. I should mention that it's a nice build otherwise and someone could remove the plastic covers very easily. Plastic covers are for people that never open the hood anyway and don't know what they are looking at if they do.

Paddy McGrath Okay, it's AWD (had to google 4 motion), it deserves even more kudos. It really needs a full article with some underneath shots.

Only the plastic cover of the engine looks way outta place

You can just about see the sello-tape holding the drivers side rear window up.

Chri5 Duncan Paddy McGrath That 'plastic cover' is actually the cast alloy inlet manifold, it probably won't be advisable to remove that bit. I guess you could remove the little moulding with the W8 badge on it... but it'd look ugly.

SnoozinRichy Paddy McGrath my apologies then, being negative but it's just my own ignorance. I'm a Japanese car specialist but that's still no excuse.

It's going to take one rich guy with an old VW to see this guy and want their own and he'll be the british equivalent of Akira Nakai.

Chri5 Duncan Paddy McGrath Also it's probably what he's going for with the contrast between new and old and the surprise people would get when they open the hood even if they're not really an enthusiast. Remember how someone styles there car is completely personnel and usually a reflects the owner.

RadostinVelchev It's not a cover, it's the inlet manifold.

@VDubya They look old T2 kombi/Microbus wheels. Not sure though...

Those seats work a treat for displays, but I wouldn't want to use them in summer or winter... Leather covers perhaps?

I remember that GTI build; although I had some nuances about how impractically low it was (to each his own and all that), I was thoroughly impressed with the ingenuity and craftsmanship gone into a build that - given some changes of my own - would love to apply myself. This is another example of taking a - in this example an extremely tired - setup and giving it a whole new lease on life. I am also a sucker of keeping all of the components relatively in the family, as well. Definitely my kinds of builds.