You Always Remember Your First

Do you remember your first car? Of course you do. Even people with very little interest in cars will likely have fond memories of the first automobile they ever owned.

Sure, these first cars are often cheap and crappy, but we love them just the same for the newfound freedom that they represent.

But a first car doesn’t always have to be a hand-me-down family sedan or a cheap beater. Sometimes they can be a lot more than that.

Tony Angelo’s first car definitely falls into the latter category – and he still owns it today. It’s a machine that’s about as cool as a first car can get, and one that he’ll likely keep forever.

If you’ve followed drifting at all in the last decade, then you’re likely familiar with Tony. Whether it was competing in his Mazda RX-8 or Scion FR-S, or serving as a judge for Formula Drift, Tony is one of the OGs of the American drift scene.

But Tony’s automotive tastes are diverse, and before he was sliding around in Japanese sports cars he cut his teeth in some old fashioned Mopar muscle.

As a teenager growing up in the Philadelphia area, Tony raised the funds to buy his first car the old fashioned way – by working summers in a tire shop and saving every last penny.

One day while looking through the local newspaper classifieds, he found an ad for a 1971 Dodge Demon for sale in the Philly suburbs.

It wasn’t just any Demon though, but a numbers-matching factory 340 4-speed car that was priced cheap. It turned out the guy who owned it was going through a divorce and didn’t want his wife to take the car with her.

Needless to say, Tony jumped on the deal immediately. In fact, he was so excited that he slept inside the car in his parents’ garage for the first couple of nights.

Tony was soon spending every evening wrenching on the Dodge, redoing the suspension and brakes and learning a ton along the way. He drove and enjoyed the car through high school, but when he left for college the Demon ended up sitting idle in the garage.

As Tony became more serious about drifting he eventually relocated to California to pursue his dreams of driving professionally. Back in Philadelphia, the Demon still sat dormant – eventually with its engine removed – for the better part of a decade.

In 2012 Tony moved his drift program back to Philadelphia and this gave him some time to put the motor back in and fire it up. But that’s pretty much as far as he went with it.

Fast forward a few years and Tony once again found himself moving to Los Angeles, this time to work as a host on Hot Rod Garage, the popular video series from Hot Rod magazine.

And what better car to use as a project on the show than the Demon. After so many years, the old Mopar would finally be getting the attention it deserved.

Tony hauled the car across the country to Los Angeles last summer, and soon it was time to breathe some new life into the Dodge. The first order of business would be to get it running again, with the plan to show how to refresh an engine that hasn’t run for a long time.

Unfortunately, things didn’t quite go to plan though. After the initial fire up the engine seemed okay, but after break-in an oiling problem seized up the entire motor. Because this was an original numbers-matching 340, Tony didn’t want to destroy the block or swap the motor out for something else. At the recommendation of Moto IQ‘s Mike Kojima, Tony went to Engine Supply in Santa Ana for a full rebuild.

The plan was never to go crazy with the motor, and with some basic cam, intake and exhaust upgrades the little small block is now putting out about 300hp and 325lb-ft of torque to the wheels. And it sounds just perfect while doing it.

It was the same story underneath. Tony wanted to improve the handling of the Demon but he didn’t want to chop up the frame, so he went with a full bolt-in subframe and rear suspension setup from QA1 to replace the ageing factory equipment.

In addition, the brakes were also upgraded to large bolt pattern discs on all four corners with a 3.91 Sure Grip rear end putting the 340’s power to the pavement.

The wheels are Basset NASCAR-style D-Holes, 15×7-inch up front and 15×8-inch in the rear with Falken tires all around.

While Tony’s Demon is certainly no show car, he says he loves the way the old Dodge mixes sports car performance with that rowdy V8 muscle car feel.

It goes without saying that there’s plenty of inspiration here for my own Mopar A-Body build, and I’ve been watching Tony’s adventures with great interest. I can’t wait to see what happens next.

Not bad for a first car, eh? 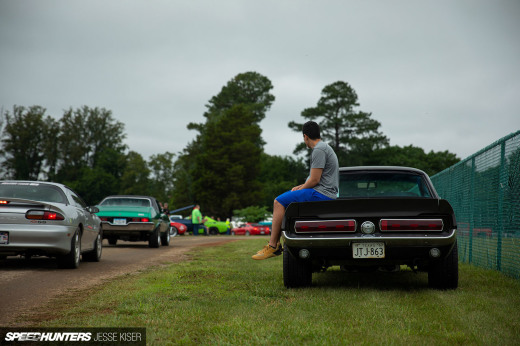 My man! I did the same! bought a mopar as his first, kept it for life!

even has similar wheels to mine

He's a great host on youtube, the car is tasteful and I have enjoyed watching it evolve on the show.

Can I submit photos of my build

Bought my first car the other day... 1985 K10 Micra. Awesome little car and loving every minute of owning it!

Super proper, my only recomendation Tony would be to put mag panasports instead of those heavy steal wheels. Get that golden era Trans Am look that nobody really does with Americana. Had similar wheels on my 01 jeep wrangler sahara with oem dana 44, (which was first car and still own it) and were heavy as Fuck. I really felt the weight when i went trailing.

The Demon is definitely a different sort of car. It's hard to explain unless you've seen one up close; similar to other Mopars but unique in it's own way. Rare enough to catch your eye. Even in these great shots, it's hard to capture the Demon's spirit. Great job, Larry.

Great article, whereabouts is that initial shot taken? Around the Dodgers stadium?

Larry - The next time you see Tony Angelo, please thank him for me for NOT making it a stupid resto-mod muscle car w/20" wheels stuffed in the wheel wells. This Demon is a true resto-mod.

A Demon set up exactly like this was my dream car for a long time. I've since moved on to older Darts, but it's almost frightening of how similar this is to what I had imagined. Beautiful car, I wouldn't change a thing. I still have my first car (truck); and I will never part ways with it. I've been given offers of 3 times its value before and I've still turned them down. You can only ever have one first car.

Looks like a hot wheel. Beutifull. The bolt in sub frame was a wise choice because once you cut up that classic you cant undo it. I disagree wkth a earlier post about the weels. If you thow on a classy looking set of 17s 0r 18s you can reduce some tire flex for a car that feels better on the corner. We all like diferent thing though and thats great. America

Love it!
First cars are special, I won't be letting mine go. $400 1994 Mustang, "No Pulp", that I got at 12 and build the entire thing with my dad. It's no professional build, but its different and has won a few awards. A vehicle I truly feel is mine.

mk3 You are correct: https://goo.gl/maps/xDPdPkayGa12

LukeEVOVIII Even better. Have fun ripping through those gears.

QuattrogroupB The Bassett wheels are lightweight racing wheels and are not the same as the heavy steelies you would have had on your Jeep.  I run them on my 68 Mustang in Time Attack racing.  I really like seeing older cars with period-correct wheel sizes.

@Jeffrey Customs
Hopfully my research is correct. But an average 15 inch Bassett steel wheel weighs around 20 to 23 pounds. That is super fucken heavy for a wheel that small!! A rays te37v weighted at around 11 pounds and a enkie rfp1 was almost half that. Maybe i hang around to much with picky drivers enthusiast but thats a little over board with the weight. Honesty hearing "lightweight" and "steel wheels" in the same sentence was new for me. But your ponycar is really cool, almost looks like the vintage trans am racers that i mentioned prior.

Love seeing the Mopar love on SH. The Chrysler support isn't what it once was. I work for an aftermarket parts retailer and it's almost impossible not to send customers to Mancini Racing

This is just perfection to me.

Good gods, I love me some Demon.

Maybe that's why he is the worst drifter on earth :p.

QuattrogroupB You're right, they're certainly heavier than some other wheels.  The D-hole wheels that Tony is running are 16 lbs for the front 7" and 17 lbs for the rear 8" - which is still pretty heavy.  I guess it's form over function for me - I just love they way they look!  Thanks for the comments on my Mustang!

I kind of cheated with my first car. It's a '03 Impreza WRX. But before that I drove a Peugeot 306 for three years, but it was actually from my father. I just drove a lot since I got my license, so I mainly took it because it was around. With this convenient construction I could save money quickly to buy a better car then I've thought when I was 18. But those early days when buying your first car, those are precious. Good memories, even now after almost a year and a half. Trying to keep it for as long as possible, maybe even store it somewhere when the costs get to high. but that would be like a dream-scenario.

And I've seen the 'whole' project on YouTube and with these additional high-quality pictures I'm amazed. It turned out so nice! Well done Larry, and Mike for capturing that first-car-feeling and how he rebuilded it in the story.

Really like it, it looks great in this color! I love musclle cars!

Haha, that sticker reminds me of our old Škoda 130 we had when I was young boy. We had similar bee sticker at one of rear doors from interior side. It was crap - but cool!

The Dodge Demon has a very special place in my heart, kudos to this guy for giving that much love to an usually overlooked supercar.
The reason why I love them is because my father, who I never knew, had one. This being the third world, Muscle Cars are something relatively unheard of, specially here in Colombia where the only Detroit muscle we got in decent numbers were the Dodge Demon and Dart. My mother remembers it, a mustard yellow Dodge Demon driven through twisty roads by an alcoholic, communist economics university teacher who had a wicked sense of humour...in the 80s. Not that I condone drunk driving or communism but, holy shit, that sounds 80s south-american rock-star-ish to me!

Anyway, intimacies aside, loving the rebuild. My only "complaint" is the lack of oo'mph to bring some well diserved attention to the Demon badge. If I had the budget for it, one of my dream builds is a mustard yellow pro-touring Dodge Demon with a fuel-injected 426 Hemi running ITBs...awww yeah, that'll make me dad proud! hahahahahh!

oh the color palette of the muscle car era.........mmmmmmmmmmm

RichlyOrange SN95 Represent! My "first" car is a 1995 GT convertible 5 speed...I want to do like you've done to it but the convertible part holds me back, like it wouldn't really be worth it since it's heavy and flexier than a foxbody...plus no one really likes 95's.