I just can’t get enough of the different ways that the Japanese extract fast times from Hondas.

Everyone has their own way of doing things, but unlike on high power, turbo-engined cars where a lot of the build is centered around the engine performance and finding ways to unleash it efficiently without breaking too many components, the Honda guys have to think differently.

Unless they take the forced induction route that is, but boost can almost be considered cheating in a way. Well, not really, but you know what I mean; there is a purist element when it comes to Civics and Integras.

In the case of this particular car that I came across at Battle Evome, extracting the most out of the K20A seems to have been done with a careful mix of intake and exhaust modifications. The rest, like in the DC2 I showed you the other day, has been achieved through good old fashioned weight savings, not to mention self-designed and executed aero additions like you see here added to the front.

If you think about it, the rear bumper is nothing more than an air brake at speed, so what better way to remove that pressure build up than with some imaginative swiss-cheesing.

On top of all these openings, the lower section of the bumper has been cut clean off, giving a real menacing look to the Integra. And yes, the car still seems to be street registered! You gotta love Japan.

As for the Integra’s performance at Battle Evome, the owner/driver extracted a best lap time of 1’02″420 on the day. If that doesn’t sound like much, consider that back in the good old days when Tsuchiya and his crew at Best Motoring used to run those Tsukuba Battle videos, a stock DC5 Integra Type R press car lapped in a whisker under 1’10”. It makes more sense now, right?

With that complex front end it almost seems like the rear GT wing might not generate enough load to push the car down.

But maybe that’s how the driver prefers it, keeping a looser rear so that he can trim his line through the trickier and more understeer-prone sections at Tsukuba. The DC5 is a hell of a sweet chassis and I bet throwing this car around at pace is very exciting.

That’s my last spotlight from Battle Evome, but it’s not my last feature from the 2016 event. Stay tuned for more!

From Blown Up To Boosted: Building A Type R Dream

Behind The Fences, Part III: Racing In The ’90s 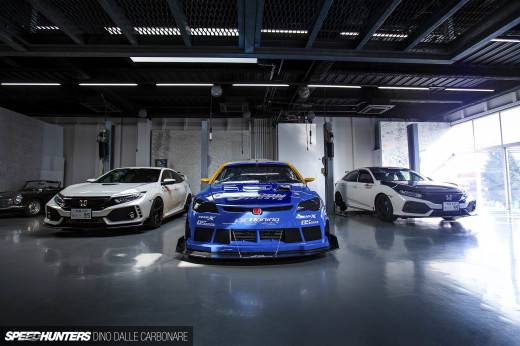 Street registered ? I want to see the Face of Shakeninspector.

I wish I could shoot and drive cars in Japan. In Australia, almost everything out of the norm will get your car defected (fined) or unwanted cop attention.

Its cool to see old hot rod/race techniques being used still..as a competitior, I use these all the time..I weigh parts before and after, etc...."every ounce counts"  "if it breaks make it stronger, if it doesnt, make it lighter"  "Nothing lighter than a hole"

Pedal is for my off road truck Im building...brake pedal got drilled as well...As will many other parts on the truck

@chris chabre  "Nothing light than a hole."

if he change the orientation of the rear plate number from to / , will the car generate more downforce?

90nissanS13@my350z
Well...its true haha... I have a buddy that is an insane fabricator..He uses that saying all the time..

hawi Of course it will!

@chris chabre I came across this last summer. Most extreme I've ever seen (tri 5 chevy)

speedhunters_dino hawi  Really? Its just a license plate, a minimal piece of the car. If it did produce more downforce it probably wouldn't be a substantial amount to make a big difference

speedhunters_dino hawi  Or there wouldn't be any downforce upon the license plate at all, considering its at the tail bottom end of the car, which the pressure of the air and wind would probably not affect it and which is why the owner of the car has lifted it up to reduce the drag

One of the last good looking hondas.

I guess shedding weight is this guys god, others would just have "added weight" in the form of a belly pan and diffuser. I myself as soon as I noticed the plate was laughing inside at the fact this guy could go get groceries in this thing or take his nan to the library haha what a mentalist.

Lol i totally get it, ive just never heard that before. It's true, its lighter if it isn't there.

@DC2R  What about MCM Mechanical Stig's Stagea with a VH41 v8 turbo swap and r34 front clip? Seems to me like you can get away with about the same as the rest of us do in terms of safe "non-extreme" mods anyway.

Where's the front numberplate? Does he not just swap out the whole bumper for track?

This is the best car I've seen on speedhunters in a while. The sheer joie de vivre of it!

It's really cool for sure.

@InjusticeRule I think you missed the playful sarcasm there.

others would just have "added weight" in the form of a belly pan and
diffuser. I myself as soon as I noticed the plate was laughing inside at
the fact this guy could go get groceries in this thing or take his nan
to the library haha what a mentalist.