No matter what country you come from or which car maker/s you support, there’s no getting around the inherently global nature of today’s automotive industry.

These days we live in a world where an Acura NSX is built in Ohio, a Ford Focus is engineered in Germany, and a Fiat Roadster will be built by Mazda in Japan.

That global reach also crosses over into the world of modern tuning and modification. It seems like in the last few years we’ve seen a massive increase in the number of high-profile builds and project cars that feature parts and styles from different parts of the world.

In fact, some of the world’s most well known builders have taken this idea and completely run with it. Thus, we get the spectacle that is a Liberty Walk Ferrari or an RWB Porsche – cars built in one country and then reimagined in another.

And here we have another car that blends elements and inspiration from a few different countries into one unforgettable project. Say hello to Bulletproof Automotive’s BMW Z4 GT Continuum; a car which received a ton of attention at last fall’s SEMA Show.

I’m guessing by now all of you are familiar with Bulletproof Automotive; a brand which has long been known for distributing high-end Japanese tuning parts to America and other countries, as well as putting out some very special builds of its own.

And to celebrate the company’s 15th anniversary, the Bulletproof team wanted to create a car that would not only stand out from the crowd, but also symbolize everything that the brand has been about during its decade and a half of existence.

To start out, they’d need to pick an interesting base car; one that was a capable platform, but also something that’s not often seen. And thus the choice of an E89 BMW Z4 with an N54 twin-turbo engine and a 6-speed manual gearbox.

Despite being a very stylish and well performing machine out of the box, there aren’t a whole lot of people out there fixing up Z4s. But Bulletproof saw the German two-seater as the perfect base to do something interesting with.

And more importantly, it’d be an ideal platform to execute a vision that includes European performance roots, a selection of high-end Japanese styling parts, and plenty of homegrown American ingenuity.

And it’s that ingenuity that truly sets the car apart. The first thing you notice is Bulletproof’s custom speedster conversion, which includes a full delete of the factory retractable roof and a low-profile windscreen to replace to the original windshield and A-pillars.

Behind the cabin, a double-hooped panel covers the original roof compartment and gives the BMW a dramatically different look than any other Z4 out there; one that brings to mind the classic speedsters of the ’50s and ’60s.

The custom speedster conversion is actually so dramatic that you almost overlook some of the other exterior modifications; like the full wide-body conversion from Varis, the Japanese brand Bulletproof has long worked with.

And towering over the rear of the car is a massive 1,800mm GT wing which also comes from the Varis catalog. Up front, a pair of custom side mirrors only add to the exotic look.

And sitting behind the concave spokes of the G25s you can also see that the Z4 has been fitted with a complete brake conversion from an F82 BMW M4. The adjustable coilover suspension meanwhile is from Japan’s well-respected Aragosta brand.

Built for the Senses

As you might imagine, the Continuum wasn’t designed as an all-out performance car, but that didn’t stop Bulletproof from treating the twin-turbo N54 to some basic upgrades. The motor has been fitted with a Stage II setup from ESS Tuning along with a custom ETS intercooler kit. And don’t forget the trick side-exit exhaust, which was a custom project created by the Bulletproof team.

Inside the cockpit of the Z4 you’ll find things have been completely redone with red and black leather upholstery along with Alcantara inserts. The seats themselves are power units from a BMW M4.

Other cool interior details include a set of a Macht Schnell pedals, as well as a vintage Porsche shift knob to complete the retro sports car look.

Not only has the Bulletproof Continuum Z4 project gone far beyond the scope of a traditional tuner car, it’s managed to take classic sports car inspiration and blend it with modern technique in a very seamless package.

As I’m told, the Continuum Z is not meant to be a race car, nor is it intended to be a daily driver. Instead, it’s meant to be an intense and memorable experience, and that certainly seems to be the case whether you are behind the wheel or just looking at it.

It’s ambitious and unique, and blends elements from across the world. Hats off to Bulletproof for thinking outside the box and creating something a lot more interesting than your typical shop demo car. 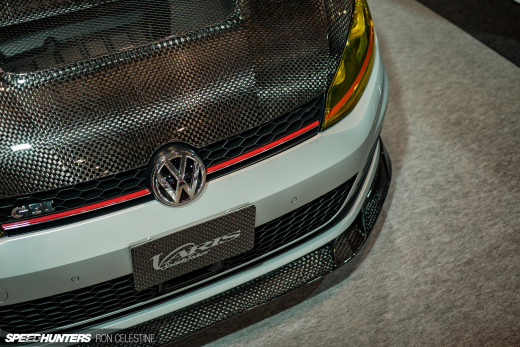 Staying Ahead Of The Trend: Varis’s Solid & Joker Creation

Seems like Bulletproof is truly making a change in tuning. Looks like a Time Attack inspired Z4 with the streetable look.

I like this car. The styling is fantastic. However I don't like the interior, it seems like it was rushed; the flat diamond stitching, with a painted steering wheel.

Dunno why but the only car I can think of when looking at this is the Original Porsche 550 Spyder (ala James Dean!)

Also it's a fantastic Birthday gift from Speedhunters!! U0001f609

Looks like it is almost a clone of the ronin rs 211 right down to the color and shift knob.
http://jalopnik.com/the-worlds-fastest-lotus-is-back-1662627938

20s on performance oriented (or performance styled whichever you prefer) still kind of blows my mind. I remember when they just came big and chrome and occasionally spun.
I suppose my cane ought to arrive in the mail any day now and my temperamental old man transition shall be completed.

It's different and something new I like it. I think I would like it more if it didn't have the spoiler, or pointy rear diffuser, and also if the fins behind the head rests were lower and smaller, but it's their build not mine so well done thanks for the post.

it's probably me but this car now looks waaaay taller than an original Z4. Almost like an Isuzu VehiCross in attitude. I get that it's visualy wider from the kit, but something make it look like sheets of bisecting styrene were piled on top of it.
Amazing photography!

I absolutely love this car. Incredible, much like the Jaguar XK180 concept, or the Aston Martin CC100 concept - except far more aggressive. The wing is not to my taste - it lifts the visual height of the car. Without it, this car would be low and wide. In the end, it's their concept, and kudos for imagining such an incredible build. I just can't keep my eyes off of the speedster hoops!

I'm sure LOT of work must have gone into making the car look like this but it doesn't have the clean lines expected of a roadster with a chopped windscreen. But then again that's just my opinion.

This car is awesome, it reminds me of those vintage racing cars like the Mercedes Benz SLR or the Audi Streamliner

Way much better than the SLR Stirling Moss...quick, someone imagine this car in any racing livery!

I wonder if they'll release a speedster conversion kit - I'm curious how would it look without that bodykit.

spencerpieters OMG! What have they done to it? Lol

Those bulletproof assholes drive this thing, WOT, back and forth, at night, next to residential neighborhood I live in.

The styling looks like they are trying way too hard for attention IMO, not a fan of the build or the guys who built it.

e36techniks "Riced out" is when a civic owner puts a loud exhaust and a big wing on his car for no reason. If it's functional like it is on this car, it's not riced out.

Love it. Although the windshield looks like it's slightly at the wrong angle and is triggering my OCD haha. Also it looks to aim the wind right at your eye-sockets!!

Agree
As I scrolled down the main page, that was the first thing that came to my mind...

e36techniks would love to have that 'problem' lol.

AspiringEngineer e36techniks  Would you care to explain how a loud exhaust or big ass wing on this car is any more or less functional than on a Civic?

That still doesn't account for the questionable pin striping or multitude of "functional" vents that adorn the entire car.

It is more functional because this actually has the performance to utilize these components. This has the power and the suspension setup to be really fast around a track. It does have a custom exhaust which could reasonably give more power and not just there for sound. Ricers by definition do not have any more than looks or sound as RICE is said to stand for Race Inspired Cosmetic Enhancements.

Besides maybe a touch of restraint, I can get behind this. Figuratively and literally.
Add this to the list of shit BMW didn't do with the Z4 while the race car was around.

Great photography and I dig the retro-modern style it stands out and is unique.

Lose the spoiler. The rest is already good.

MikeRin I like those kind of spoilers, but I agree. Drop that spoiler and it would really nail that retro-modern style perfectly.

I do believe that the shift knob is from a modern Porsche not classic - Porsche Carrera GT. The car looks pretty cool but the engine...well, that looks garbage. If you invest this much money and hours in a car, you should probably open the bonnet more than twice and do some proper customization in there.

In the words of Zane Lowe "You got to respect what they're doing."

The z4 is one of most beautiful machines to come out in the last 20 years. The M coupe makes me drool.

i mean look at this fucking thing.

maybe if it didn't have two hundred pounds worth of shit screwed on it, the shit tier basically stock engine could get this shitheap from 0-60 sometime this weekend.


i usually love unique cars but this is downright rice and the epitome of what the car scene DOESN'T need, more pretentious douchetards bolting plastic to bmws.

I like the interior...and it definitely defines thinking outside the box.

Bulletproof always takes things to another level with the quality and detail of their builds. I was blown away when I first saw it at SEMA in November, but I didn't really have a chance to take it all in because I was in a rush..

When I saw it sitting in the sunlight 2 months later at Winter Drive in So-Cal, I was like damn - this thing is impressive. Looks awesome.

One of my favorite tredns right now is Japanese parts on European vehicles (and vice versa - although happens less often).

Lol. The engine bay says it all. dust and tears is all thats gone into it.