To Move Forward, Look Back

I’m just going to come straight out and say it: there has always been a certain ‘way of things’ when it comes to modifying an older rotary in New Zealand. It’s not necessarily a negative either, but simply the manifestation of our nation’s taste for personalising Mazda’s offerings of the 1970s and ’80s. The way the rotary scene has shaped the landscape of the local modified Japanese car community cannot be denied.

The formula has always been pretty simple: a healthy ride height reduction, a set of either small-diameter period wheels or large-diameter Simmons or modern equivalents, stock body lines and of course the requisite clean engine bay housing a detailed 12A, 13B, or 20B in the more extreme builds. While wandering the pits during my recent weekend at the Mothers Chrome Expression Session, I happened across the latest incarnation of Mark Strawbridge’s Mazda 616 Capella. That’s right, this car started life as a piston-engined machine back in 1973.

Despite being a departure from the local rotary establishment, the old Mazda is no less attention grabbing. The factory panels still exhibit signs of their decades in the elements and subsequent rust repairs, but it’s the 1970s All-Japan Touring Car Championship inspired livery plastered atop the original paintwork that provides the defining aesthetic.

The result – an imposing presence for what is a fairly diminutive, lithely-styled little car. Keeping this thing in your rear-view mirror during a race wouldn’t necessarily need to be a by-product of trying to stay ahead, rather than enjoying the view of arguably the best angle displayed by the 616.

The Capella has been a long-term project for Mark, and in the eight or so years he’s owned it the natural progression of car-guy indecision has affected this build in its own way. Originally set up with a boosted 13B, the larger block recently gave way to a naturally aspirated 12A. In a search for power the housings have been peripheral ported – the ultimate in N/A rotary porting – and breath air drawn in by a balanced rotating assembly featuring lightened RX-7 rotors.

No proper old school ported rotary setup would be complete without some form of Weber IDA carburettor towering above the block, and Mark’s chosen method of fuelling provides the correct air/fuel ratio through twin 48mm throats. The IDA satisfies the demand for 9000rpm pulls, which is precisely where the 12A makes its peak output of 240whp. Custom touches are abound, like the carbon fibre plenum drawing air from the driver’s side inner headlight bucket, and the CNC-machined water outlet plumbed with -16 AN Teflon braided lines that feed the cooling system. Ignition is taken care of with a Link G4 Lightning ECU.

While the exterior and engine bay have seen the winds of change throughout the 616’s many incarnations, the custom-barrelled Simmons FR15 wheels (15×10-inch front and 15×11-inch rear) have remained something of a constant, although the unique colour is a recent addition. The Mazda sits at just the right height from the tarmac; custom platform-adjustable struts at the front end with purpose-built Bilstein shocks keep things in check. The rear remains live axle, in this case a heavily-modified Toyota Hilux LSD-equipped item located via a rose-jointed parallel 4-link arrangement.

Peering through the glass, the Capella’s racing intentions are clear. Master fabricator Graeme Smyth (whose recently-featured S15 you might remember) knocked up a 6-point rollcage in the interests of safety, while Racepro fixed-back bucket seats provide perhaps one of the only concessions to the traditional rotary nuances, although again are a functional choice.

Inside it’s not difficult to imagine being strapped in amongst the scarlet tubing and attacking KPGC10 GT-Rs under brakes at the old Fuji Speedway. There isn’t a great deal inside that doesn’t serve some sort of purpose; the floor-mounted Tilton pedal box, classic Nardi steering wheel and assortment of Auto Meter gauges all ensuring the job gets done effectively with minimal frills and maximum enjoyment. Factory dashboard and door trims remain as a reminder that the build began as a simple road car refresh.

With a best of 1:22 around the Hampton Downs Motorsport Park circuit with minimal seat time, Mark unfortunately never got the chance to improve over the Chrome Expression Session weekend. The 12A decided playing ball wasn’t an option and cried enough with only a lap under its belt on the Saturday. Regardless, the little Mazda spent the weekend parked in the pits showing the assembled crowd there is another angle on the classic Kiwi rotary build. With a retrospective glance, a solid team of passionate friends helping with the build and a resolve to forge his own path, Mark’s car harks back not only to its international rotary ancestors, but also pays homage to New Zealand saloon car racing of yesteryear.

Fancy a crisp 12A soundtrack for the evening? Watch Mark put the car through its paces at the Rotary Racing Enthusiasts series at the Hampton Downs last year. 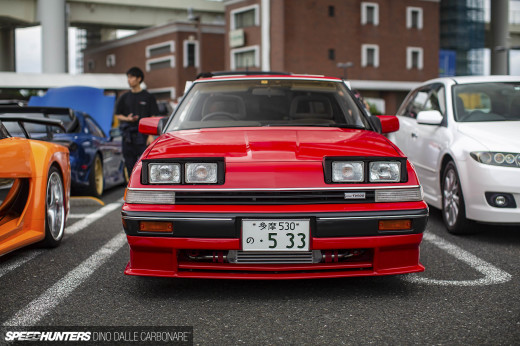 Hey Mazda, Bring Back The Cosmo!

That has to be cutting it close to the noise limit. Gorgeous car.

Pure music to my ears...its now really rare to see 12A builds. New Zealand, Australia and Puerto Rico are pretty much the only places I see that still build serious 12A.

I need this in my life.
And cheers for the video mate, sounds great!!
Other speedhunters take note:
We need videos!!!

Agreed!! I was going to say from now on, every car featured needs a video of it being thrashed around a track the way it should be

The engine and engine bay are perfect and super tidy for a track car and the interior is really quite neat and purposeful, but the exterior is just a bit off IMO.

The flares are not right for the car(are they 4 front or rear flares meant for another car?), the lines over the wheels just don't flow nicely and look really awkward(most noticeable on the side shots). I preferred it's POLICE look without the flares if I'm honest.

This is a tough looking scrapper of a car haha! Looks like it's always itching for a fight.
Impeccable display of detail and decal placement. Great writing on this one, too!

Speedhunters It looks cool for sure. But it sounds like a pissed off bee in a can. Owo

Speedhunters It looks cool for sure. But it sounds like a pissed off bee in a can. Owo

Man he has some epic gangster lean on the seat backs..

earmenau I hadn't noticed the ratio before reading this comment!

EliThanos Agreed, we're pretty keen to make it over to Puerto Rico sooner rather than later!

SiggyCloud Speedhunters Just how it should sound!

Its sound like farting inside a Pringles can except itu ten times louder and less smelly.......

@timmy201 These Racepro seats are just like that, these are hero-level early import scene status here. They just have a sloped headrest area, the seat back itself is sensible.

vroomtothetomb Really. A friend of mine has a 12A powered RX2 sedan also, which again runs a 12A PP and it's poking out only slightly less than Mark's car... so it's totally achievable.

@scotty good spotting, it's pretty rare to find a 616 still sporting the original tail lights, most rear panels get swapped out for an RX2 one or modified to suit RX2 twin round rear units.

Spaghetti I enjoy both, but if I'm honest I think I prefer the current guise... the nostalgic look just spins my wheels in the right way. I'm just a hopeless nostalgic.

Chris 'Haffy' Hafner ten-four buddy... will do what I can for anything in the future, although I'm a seriously dire videographer so I hope I can find decent Youtube links.

Absolutely gorgeous.
Have you got more pics of the engine ? especialy the intake/exhaust side. Thanks.

A pp is for me the ultimate engine : simple, little, light, revs hungry, and powerful. Best engine ever for a lightweight car.

Oh by the way, would you like to come to France to shoot an NA 13b PP miata ?

This is pure filth! It's giving me the itch for something different and classic!

This is pure filth! It's giving me the itch for something different and classic!

SnoozinRichy TimRuddell If you can't hear the pulsing from the traffic lights a kilometer away, it's too quiet.

SnoozinRichy Spaghetti Don't get me wrong, I like the look usually, but the flares just seem wrong here(they don't fit the car well nor flow over the wheels correctly).....I also don't like them in grey. Perhaps if the flares were black and the gold lips of the wheels were another colour(black or polished) it would gel a little better. It's close, just not quite there for me.

MaximeGb Sounds like a rad wee car! As much as I'd love to go to France I don't think it's in my budget to get there, especially in 3 weeks, but best of luck with the start-up.

MaximeGb Sounds like a rad wee car! As much as I'd love to go to France I don't think it's in my budget to get there, especially in 3 weeks, but best of luck with the start-up.

MaximeGb I've added a full engine bay shot to the Bonus images, however I haven't any detail on that side of the engine sorry!

SnoozinRichy MaximeGb Thank you man, will send you pics and youtube link when it braps like it should. Perhaps it'll make you change your mind !

fenders scrapping in every corners mean lost hundreds on a lap time. this car is too low... just sayin'