As promised in my last, admittedly slightly whiny Project X story, I’m back again with far more positive news – news that would come in the form of a friendly knock at the door from a predictably super-efficient Japanese courier standing next to a stack of big boxes.

Finally something to get excited about! A couple of weeks ago our friends at RAYS and Toyo Tires, perhaps feeling a little sorry for Taryn and I, got in touch and offered to help shod the troublesome JZX110 Toyota Mark II with a fresh set of rollers. The timing was great too, as the 19s that the car came on were fairly horrible (by Japanese standards, anyway), and the 18s that we have been using to get around for the last month were only ever loaners from a friend.

After working out the perfect sizes and offsets – 18×9.5-inch +30 up front and 18×9.5-inch +22 in the rear – we got talking to the folk at RAYS about exactly what model of wheel we should run. Of course, when I think RAYS I immediately think TE37 or similar, but what was suggested was something a little left of field… Something a little different… Something which might just suit the modern lines of the JZX110 perfectly: the Gram Lights 57Getter.

“Sorry, 57 what?” I had asked. “57Getter,” RAYS’ Wakana-san replied. “Very light, very strong and very cool looking – perfect for drifting”. After a quick Google search, I have to say that I wasn’t quite convinced. Sure, they’re a very angry looking wheel, but at the same time the design is pretty out there, and I wasn’t sure just how adventurous I was feeling at that point in time. In the end though, I figured RAYS knew exactly what they were talking about, so we agreed.

As soon as Koki-man down at Mercury sliced open the first box and pulled aside the plastic wrapper to reveal the face of the deeply concave wheel, I knew we had been right to trust in Wakana-san’s choice.

These things are badass!

I’m really digging the 57Getter’s futuristic yet aggressive style, and I especially love how the spokes have this interesting step lip…

And this kink as they meet the rim. Amusingly, these are the two aspects I liked the least about the design when I was first researching the 57Getters online.

I guess seeing things in person can shed new light, and whilst I know this is going to out me as the massive nerd that I am, there’s a real Tron-like quality to the 57Getter that I really dig.

As I mentioned earlier, we had also been in contact with Toyo Tires, and after much discussion with the team at Toyo HQ, a set of sticky ‘ultra high performance’ Proxes T1 Sport street tyres turned up at exactly the same time as the wheels.

The Proxes T1 Sport is a replacement for the excellent T1R, which Taryn runs on her Project Z back home, but provides substantially better performance – especially in the wet. This is ideal considering we arrived in Japan smack-bang in the middle of the rainy season.

Originally we had intended to run 9-inch and 9.5-inch wide wheels, so when talking to the good folk at Toyo, we ordered 215/40R18 and 225/40R18 rubber. But since we ended up running with 9.5s at both ends, we were a bit concerned that the fronts might be stretched a little too much.

We needn’t have worried though. The tyres beaded up with ease, and while I will certainly remain conscious of the stretch, it does look more extreme than it is due to the design of the sidewall with its huge rim protector.

With the tyres all fitted and balanced, it was time to bolt these bad boys up (using RAYS Duralumin nuts, of course) and see how they looked on the Mark II.

It was at this point that we started to realise this might just be the perfect choice of wheel and tyre combo for the big JZX.

But of course this is Tokyo, and before dropping it back down, you’d be silly to miss a chance to climb underneath your car and diagnose some issues whilst it’s actually in a workshop and on jack stands.

Pulling out of Mercury, we headed for the hills on the outskirts of Tokyo where we have been staying since we arrived, and stopped just short of home to stand back and take the new look in.

I think the Matt Graphite (MF) finish and edgy, futuristic look suits the car really well. I have to say that my original choice, which probably would have been some variation of the TE37, just wouldn’t have worked as well; they would have been too ‘race’ for the look of the JZX110.

On a related note, you probably get just as annoyed as I do looking at the front of this car without its lip. We do have a brand new Vertex bumper to match the skirts and rear, but it hasn’t been painted just yet. To be honest, it sits so low to the ground that I’ve been procrastinating about getting it sorted, because knowing my luck, as soon as it’s fitted I’m going to smash it to pieces on a combini entrance!

I need to extend a huge thank you to both RAYS and Toyo Tires for their help with Project X. Seeing the Mark II on these wheels definitely helps keep the energy up when it’s late at night and we’re trying to solve some of the problems we inherited when buying this car. Read all about these latest issues, and hopefully our first attempt at a local track day, in the next Project X story in a few week’s time. 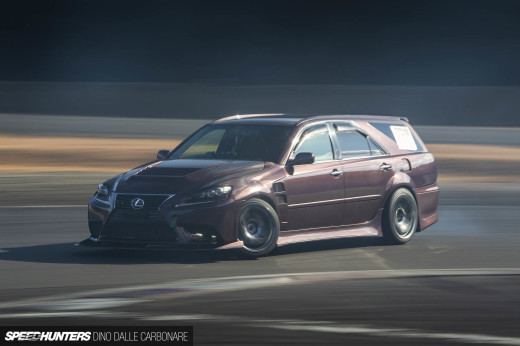 Looks like a big Corrolla or Camry on rims.

I'm 100% with you on this. Looking at the rims, there's no way I'd have picked them out for that car. But having seen them fitted, now I can't imagine anything working better haha!

The stretch will hardly be an issue, don't worry! Should look great with the Vertex front bumper.

I know the feeling. Not that I've modded my car, but I've looked around for something that would look cool on a new jetta I was contemplating buying. Online, the garbagio cheap wheels all have some outrageous futuristic design that almost always misses the mark.

The important thing to remember is that all those crap wheels are copying the design aspects of wheels like the one you chose. Seeing them in person should make all the difference in a situation like this. For a drift car, a bitchin set of wheels on a camry seems like the perfect match.

I really enjoy this project, like every little bit of detail fuels my love for cars. Such a mad projects ! Really jealous not to be living this adventure myself. Haha

Love the build guys! I just finished up my JZX110 swap in to my IS300 and have loved every second of it. Nothing quite beats the angry whine of a 1JZ VVTi at full tilt!

Looking good ! address that front as you mentioned and good to go ! thanks for the update.

Just throwing an idea out there for the front lip: get a piece of sheetmetal (aluminum would be best), paint it black, and rivet it to the front bumper. Boom. Cheap, badass, disposable front lip. Then you could also add a black gurney flap to the rear spoiler to visually balance out the front. Probably not your style, but it's what I would do if I had that car.

While i was reading your article, the front just bothered me because of the stock front bumper, OCD much?

Projects are one of my favorite and this is no exception. Glad to hear you are well taken care of after that series of unfortunate events! Volk impresses me because at the beginning I didn't like the wheels but by the end I loved them. Now stay away from curbs!!

bluestreaksti I've got my GoPro primed and ready for when we actually start driving in anger!

AEROHUNTER It's even worse looking at in person - that's why I always circle around the car with my eyes closed until I get to the rear view haha.

AirLift_Lucas Agreed, aside from an angry Nissan L series on sidedrafts, the 1J and 2J noise is my favourite of the sixes

Robo_No1 Nice, they look even better rolling too. Will have to upload a video in the next story.

Man, I really want a set of these for my BB6 now..

The wheels fit the car like bacon fits every meal!
Looking forward to seeing them in action on a drift track near you. Good work on the post too, i really enjoy reading and following your story.

Love how car culture has got over cramming the biggest possible rims it can fit under the arches. We'll leave 22" for soccer mum's SUVs! Form follows function every time.

Luke Holmes Form follows function? they just put 215s on a 9/9.5 wheel. the definitiion of form OVER function.

Wasn't convinced till I saw them on the car. Nice choice!

Hey Peter, I was just shopping around for Volks for my 350Z and I remembered how these 57Getter's looked. I am also digging the futuristic look, however, I cannot seem to find these wheels anywhere... They are not on Rays website, nor can I find a used set...may be settling for the 57xtreme's, which are also really nice, but damn I would love to see these on the Z!