A few weeks ago I was fortunate enough to visit Jay Leno’s Big Dog Garage with the Scion Tuner Challenge FR-S. If that wasn’t good enough, my fortune increased exponentially when I got permission to bring my camera. I already wrote a longer story showcasing a few of Jay’s favorite cars, but since I ran out of space I chose to hold this one back for its own Spotlight.

Leno led us through a hangar the size of a football field, and I didn’t have a clue which car he was heading for next.

Soon we stopped at his prized Duesenberg SJ. The Model J was the last and arguably best Duesenberg built, after the company was acquired by Auburn owner E.L. Cord (those names should ring a bell too).

Cord challenged Fred Duesenberg to build the biggest, fastest and most expensive car possible, and this was it. Then they hung a supercharger off the already powerful straight eight cylinder engine and called it an SJ.

While a Duesy is beautiful to behold, Jay went straight for the hood when he talked us through the car. “It’s got a 421 cubic inch engine, twin overhead cams, four valves per cylinder and a big centrifugal supercharger,” he beamed.

For a car built in the 1920s Duesenbergs really were technical marvels. Here Jay was explaining that the crankshaft is filled with mercury at each end to act as a harmonic balancer so the engine would run smoothly.

“This was the fastest American car up until about the 1950s,” said Jay. I guess that 150mph speedo isn’t lying then.

The anti-clockwise tach caught my eye too, but I wasn’t able to ask for an explanation.

In true Jay Leno fashion, he had a spare engine nearby on a stand. It’s amazing to see how much engine it took to produce a few hundred horsepower nearly a century ago.

When you ordered a Duesenberg, you started with a rolling chassis, which was then sent to the coach-builder of your choice to have a custom body built. Consider that each body was built by hand and you’ll begin to understand the level of attention and quality here.

They’re massive, solid cars – usually between two and a half and three tons depending on the body design – but Jay loves them because they can be driven like a modern car. His SJ can haul ass, turn and stop well enough to take out on a Los Angeles freeway. But what else would you expect from Jay Leno? 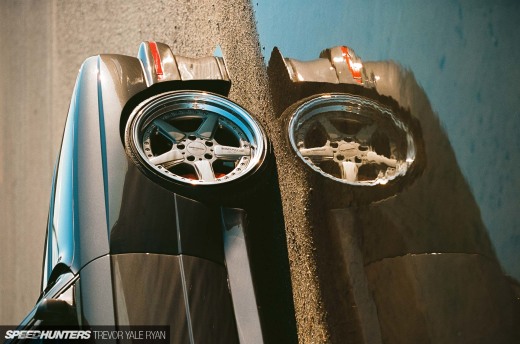 When Less Was More: A Supercharged E30 M3

oldschoolcat what an idea! Laugh more than I should...

The trolls are here...

All that and no shot of the blower?

James_Turbo In the picture of Jay standing next to the engine you can see a small turbo like shape on the left side, I think that's it.

shiftyXTI
That is the water pump

The blowers on these engines look like this (from a miller engine I think ) -
http://www.mre-books.com/turbo/images/sa89_36.gif
You can see the size of it compared to the engine behind it!

Looking at it, the picture after where he is lifting the engine lid off, you can see it there in front of him, well disguised centrifugal unit that is vertical.

shiftyXTI James_Turbo That is it, or at least that 's what Jay pointed to when he was talking about the supercharger. I was looking through a viewfinder when he explained it, then he closed the hood. I wasn't about to lift the hood on Leno's Duesenberg to take a pic.

I've never heard of these before, and usually old cars (in the back of my mind at least) bore the living bejesus out of me. I know they shouldn't but they do. This though, this is different. I'm glad to have learned about these rides from Leno lol.

johnbezt REALLY?!? Not even knowing about Duesenbergs is like never having heard of Bugatti. Ferrari, or even Mercedes, or Packard. It's like True Classic Automobiles 101.

Sadly I'm sure you are not alone. It makes it easier to understand how guys can argue about a mass produced 100,000+ unit car being "classic" just because it's old, or cool. They have no idea what a true classic is, never mind understand the definition of the word.

Don't take this as a dig against you. I'm just amazed at how many "auto enthusiast/car guys" don't know about blue chip classic cars and what makes them such.

I live about 30 minutes from Auburn, IN where the Auburn, Cord, Duesenberg Museum is currently located in one of the old factories.  Absolutely worth the drive if you are within a couple hours.  Photos of these cars simply don't make the impression of the real thing.  They have more than just A,C,Ds too.  Checker, Lincoln, Cadillac, etc. Lots of really cool old cars.

GripHooligan86 Exactly what I was going to say.

Leno, if you read this please do a video on your youtube channel JUST on the supercharger in this car!  #nerdalert