SHARE A Hakosuka With A Massive Set Of… Cams

OS Giken is a household name, synonymous with some of the best engine and driveline products on the market for Japanese cars. But if you had to choose one specific part they are particularly known for, it would have to be their TC24-B1 twin-cam 24-valve head for the Nissan L-series straight-six engine – as found in various Skylines, Laurels, Zs and the like, during the ’70s and early ’80s. We’ve seen this motor in detail quite a few times over the years – especially the updated version they released a few years ago. Back in 2013 we drooled over the TC24-B1Z in all its oily goodness, and now at the recent Nostalgic 2days event in Yokohama, we see it fitted to their latest project.

They drove the car into the show, blipping the super-responsive engine, and people instantly flooded OS Giken’s display area wanting to get a closer look. I had to wait a couple of hours for people to move a little, just so I could get a few clear shots of what may well be the ultimate Hakosuka.

That casting really says it all!

This 3.2L stroked L28 produces more than 420hp and delivers that fury with the sort of soundtrack, response and character old race motors were so well known for in their heyday.

I really had to stand back for a second and take the under-bonnet sight in. This is the pinnacle of L-series tuning right here, and it’s presented beautifully in a simple, but oh-so-clean engine bay.

What makes it different from the motor we looked at a couple of years ago is that this one is running a sports injection system, all controlled by a modern day race ECU.

To get the most out of this unit you really have to subject it to a good old fashioned wringing, revving it all the way up to its 10,000rpm redline in order to keep it on the boil.

Another difference I spotted was the exhaust manifold design, again of equal-length style, but shaped a little differently, maybe to make it fit better in the Hakosuka‘s engine bay.

If there’s one thing I have to do this year, it’s to get a ride in this car – even if I have to drive all the way down to Okayama to do so!

Unlike the Tea Valley Hakosuka we saw in a previous Spotlight, I wouldn’t categorize this car as a resto-mod, as aside a few must-have suspension upgrades, it still very much takes an old approach given its TC24 head’s roots are in the ’70s. The interior, as you can see, has been beautifully preserved in its original state, save for a pair Datsun Sport seats and a few auxiliary gauges.

The kyusha scene is really showing no signs of slowing down, and with companies like OS Giken and shops like Tea Valley building these sort of cars, it’s quickly becoming one of the most interesting sides to Japanese car culture. 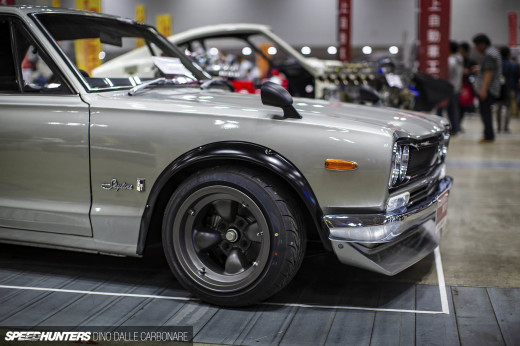 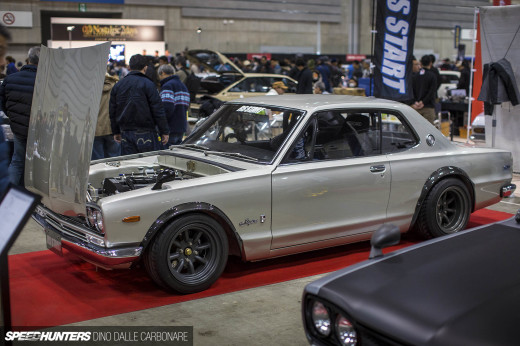 Keep Your GT-R, I’m Taking This!

Oh Mylanta, this car makes me weak in the knees. What are those seats?  They look similar to the early porsche/bmw scheel buckets.

a tear was just shed when i saw this awesome cover photo this thing is amazing!!!

It is cars like this that make me curse the ocean between Japan and I. My two favorite things about Nissan, an old school skyline and a built L-series, much mmmmm

That exhaust manifold is beautiful. That is a sentence I never thought I would say.

Feature coming up? Do we get a video? I neeeeeed to hear this.

you can't have an article titled "a hakosuka with a massive set of cams" and not have a video of it at least idling….. blue ballin mofos

Please feature this we need to see this on the street! :O

Very cool car. For those wanting a taste of what this sounds like here is a link for S30 the company was tuning.

I love the top cover picture.

just beauty..nice to see others still love the old ones..Header must be my favourite part..

Chris 'Haffy' Hafner Feature sometime this year for sure

missile Check out instagram @thespeedhunters for a short sound clip

Just an amazing car, the motor I want so badly in a Fairlady inside one of Nissan's greatest achievements... But, I can not get over that strut bar.  Horribly out of place and.... Nismo didn't exist until 12 years AFTER this car was produced it's just a sacrilege.

And it's not a nismo strut race it's a sticker on what appears to be a cusco brace. Oh well - fits the resto mod image. After all the head didn't exist till after the car was out of production and certainly the same can be said for the motec, etc

Is that twin cam for sale?

speedhunters_dino Chris 'Haffy' Hafner Good to hear!  Please get us some audio

@MyLifeAsLouis They make it again I believe, or at least the cylinder head, but it's something like 30,000 usd.

CadeJohnson Its the engine package and yes it is about $30,000 for just the long block.