The teaser images for the P1 GTR were outrageous really, McLaren knowing exactly the audience they were appealing to. The yellow with the green stripe, a direct nod to the Harrods-liveried Mach One Racing McLaren F1 that brought the marque their Le Mans 24 Hours podium in 1995 – a race where mould-breaking F1 GTRs also won overall. And finished fourth. And fifth. This was the car they showed off at the Geneva International Motor Show, a weapon fashioned for one purpose: maximum track attack.

For its final production flourish, the already blisteringly fast P1 has been hardened up yet further into a pure racer, losing the dynamic rear wing and gaining a gargantuan multi-element fixed unit mounted higher up on carbon uprights. It still retains some DRS-style dynamic elements, though obvious not the full Thunderbirds style of the road car pop-up.

The base car was pretty much a racecar anyway, so outside the wing there are few massive visual changes – but look closer and, as you’d expect, there are a plethora of detail changes. As well as the wing there’s a much larger front splitter, reshaped radiator ducts, side intakes and diffuser that have brought a 10 per cent gain in downforce, with the front track increased by 80mm.

50kgs have been shaved off the base weight though, with the power to weight ratio now up to 684hp per tonne from the M838T 3.8-litre twin turbo V8. The powertrain retains its hybrid element, with the V8’s output tuned up to 789hp supplemented by 197hp from the electric motor – an overall gain of 83hp, made more significant with the P1 GTR’s diet, race fuel and a major software re-map.

The wing mirrors have been moved onto the A pillars to reduce drag – plus they’re almost certainly more useable in that position – and the side windows are now polycarbonate.

The exhaust is a new Inconel-titanium unit with dual pipes, saving another 6.5kg whilst making the soundtrack even more ferocious.

With McLaren’s carbon Monocell still the base structure of the P1 GTR there’s no need for a rollcage – stiffness and safety are built-into the chassis.

The P1 GTR sits even lower to the ground, by 50mm, and the video above – released for Geneva – shows the P1 GTR racing around with its older F1 namesake. I love how it demonstrates that uncompromising, raw racecar stiffness, bouncing through the bumpy corners on minimal suspension travel, everything optimised for speed. The driver’s teeth must have been shaken loose… Imagine what a run round Sebring would do! Oh, to have been at the Nürburgring that day.

Up to 30 could be built, depending on demand – which let’s face it is likely to be high, despite the eye-watering near-£2m price tag. Even so, only existing P1 owners can even apply to buy one. Once the cheque has cleared, they’ll be given a focussed driver programme to cope with the car’s potency, allowing them to live a proto-F1 dream that even extends to a steering wheel based on the 2008 F1 car unit.

The sad thing is that this hardcore, track-only, brutal racecar will likely never see real competition, doomed as it is to a zoo-like life of meticulously controlled one-make races as and when McLaren sees fit. McLaren Special Operations will maintain and run all the cars they sell, similar to the Ferrari FXX programme.

This car, this work of racing art, should be racing its competitors out in the wild – its natural habitat. Who cares if it’s faster or slower than a Ferrari; the people who are going to buy these can buy whole planets if they want, so the results don’t really matter. Us, the passionate majority who will only see these cars from afar, want to worship these kinds of machines in the public temples they belong in: the Le Mans, the Sebrings, the Nürburgrings of the world. You’re with me, right? 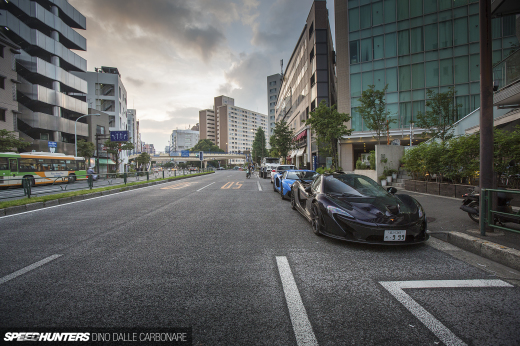 A racecar that can't be raced against others? Pointless.

I don't get these racecars for not racing. You could buy a lmp2 or a GT car and run a season for this price.

"P1 GTR on the Nordschleife with its older F1 namesake"


Actually, the location is Cadwell Park.

It rocks harder
It looks better
It goes faster
It ... umm , was it even have stronger chassis than regular P1 ?

@Frozenstar Yeah boo, I don't like amazing cars either! Oh hang on*

Yes I was being sarcastic, sorry. At the faintly fantastical level which this sort of thing exists, reality is an often warped vision!

Vittorio Jano Or a house, a small village in Spain, a fleet of new C7 Corvette's for you and your friends. It might not make any sense, but until I have to make that decision myself I'll just revel in the fact manufacturers keep doing things like this.

Its a nice piece of plastic, but whats the point of owning one for gazillion on mony if you cant race it properly?

Speedhunters_Bryn Vittorio Jano was that a Mr. Deeds reference? Or were those vipers?

Matt Khoun how many points do you get for your picture lol.

I thought the FIA had a club series featuring hypercars from the Aston Martin One-77 up.

LavarBowers because you're in the market, right?

As opposed to those affordable race cars that currently (and have forever) dominated the marketplace?

No you can't - and even if you ran an old car you certainly wouldn't be able to attend all the events with the required staff and spares, nor would you be competitive if the cost of the car here was your complete budget.

Same can be said for any of Ferraris XX offerings, or Astons entry. Does it matter? Were you itching to buy one to run at LeMans and now you can't? Enjoy it for enjoyments sake,nits a special version of a special car by a highly specialized manufacturer. It's not prentending to be anything else, so why try to choc it in as such?

Speedhunters_Bryn roblo97 Hehe, what an error! That really was me not paying attention – and just expecting that EVERYONE 'must' use the 'Ring. Of course, Cadwell; as Bryn says, the UK's Nordschleife! Apologies!

Such a shame to not see this car racing. I get that they make money from this, and the super rich want to buy their way in to some sort of exclusive racing club where engineers turn up, wipe their arse and teach them how to drive. But for me it detracts from the efforts companies like Mclaren have put in over the years to become the racing team that they are. I want them to be racers at heart, companies who enjoy the competition regardless of the cost or who wins or loses, it's the fight that counts. Its watching companies like Mclaren or Ferrari or Porsche compete and fight with each other out in the public eye that endears people to the brand in the first place, it's the reason there's a million kids out there right now that want to grow up, get rich and buy race cars; race cars like this one. Not letting it compete ruins the whole process IMO.

@Revtil9k it's just weird. not much needed to use this in a proper racing series!

All well and good except you act as if McLaren doesnt already compete at the highest levels of Motorsport. So how does a limited run of a limited car not racing detract from their lineage, or brand? There was a time not too long ago where they didn't make any road cars at all. The evidence doesn't support your thesis.
Have you been to any of these supposed ass wiping days? No had the fortunate experience of going to a few as a guest, both porsche cup, Ferrari challenge events and one XX event. The guys there have tons of money no doubt, and there is a lot of factory support (part of e program), but they are having as much fun as a guy running any it her track day event. It's the same thing at a higher income level. Don't be so quick to put your preconceptions on something till you experience it.

It's good marketing, a good chance to capture sales of multiple cars to existing owners, and further development. It makes total sense. I only wish I was ever fortunate enough to afford any of them!

I'm sure the P1 "goes" better, but the F1 looks and sounds better. On top of that, it was an actual balls-out, come-at-me-bruh racecar thundering across tracks worldwide in open competition


Oh, how the mighty have fallen...
The audacity to show this upstart next to the legend it will never live up to...

I would like to see pictures of under the car to see the front & rear difusers and the active aero. It seems that everybody that has make a review of the car talks about it but no one has seen it or be able to take pictures.

Very beautiful car. And the specific livery is my favourite.

Just when I thought they couldn't get meaner...love these cars!

Could not have said it better than the way you put it in the last paragraph. Excellent, albeit disappointing, article.

Whats the only thing cooler than a McLaren P1?  A McLaren P1 Racecar!!!

@Revtil9k  "nor would you be competitive if the cost of the car here was your complete budget."
Word.
See, here's the thing: Say I bought this car. Part of the purchase is basically the same mix of crew that's helping Alonso and Button in F1. My car is more powerful, is more advanced, and yet safer than an F1 car. Analysts that look at F1 telemetry will be the one telling me how well I drove using maths, while there will be a special coach telling you where you did well and how you should take the U-turn in Monaco next time you roll there with your 'Nilla P1 or something like that. Also part of the purchase is an all-access pass to Woking even Bryn will have to pray to get, as well as a bespoke experience in the tracks in the program's itinerary. And even the parts--have a breakdown or a crash and they're gonna fix the thing for ya.


What you get for your money is enough to justify the cost.

Speedhunters_Bryn Vittorio Jano Yeah, of course it's about personal preference, but with all the references about their racing heritage I'd say that racing is a bit more relevant alternative for this McLaren country club than buying a Spanish village (I think you could get a whole town nowadays :D). Maybe it's just my competitive nature or my utter disdain for 5 star pampering, but to me these kind of exercises seem ridiculous compared to proper gentleman racing. Just my two cents.

kudason Vittorio Jano Of course motor racing started of as a sport for the rich folks and it still very much is just that and I have no problem with it. Usually gentleman racer refers to a rich guy who funds the team and in endurance racing also shares the car with a young talented driver. Somehow i prefer that kind of approach to motorsport to these all inclusive driving days by Ferrari and now McLaren.

It's a GTR. Click here if you want the McLaren P1 GTR.