You just can’t beat a good local show, and 16 years in there’s no denying that Severed In The Southwest is one of the best there is. I used to drag my minitruck through this same parking lot in my teens, so it’s been a blast to revisit the scene these past couple years as a Speedhunter.

Last year I brought the Double Down RTR I had just built for the SEMA Show, since it was bagged and all. Knowing I only had the car for a limited time I chose to show it over my own FR-S or Kaiser, but this year I had to bring out my FR-S. For one, they have a Scion class I wanted to compete in, plus I had just installed an Air Lift suspension. More on that later.

The bagged Volvo sitting next to my car belongs to a friend of mine, Keith Ross. You’ll notice his photos sprinkled throughout this story too. He’s a pretty talented guy.

Our two cars sitting side-by-side is actually a nice representation of what Severed In The Southwest is all about. It’s ‘run what ya brung’ and cars of all types are welcome.

Let’s not forget that this started out as a minitruck show though, so almost everyone there was a minitrucker at heart.

I’m also struggling to call this a local show anymore as people seem to be venturing from further away each year to attend. I even spotted the familiar Stone Fab work truck from central California that Mike featured earlier this year.

In a scene that probably doesn’t click on Speedhunters much, it was cool to meet a few avid readers too.

There were the token bedless minis and their full-size counterparts. This was all expected and appreciated just the same. To be honest, I’m right at home surrounded by frame-dragging machines like these.

A few guys have ventured into more difficult projects, like this body-dropped Pathfinder.

Another trend I touched on in my coverage last year is the number of slammed luxury cars in this scene. It’s not VIP at all, more like minitruckers who have grown up and want more car, but still have to modify everything they touch.

This wagon was especially cool, but I didn’t catch whether it was riding on air or hydraulics.

You might be surprised by how many of these cars are riding on hydros. With the use of accumulators and a solid installation, they can function and ride very well.

These aren’t the leaky old pumps in your uncle’s six-fo’ Impala either. These guys have it dialed in.

And you might be downright shocked when one of those chassis-dragging cars rolls by pulling a three-wheel.

I think we may have stumbled into some microcosm of a trend here. What do you think?

This flexy TJ wanted to get in on the fun too, although it cheated and used an articulation ramp.

There was some serious machinery on hand this year, including ‘Chevy Only’ Dino’s latest pro street effort. This guy only builds Chevy trucks, and he’s become pretty good at it.

It’s been clear for a long time that Chevy trucks from the ’60s and ’70s are considered classics, but lately the square bodies have been gaining in vintage status in too. This one’s actually a rare two-wheel drive K5 Blazer.

While the majority of vehicles at Severed In The Southwest were hammered as close to the ground as possible, there was still room for a nice resto too. I could smell the carbureted fumes as this one rolled by, leading me to believe it’s still mostly original.

When I saw this little Datsun Roadster I figured it was just a clean weekend car for somebody.

I’ve always been intrigued by how different a ’40 Ford can look depending on the stance and chop, or lack thereof.

This one was beautifully finished, inside and out.

Another car I’ve long lusted after is an early ’60s Thunderbird, and this is almost exactly what I would do with it. You can’t beat the styling of these factory customs.

Even though this is considered a minitruck show, there was no doubt that classic cars were more than welcome, no matter the flavor.

Besides, there’s nothing wrong with a little cross-pollination of scenes to get new ideas for your own build.

And then there are vehicles like the Chevy truck that I opened this story with, which easily bridge the gap between minitruck and hot rod.

In the battle to be the lowest, it seems like some vehicles are built right around the rolling stock.

Pop the hood and all you’ll see is an engine and two tires.

Some guys get close, then weld in some custom inner fenders to protect the engine bay from road grime.

But there comes a point where there just isn’t enough room for even a thin piece of sheetmetal.

This used to be considered extreme, but is becoming more and more common as the scene progresses.

Sometimes the limiting factor is the hood itself!

Various forms of bed floor-raising and cutting are employed to make room for the suspension and tires that will inevitably be needing room.

Of course, until the bed’s done a lot of guys just roll without it.

Another minitruck trait that you don’t really see in other scenes is the use of exposed suspension components. It’s really due to packaging restraints, but at the same time I can’t help but feel like I’m looking at a modern hot rod.

See what I mean?

No body style is off limits, as we have seen from the cross section of vehicles at Severed In The Southwest.

What started with a minitruck for many of us, soon made its way into all sorts of other vehicles.

A body-dropped Suburban might be good for hauling your family and friends.

These guys are finding ways to dump late-model cars too, usually involving lots of modding and cutting.

Whatever it is, the mission is clear: get that thing on the ground.

Keith and I had a great day shooting and were just about to pack up our camera gear when we heard his name over the loudspeakers. Turns out he had won Best Import, and meanwhile I snagged first place in the Scion category too! Not a bad way to spend a Saturday.

Thanks to Joe Molina and Severed Ties for having us out, and for continuing to throw such a fun show. I just wonder what I should bring next year?

Severed In The Southwest 2013 coverage 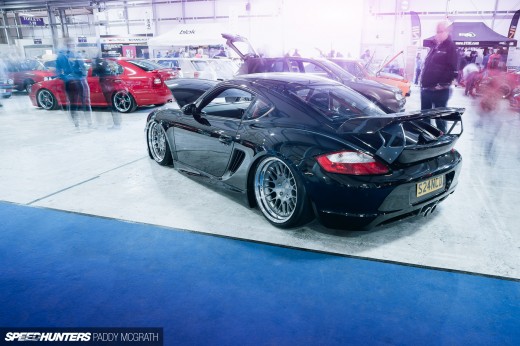 Not a big fan of the new stuff but give me old school pickup trucks(30's -60's) any day.
Especially the Ford, clean.

What lens(es) did you shoot with?

Keith that's some great stuff there.  I'm a minitrucker from way back in the day.  And dude Severed has been serving it up for some time.  Man these are some cool pics and rides.

Former mini trucker here. I'm sold. I'm coming to Severed from now on. Also, let me know if your neighbors move out--we could build some crazy shit for next year! Hahaha. Great stuff Keith, thanks as always!

That hot rod with the gear shifter on the outside is just nuts, the pin-stripping and gold digger emblem are just too cool!

I've never been a fan of the minitruck scene, and I'm still not sold on it, but I can respect the hard work and dedication it takes to make those trucks sit the way they do. I guess it's because I'm a form > function guy. Otherwise, great photos!

Pedro Gonz plenty over at stanceworks.com

I'm obviously quite partial to the c10's. Sino is an icon in the c10 scene and his prostreedt build is a monster.

Also the owner of the grey c10,Ed , just finished huiing it and is winning awards left and right

Man, that is not far from where I live. Sad that I could not take my family to see this. When will this show be here next year?

@Fresh_v It's always early December. If you look on Facebook or just Google it you can find the info.

Dill Pickle Keep in mind that a lot of these guys got their start modifying cars with a mini when they were young. Almost everyone does their own work and it's a gateway into welding, painting, electrical, etc.

smithadamb We need to feature it, don't we?

shiftyXTI Yeah we all noticed that shifter right away, then the conversation turned to all the ways it could get hit by something going down the road. Or maybe a rogue biker could pull up and shift it into neutral?

AndrewTaylor Thanks, see ya there!

WilliamFreeman Pedro Gonz Loved this thing. In hindsight I think it might have been my favorite of the show.

That T-bird is so good looking! I want one bad.

Keith, I have to say you post some of my favourite articles on Speedhunters. Also, always been fascinated by the minitruck scene. We don't have any kind of minitrucking scene, so it's always been interesting to me, mostly because it's unfamiliar territory. Many of these are really cool! And it looks like there is some incredible amounts of work put into them. Would love to maybe see a feature on one of these Trucks!

Great coverage, every car in this post is killer!

That Thunderbird is incredible.
I suppose it's not in Keith(s) we trust.

That pick-up in the fourth picture is looking absolutely amazing.

KeithCharvonia
My fave thing you posted and it was a tough lot to pick from.
I love the truck scene. There's not much of it here in the UK, well not quite the same - I remember reading about it in Truckin', my old man would buy it when he had his 1992 454SS.

Ha keith and keith , followed the amazon build thread and saw the stancworks feature it's an amazon car
(Great joke )

DaveT And it didn't take a lot to make it incredible! This is why I need one.

speaks Thanks, glad you enjoyed it.

BastienBochmann Maybe you should START the minitruck scene in Germany.

KeithCharvonia DaveT Supremes (or perhaps cragars can't quite tell) and whites is a winning combo. Personally I'd add a flaked roof, but that's because I'm in love with flaked roofs!

KeithCharvonia That would be cool, hah. Maybe one day when I'm done with my other cars.

I'm not trying to be mean or degrade anyone, I've just never liked the style. I know for sure that they've put probably 10 times more work into their trucks compared to mine.

Never thought I'd see not one but two 22RE's on speedhunters.

That big ol' patina'd Bell Air in the bonus pics making a turn is badass, would love to have a big body chevy like that, love all these old trucks too. Imagine if volvo, bmw and some other european companies made trucks that were in this style back in the day...what if bmw and merc made trucks at all.. :0

3-wheeling benz=WRONG idgaf what anyone says... =/

That photo of the jeep and the man staring at it made me giggle. That stance made me think it was flirting with me; like a pin-up girl with one hip jutting out, looking back and blowing a kissy face.