SHARE The Meat In A Hell Sandwich: A Tale Of Triumph & Misery

The Art Of Competition

The competitive nature of human beings is visible in all walks of life, and we observe this regularly while Speedhunting any form of motorsport.

What fuels competition in racing, though? Is it the anticipation of the chemical rush in your brain when you stand at the top of the podium? Or the lure of another addition to the trophy shelf? Well, if nothing else it certainly seems that the harder the goal is to achieve, the fiercer the competition will be.

A race that lasts 24 hours is the ultimate crucible in which to boil up the ingredients of competition and try and discover at least some of the answers – or for us to at least experience the travails competitors put themselves through in the process. Day-long races are absolutely the most gruelling events possible, pushing the limits of endurance for both man and machine.

So the 24-hour race on Germany’s legendary Nordschleife? Well, it’s basically a subject lesson in human behaviour that would send most psychologists mad.

You see competition in its rawest form. At the Nürburgring you witness obscene levels of bravery and persistence and what can seem like utterly futile resistance against nature’s apparently inherent dislike of machinery going on hour after hour, long after anyone sensible would – should – have thrown in the towel.

Every emotion is put through the wringer over the 24 hours – and often contemptuously spat out by the ravenous Green Hell. The other racers on track are one thing: the thing that everyone is competing against is the track itself.

It’s no surprise that teams gravitate towards the infamous Nürburgring and its challenge, and the names of teams that operate in its vicinity are written in motorsport lore: Manthey, Zakspeed, Black Falcon… Now there’s a new team on the block: the Meatball’s team.

Meatballs? Only in Germany… Frikadelli – regional slang for meatballs – was the nickname given to local butcher Klaus Abbelen, and he adopted it for the name of his racing team as his part-time passion grew into a professional squad aimed squarely at conquering the Nürburgring. The car even carries a meatball sticker on its flanks – no wonder it’s such a popular car with the fans!

Tackling the Green Hell isn’t for the feint hearted, so for the 2014 season the Frikadelli Racing Team came well-armed and well-prepared.

Knowing that having a car sponsored by beer and meatballs might be appropriate enough for the Nürburgring but that the racing gods would demand more, for 2014 Klaus lined up in his Porsche 911 GT3R alongside Carrera Cup specialist Patrick Huisman, Porsche factory driver Patrick Pilet and a lady who’s knowledge of the Nürburgring has become almost as legendary as the track itself: Sabine Schmitz, the ‘queen of the Nürburgring’.

Sabine has been driving around the ‘Ring for as long as she can remember and knows the place like the back of her hand. It’s one of the key skill sets a racer on the Nordschleife requires to stand a chance of completing a lap, let alone the full 24 hours.

That might be an easy task on most tracks where there are just a dozen or so corners at most to remember, but the Nordschleife boasts over 25km (15.5 miles) of asphalt spaghetti, and allows for a starting grid of nearly 200 cars.

On a track that separates the men from the boys, Sabine amply demonstrates separating the great from the merely good. She’s been a long-term part of Klaus’ team, also competing in the mini-enduro VLN national series at the Nordschliefe that takes place year-round.

One of the team’s key partners is KW Suspension, on hand to try and help the team’s Porsche cope with the tortuous track conditions and learn from the battering the systems receive. If there’s a track where you want to develop suspension, they don’t come much tougher than this…

Thanks to the a series of good results in the VLN races that led up to the 24 Hours, the Frikadelli Racing Team had already secured a spot in the coveted Top 30 pole position run-off.

This meant that the team had enough time through practice to further fine-tune the setup of the car rather than hurrying to set a good time.

Following a sensible run in the shoot-out, Patrick Huisman had earned the team a respectable 22nd spot on the grid – the second-highest qualifying 911 amongst a gaggle mired towards the end of the Top 30, all of whom weren’t happy with the performance balancing assigned to their cars.

However, at Frikadelli everyone was in good spirits. The car was set up just the way the drivers wanted and the weather was beyond perfect. This weekend would eventually turn out to be the first time in nearly a decade when it wouldn’t rain during a 24-hour race here.

Great drivers, great sponsors, great weather, an ideal start position towards the front of the massive grid. What could possibly go wrong?…

Hell Is A Bad Place To Be, It Turns Out

Porsche works driver Patrick Pilet was picked to deal with the opening stint. Skilled at navigating through heavy traffic, it would be his job to try and chew through as many of the couple of dozen odd cars in front of him and make up positions during the opening hour.

They say luck is for the unprepared, but I’m not sure what accounts for bad luck. Even for a team this professional, sometimes all those months of preparation can be instantly nulled thanks to technical gremlins.

Right away during the opening lap, Patrick noticed the temperature gauges shooting off the scale due to a coolant hose snapping under pressure. This resulted in an unplanned pitstop for the fan-favourite 911, which immediately cost the team three and a half laps.

Following a quick repair Patrick was once again back out on the track and out for blood.

After a second stint he handed over to Patrick Huisman, and between them they’d begun to pull their Porsche back up the order.

Lap after lap, slowly but steadily, they climbed all the way up to 35th overall. Things were looking good: a solid result was still possible.

The luck was short lived when Patrick Huisman radioed the crew with more bad news. The front right tire had disintegrated and the car was limping back to the pits.

Fans and ‘Ring regulars were all baffled: they weren’t used to seeing the Frikadelli Porsche in the pits this often…

With each passing second in the pits, so the 911 lost precious time.

The team pulled a stellar job and had the car back on track in no time, losing just one lap in the process.

Despite the torrent of misfortune, the team was still in good spirits. Perhaps already things were at the stage where the race had changed for the team: the competition really was now the track itself.

Unfortunately for the team, even more bad luck was in store when one of the ABS sensors failed soon after and the car had to be brought back into the pits yet again.

Following a thorough analysis of the car, the team discovered that one of the wheel bearings had broken.

Repairing this would have costed the team another handful of laps and would have taken them completely out of contention, so they regretfully were forced to retire the car.

At this point, Sabine hadn’t even started her stint. In life, decisions are mostly split between those that are rational and those that are emotional.

To pull the car out of the race was the rational decision here. But what about emotions? For a seasoned driver like Sabine, or for that matter any racing driver, the emotional baggage of dropping out of a race this important is quite massive.

So what fuels competition? From what I see, it is at least in part a ton of frustration and anger. And even though it was held under wraps the entire time, there was no shortage of it within the Frikadelli Racing Team.

Little wonder that just two weeks after the Nürburgring 24 Hours, during the fifth round of the Nürburgring VLN race, Sabine took out all that pent up anger and frustration by overtaking 40 cars within two laps. She ate through the entire field until she got to first position, where she stayed to the end of the race.

After the race is before the next race… Here’s to a brilliant all-day and all-night tour of the Green Hell in 2015.

The 24 Hours Of Nürburgring In 24 Pictures

Godzilla In Germany: An R32 GT-R At The N24 Classic 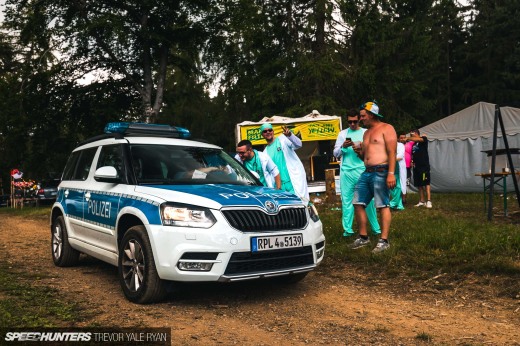 From Brünnchen To Wippermann: The Fans Of The Nürburgring 24 Hour

Makes me think what could have been possible during the 24 without all the bad luck. Next
race is on august 23. Fingers crossed for three in a row. I´ll be
there, but maybe i won´t be able to see anything due to some tire smoke
which may possibly rise from the "Müllenbachschleife"!

See you there,
alok?

Good to see Sabine again, doing her stuff. Clarkson, still believe that you can beat her? :))))

Great article and pictures Alok and Sean! Loved the video.

That woman is a living legend.

Option13 Probably KW, as it looks like Bilstein sponsors the race and each car.

Sabine is really amazing behind the wheel what more can you say?  That video was great!!!

To call Abbelen a "local butcher" is a bit of an understatement... you can buy his meatballs in most German supermarkets. One could also mention that Sabine is not just his team-mate... and a certified lunatic. I went to a VLN race late last year and she really flew through the "Flugplatz"-section... literally! ("Flugplatz" means airfield in German. The part of the track is called that way not only because there was an airfield nearby years and years ago, but also because the cars tend to leave the ground with all four wheels when they hit the crest. Standing next to it, you can hear that most drivers lift off the throttle (in order to spare the car and stay in control). Sabine buried it.)

By the way, here is a much better quality video of Sabine overtaking. She's awesome!

Really enjoyed this nurburg race coverage, yeah it had some sponsors but it was interesting. Much better way to advertise than the Vossen bagged stock wagons!

Was a Link by Mike Frison's 20832.com. Really good written and great fotos, many thanks. Sabine is really the "Nordschleifen-Königin". Good Luck an alle the Best furthermore.

Was a Link by Mike Frison's 20832.com. Really good written and great fotos, many thanks. Sabine is the "Nordschleifen-Königin". Great Luck and all the best furthermore.