I find it interesting how air suspension seems to taking over the stance scenes around the world – especially in Japan. VIP rides wouldn’t have been caught dead riding on air a few years ago, but lately these systems have really made a good case for themselves. Sure, the diehard guys would rather scrape their bodywork around to make a statement – and that’s all well and good – but what’s wrong with embracing what technology gives us?

This is the reason why most of the cars that come out of Takemi-san’s Lexon workshop in Sagamihara – including the IS350 F-Sport I showed you at the beginning of last week – are fitted with some sort of air ride system. The same goes for their very cool Lexus GS350 F Sport that I wanted to share with you guys today.

The GS runs a full Lexon carbon fiber aero package that adds simple – but very well integrated additions, to the daring design DNA that Lexus has worked into its entire current line up.

The front spoiler follows the contour of the F Sport bumper and protrudes in all the right places to accentuate the big sedan’s face, while at the same time adding more sports appeal.

Takemi-san likes to play around with different wheel configurations, but as I mentioned in my recent Lexon LFA feature, for Wekfest Japan he decided to outfit each of his demo cars with Vossen wheels. For the GS350 Takemi chose the VFS-2 with Vossen’s Matte Graphite finish, measuring 20×9.5-inch up front and 20×10.5-inch out the back.

The deep concave design and colour of the VFS-2s is a really good match for the overall look of the car – and especially so when the Air Runner suspension is dropped to its lowest setting and the wheels tuck deep under the arches. More Lexon touches follow on the side of the car with the carbon skirts.

One of my favorite pieces of the Lexon line up has to be the subtle little carbon roof spoiler. It sort of reminds me of similar items added onto drift cars – perhaps a nod to the sorts of cars Takemi-san used to work on back in the day.

The GS is completed with a rear diffuser section and a quad-tail Lexon exhaust system which adds a little rumble to the 3.5L V6 engine that powers the car.

So that makes it two luxurious Lexus sedans and one screaming V10-powered supercar from the guys at Lexon. As subtle as what Takemi-san is doing with these cars, the impact is large and I look forward to seeing what he comes up with next. 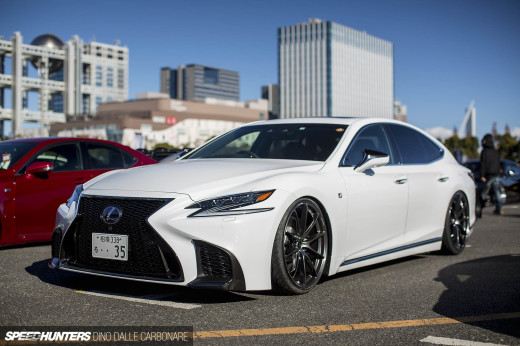 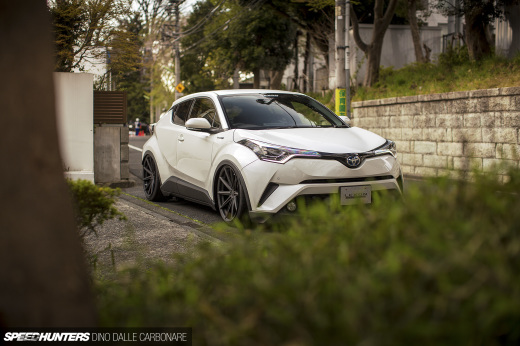 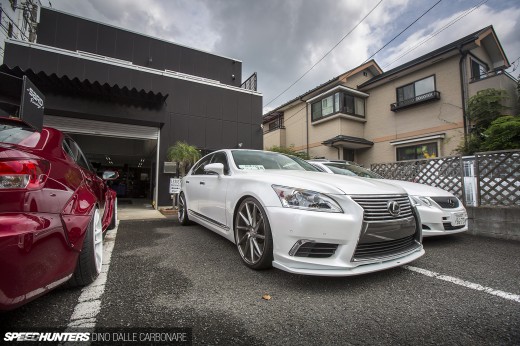 Could you also please show us some pics of the car when it's in its riding height? Would be interesting for me, since these air suspensions practically don't exist where I live.

I really like this stance air suspension trend, never got what statement one is making by getting stuck on a tiny speed bump, but maybe I am just too grumpy to understand. Lexon body kits are subtle and elegant, just checking out their website.

So Dino, are those wheels concave or convex?

This is just like the previous Lexon car.  It's clean and low, yeah... but I don't really care for the air suspension thing (there has been a tonne of it lately for some reason).  I appreciate the effort that goes into the articles, but please show more other content.

I think you might've forgotten to hit the back button. I'm pretty sure if you go back to the main page, you won't find solely 'Stanced' content. Speedhunters throws out a multitude of articles appealing to a bunch of appetites every single day. Just because this article and a few others are what's most prominent in your mind, doesn't mean you have complain about it. Just sayin....

H8RADE You will find an increasing amount of stance content, however. That much is obviously clear. There's very, very few websites that cater to cars built in a more "functional" style, and SH used to be one of them. Now, their posts are probably 40%-50% stance. I could understand one post every once in a while to "see how the other half lives" so to speak, but it's getting silly now.

someone take this engine and put it in an 86

Please don't tell me, you guys are using that whole meme.... Please no...

Speedhunters_Bryn H8RADE @Jake Laird I'll give you 1.5/14 on the current home page, that's 11% stance generously.  And if we are splitting hairs here, which it seems like we are, "how the other half lives" would imply 50% of the car enthusiast population...Some would say this justifies 50% of all articles on SH to be stance related if their hearts so desired.  However, using my previous maths as evidence, this doesn't seem to be the case.

40-50%? I really suggest scrolling through the home page. If you use these wonderful things called eyes, you'll notice, aside from event coverage, the last time a feature was posted relating to a stanced car was back on May 28th. Almost a week ago. Now, I'm not gonna start getting into minute details or arguing with you, I'm simply making a point that posting 1 or 2 features over a week span does not equivalate to you aforementioned 40-50%. Formulate your own opinions instead of spewing out regurgitated hater nonsense you've seen posted on here in the past... Just sayin

Someone should shove an Ls1 in one of these one day

Really love this spotlight (and the ISF350F as well). Subtle, but genre-bending, and yet functional and overall perfectly executed. Why choose SH? Because this. Thanks Dino!

I really like what this company is doing. While many are making VIP cars overly aggressive, Lexon is working with subtle sporty upgrades that add just the right amount of attitude to late model cars. I haven't ever been a Vossen fan but it's hard to deny when it comes together like this.

Will you be stopping by any of the JDM Lotus tuners this year Dino?

Im really sick of all the Vossen wheels. I really do like them, but it seems like every other car I've seen on here lately has some kind of Vossen wheels attached to it.

aussieANON , TOM'S did it , but didn't connect it .

I'm liking these brief articles. Nice car too, first one on vossen wheels I personally like

prazzi Spotlights are always good to spice up the rest of the other content we put up:)

FreelandMcNamara Yes I will be:)

@originalgarage Yep, just wish they offered products for other brands too

LukeEVOLUTIONVIII A 2JZ would do me just fine

RDS aussieANON Yeah wonder what ever happened to that

Hotcakes They are round

i haven't seen too much about the gs. im glad that there is aftermarket support now for this model! i really want to trade up to this. i can't wait to see what else lays in the future of this chassis. im sold.

@Jake Laird H8RADE You know that every car technically has its own 'stance' right?

Ummm... i´d like more agressive image, but it´s a nice car, but in my opinion too simple