The power of love

As I mentioned in yesterday’s post, Toyotafest has one of the interesting and diverse selections of vehicles you’ll ever see. It doesn’t matter whether you are a fan of the brand or not, I’m pretty sure everyone can find something to like. With that said, here are six of my personal favorites from the weekend’s event.

This is heavy. What you are looking at is a perfect replica of the Toyota Hilux pickup that Marty McFly drove in the movie Back To The Future.

While this isn’t the exact truck used in the movie, it looks exactly like it, with all the correct details accounted for.

For starters you’ve got the correct wheels and tires and the KC lights sitting up top. The push bar on the front is also completely authentic to the one in the movie.

Although Marty’s 4×4 might not be considered one of Hollywood’s most iconic movie cars, there wasn’t a single person who didn’t recognize exactly what this was. I’d say it’s just as cool as the DeLorean BTTF replicas out there.

Along with rows of Celicas, Corollas and other more popular Toyota models, Toyotafest also includes a lot of the more obscure Toyota models, many of which have disappeared from California roads. This 1975 Corona Coupe is very much one of those cars.

I was initially drawn to this car based on rarity – but as I got closer I became even more impressed with what I saw.

The exterior was perfect, and almost completely original. The only real change is under the fenders, where a set of Panasports with nice meaty tires now live.

But it really gets good under the hood. Not only does it have a twin cam 18R-G swap, there’s an old school HKS turbo kit added to it.

I’ve been able to attend a lot of classic car meets in Japan and even over there I’ve never seen anything like this. Such is the rare treasure you find at Toyotafest.

Why not do it with some style?

For being a great looking, lightweight, turbocharged mid-engine sports car you’d think the SW20 MR2 would be more popular than it is. It does appear as though more and more modified SW20s are starting to pop up at events like Toyotafest.

This one was quite aggressive with a matte orange finish, crazy wheels and some wide body work.

Some would say that the whole bolt-on over fender thing is getting overdone, but I think the raw look suits the MR2 well.

It also helps that this car is wearing a particularly badass set of 18-inch Work Equips with enormous lips and flat white centers.

It also looks like there’s plenty of bite to back up the bark, thanks to the large Precision Turbo turbocharger outfitted to the car’s stroked 3S-GTE.

The Toyota Prius is a car that gets a lot of hate from red-blooded car enthusiasts, but personally I’ve got nothing against the wedge-shaped hybrid. In fact, I like any car that’s built to do a specific task and do it well – and the Prius certainly does that.

I also think the Prius can make a pretty cool looking cruiser, and the builder of this example took things to a new level with a full-on luxury VIP theme.

As you can see, it sports a rather dramatic exterior makeover with an Aimgain Lexus-style aero kit and some cool one-off wide body work.

Further adding to the VIP look are a set of large diameter Avant Garde wheels tucked under the hybrid’s custom fenders.

Let’s not forget the interior which has been totally refinished in red leather with all the bippu toys. If you are going for a comfortable and cool looking cruiser, why not get 50mpg while doing it?

Gotta get back in time

Next up we take a trip straight back to the 1980s with this badass second generation Supra. This is throwback tuning style at its best.

The angular body is wearing an old school Erebuni kit, with the white paint set off by some subtle ‘Celica XX’ insignia down the sides.

The wheels are 16-inch Epsilon mesh and they further complete the retro street tuner look.

Inside we’ve got a mildly upgraded interior, set off by a pair of vintage Recaro buckets for both the driver and passenger. Don’t forget the Recaro upholstery on the door panels either.

The only modern touch I could find is in the engine bay, where a 1JZ turbo swap has replaced the Supra’s original 5M motor.

Last but not least, we have one of my favorite cars of the show – and also one of the most unusual. It’s a 1989 Camry and not only is it extremely clean, it’s one of the coolest sleepers I’ve seen in a while.

If you do see a Camry of this vintage on the road today, chances are it’s going to be beaten beyond return. Not so in this case. This one is in fantastic condition.

Not only that, but this is an All-Trac model, meaning it came equipped with the AWD system similar to the one used on the Celica.

But the owner of this one has got once step further and installed a complete 3S-GTE engine and drivetrain from a 1995 Celica GT-Four.

Yes, it’s basically a GT-Four in a four-door Camry wrapper, and that makes it completely awesome.

I never would have imagined that one of my favorite cars at this event would be a Camry, but that’s exactly what makes Toyotafest so much fun. 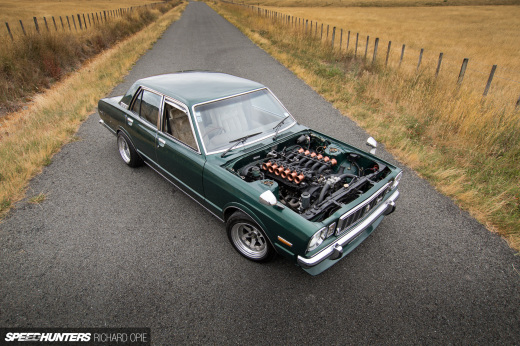 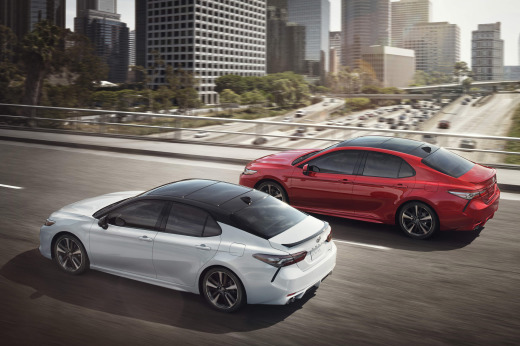 Can The Camry Be Cool? Toyota Starts Afresh

That truck! I'm a 4-door whore, myself... So, this truck is pretty much the only one I've ever really loved!!

What's a Hilux? this is America bro. We don't have those.

That truck! Wanted one when I first saw it in the movie, kudos to the owner/builder.

I wait all this time for SH to feature an SW20 and it's just another hard-parker?

Another killer selection, sir. OVERFENDERS ON EVERYTHING!!! I ain't complainin'. Also: Priuses (Prii?) rock.  But i've got to go with the Supra as my favourite - those wheels. And is that a colour change to black on the rear end? Clever.

nickmmele They sold the Hilux in America bro. Ever heard of a Toyota pick-up?

Your pictures and captions sent goosebumps down my spine. This is heavy doc! Thank you and everyone. Time to make like a tree and leave.

Everything about that Corona is so utterly perfect.  Feature please, Mike.

I wish they moved this event later in the year in summer, always wanted to attend this. One day!

That Celica Supra is perfect!

I'd love a drive in that camry

We call them Tacoma here in the state's, same thing though

jcali Yeah, it's pretty much been a May thing since the beginning.

Slappy Pistons I'll look into that!

kphillips9936 Yeah, I dreamed about almost as much as the Delorean.

good to see 4x4s getting more love on speedhunters. That MR2 is sick too. I thought it was perfect till I saw that poorly attended to bondo under the canard on the driver side. I'd still drive the heck out of it though

I was so glad Marty's truck never met any sort of ill fate in  the movies.
Great post.

Cool cars, but for me the Supra XX/Celica is the coolest of them all. Like an AE86, only way better

I'd love to see more of the cool 4WD's that toyota has to offer! Great coverage!

What is up with the belts hooked up to the a-pillars? that has always confused me when I see it in pictures

JoshuaWhitcombe  They are automatic seat belts. When you sit in the seat and turn the key they slide along the roof until they're at the regular position. This means you never have to buckle your seat belt and you also can't go without it.

Haha this guy gets it ^
I know what a hilux is. Pre-tacoma are just referred to here as "Toyota pickup" which I always thought was lame.
Any way. Just thought id pick on semantics.

Tell me about the reflection in the main article picture lol

"CHECK OUT THAT 4X4!!!" Everything was going great in Marty's life till the Doc showed up in the Delorean and started pouring Miller Highlife in the Mr.Fusion. . . .   If I was a judge at TORC Fest, This woulda taken "Best in: WORLD!"

also I'm hugely jealous that you got camry all-tracs

close to mcfly's pick up, but the years are off. the one at toyotafest had an independent front suspension while marty's was an '85 solid axle. toyota axe'd the solid front axle after 1985.

85 extra cabs are hard to find in decent condition. This will do

That Hilux is way too clean! Get it off road before the show please!

JackRusso  Then get it an ugly brother/sister that is allowed to get dirty... If you are looking for one, then come to South Africa! We have around a million of them!

Plenty of rigs ready to get dirty over here. Give me some time.

RacingPast Marty was more into the streets and cruising to the lake ya know?

I tots read that title in Biff's voice...

BrandonCampbell  Lol i saw it two!

nickmmele  About the same as calling an Acura Integra a Honda. Technically you'll be right, but it just comes out wrong for the ears used to it being called an Acura.

@Taz JjCruz  yeah but here in the US they discontinued after 85.

Hilux, Celica, "GT-Four Camry"! This is too awesome to be true!