Last year, the Initial D manga series came to an conclusion, marking the end of what’s surely Japan’s best-known racing comic. And while the main story might be wrapped up, it appears the series has plenty of life left in it. This summer, an Initial D animated film called Legend 1: Awaken will be released in Japan – and as you’ll see in the trailer, it appears to go back to the beginning of the ID story.

While the trailers aren’t super clear as to what we’ll be seeing, the idea of Takumi’s origins retold with modern technology sounds pretty cool – especially considering how dated some of the early episodes look today.

Knowing how important this cartoon and comic series has been in our lives, we’ll be awaiting this with great anticipation. 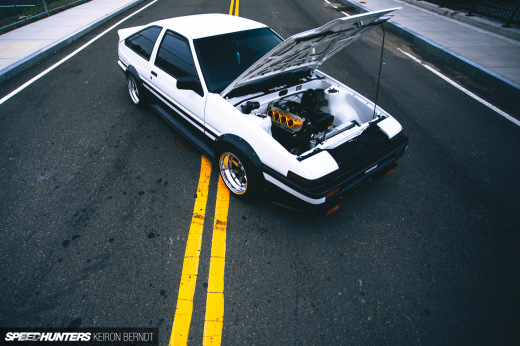 Ode To The King & Finding Respite In An AE86

I only just recently checked out the original anime and was really kind of baffled by the use of CG in the series. Never quite looked right. Hopefully everything's traditionally animated in this one.

This is probably Initial D 6 in a way. Seeing how ID3 was a movie it
make sense to conclude the series with another movie.
From the trailer it seems this will be a 3 part movie, probably some sort of re-telling of the entire series leading to the final race.

The only downer is that the race was a bit of deus ex machina for Takumi again.

I only saw the first part of the NSX vs FD in anime. It never concluded so I switched back to manga.

I really want to watch the anime versions if there are any.

meal stub The NSX vs FD was concluded in the anime. But they left the 86 vs 86 out, which should be in the final movie I suppose.

too much kanji; can't read.

the movie is just the last episode of the season - 86vs86 takumi vs a kid like him. What a rip off.

sugoi. maybe we'll see bunta delivering tofu??? its been a while since i seen this anime. its been long overdue for a new addition to the series

I really want it to be wrapped up nicely, I don't care if its gonna be Three Movies or 2 and another 12 Episodes Series... I would watch it, Initial D and Neon Genesis Evangelion are must see Anime.

I want to thank Speedhunters (especially you Mike) for bringing Initial D to my attention. I recently found an English translation, and started reading. I'm not sure how good of a translation it is, but it makes sense and I know whats going on so it can't be too bad. I'm only about 230 chapters in but I have loved every moment.

I was hoping it would be the dad in his days... initial D is like the rest of most manga's no substance in the development of the story and weak endings.

BusBuddha  Yeah, the CG in the first season was not too impressive, but what was most jarring was that the car action was half drawn, half CG and flipping between the two didn't work.

I loved initial d in the begining... But after a while it gets boring (he never loses) and story could have been so much better!

joaosamouco
Did you watch all the seasons?

The new season has wings and stuff appearing out of the cars and stuff : /. Still good but all that crap needs to go. Hopefully this one is more like the old ones

fairlady432 No, very true. And I wasn't trying to criticize the anime, merely point out that it's been the better part of 15 years since I watched //any// anime and was surprised to see CG.

j_tso It was a little jarring at first, yes. I'm maybe 11 episodes in and have grown accustomed to it. And as Fairlady said above, it doesn't ultimately take away from the overall story.

Ugh! I think I need to sit down... MMMMMHM. Initial D!

Hmm, I'd rather like a sort next-gen continuation of the series, cause all the cars become a little dated :/

joaosamouco He loses to his dad and his engine dies when racing the Evo dude. The Evo dude didn't consider it a loss for Takumi and asked for a rematch even though Takumi saw it as a loss. So, two losses... or one and a half.

Dated? in my opinion 90's anime is some of the best looking there is out there

Good Manga/Anime segway of the series would be:

- Story of Keisuke and/or Takumi becoming pro-drivers (maybe even D1 drivers)
- Story of Ryosuke becoming a doctor and discovering that a few of the doctors @ his hospital are in fact wangan racers (a-la Midnight Wangan) - then he battles some of those dudes, crashes his FC and moves on to a newer platform
- A retrospect of Bunta and Yuichi's adventures when Bunta became the best in Akina - will also give a hint of what happened to takumi's mom (think of a Shatokan Boogie style story)

I could come up with more but as I see it, Initial D still has juice to continue being a prominent manga-anime in the car/racing genere for a few generations.

LouisYio joaosamouco
Like he said, he NEVER loses, officially, or in reality. He technically didn't lose to Bunta either. he merely drove past him and showed him how outclassed the AE86 is. Although we all know his dad would wipe the floor with him.

then there was the race with God Foot and God Hand. that old guy killed him, and actually drove away from him. to the point he couldn't even see him. and then we are supposed to believe God Hand lost his nerves had to pull over and through up? get outta here! lol

Unlike Wangan, Intial D never even tried to be realistic in it's characters abilities, or the day to day realities of hard core car enthusiast.

Still a good show though.

joaosamouco  Agreed, I LOVE Intial D, but as a guy who actually street races, and eats breathes and lives cars, Wangan Midnight was much more realistic and captured the realities of running a high strung car and the consequences of the dangers and perils of the lifestyle.

dadecode joaosamouco  I totally agree with you

dadecode LouisYio joaosamouco  The Initial d anime feels rushed in my opinion, i don´t know about the manga but in the anime the story had a LOT of room to improve. But i enjoyed it anyway