While out at the Odaiba round of D1 the other weekend there was one car that was attracting probably more attention that any other drift car. It wasn’t even entered in the competition for the simple fact that it isn’t finished yet. But like you and me, this is one drift machine that the whole drifting community – at least the Japanese one – has been patiently waiting to see out in action.

It all started off years ago, back at the Blitz HQ in West Tokyo where Abe-san, the chief mechanic of the famous JDM tuning brand, had the idea to embark on an all-new project that would replace Nomuken’s extremely competitive ER34 sedan. The idea was to turn Nissan’s flagship supercar into a professional drift machine: something so opposite to what the R35 was developed and built to do. But with a need to inject much freshness into D1 they thundered ahead, dedicating all their spare time and showing their progress at events like the Tokyo Auto Salon.

The GT-R’s dual-clutch transaxle transmission was replaced with a Hollinger sequential and a custom fitted BNR34 rear end while the VR38DETT was tuned to develop a healthy amount of power with a pair of top-mounted turbos. Nomuken took the car out for an initial test drive at Nikko and while the car did drift it was not achieving the extreme angles that are expected of a pro-level car. Much still needed to be done but with lots of custom work required they ended up dropping the project shortly after. That’s when Ueta-san at BenSopra stepped in. He took the car off their hands and used it as a base to not only showcase one of the hottest aero kits of 2012, but help launch his new brand.

While the car spent most of last year being paraded at shows and events as a promotional tool, the idea to continue what Blitz started is something that Ueta-san has never abandoned. That’s why the car was entered in an exhibition run at D1 Tokyo Drift…

… a gesture to show people that eventually the idea is still to make the GT-R competitive, and at the same time test out some new parts that were custom made for it. At the beginning of the event on Saturday, I met up with Ian Baker – the man behind World Time Attack – and Jake Jones aka Drift Squid, and had a quick look around the car.

It had been a while since Mobara earlier this year when I first saw the car in its new red livery, and while the project has progressed slowly due to other cars that BenSopra are working on, some small but important changes have been made.

Most of the work has been centered around suspension geometry and some custom components to allow for more steering lock.

Since the original Blitz-built engine is now powering the 380SX they built early in the year, the R35 received a fresh stock VR38 which has been lightly tuned for more power and response. Once the car’s handling is completely sorted out, Ueta-san plans to go wild with this motor too, matching some of the most powerful D1 cars in the horsepower department.

… as it was due to go out during the lunch break, drifting in the Super Car Exhibition along with cars like a Lamborghini Murcielago, Ferrari California and a 991 Carrera. Despite the more expensive metal in the session, it was the BenSopra GT-R that really grabbed people’s attention, a crowd quickly forming around it…

… as Ueta-san jumped in and gently warmed up its engine.

… and handed to Ueno Takahiro who would be doing the driving. After having had only a couple of practice laps the night before, he seemed to get used to the car very quickly…

… not afraid to push it to the angles that it’s now capable of achieving.

The big GT-R has also been fitted with an all-new exhaust system which produces what can probably be described as the loudest and fiercest sound I’ve ever heard coming out of a VR!

Ueno-san was having tons of fun with it, after the exhibition saying that it was surprisingly easy to throw around for such a big car and that the steering was very accurate and responsive.

The engine too is apparently very smooth and always ready to deliver an almighty wallop of torque at each prod of the accelerator.

He wasn’t afraid to stay on the power either, lighting up those massive 20-inch Yokohamas with ease, as can be seen here as he is just about to lift off and flick the car in the other direction as he enters the last section of the Odaiba course.

Here he is chasing Orido in his Porsche 911 in one of the tsuiso runs they went out on.

It’s been so many years in the making, I’m sure I’m not the only one that would really like to see it completed and entered in a full D1 championship. Each step has turned it into a more focused drift car and when it gets a more powerful engine and a few more suspension tweaks it will really be ready to go.

… and judging by who Ueta was talking with at the end of the day, there might be even more interesting things happening with this GT-R in the future. Before that happens however, BenSopra is set to show yet another cool project early next year at the Tokyo Auto Salon. Topping the wild R35 conversion they came up with last year and then the 380SX this year will be difficult, but I’m sure they will manage to surprise everyone yet again. 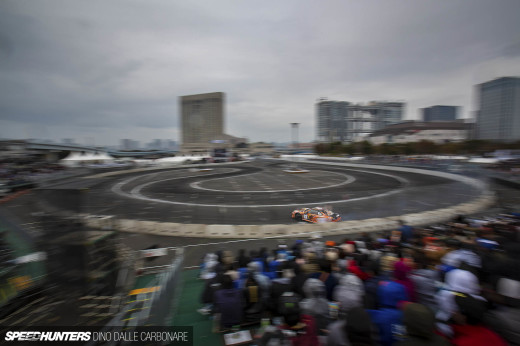 Forgive my ignorance, but who's that he's talking to in the last shot?

@Riffs Andrew Brilliant, the aerodynamicist that designed Nemo and advises countless time attack and race teams including Under Suzuki

Just saw the tag, should've picked that up. Now Nemo and Under Suzuki I'm familiar with, would be a cool collab indeed.

I like how the R35 engine can be "lightly tuned" and perform sideways. Cool

Awesome. Once again this bodykit blows me away. Big props to the Ueta-San and the guys at Bensopra. It's just dramatic, innovative and compelely outside of the box. Plus I love the idea of turning the hood, fenders, and bumpers into a one piece vertical flip hood. And now that it's on the track it's going to make for some amazing moments and some great photography.

its been resurrected with a new heart! ive been waiting to see a gt-r get sideways since the gt-r went missing from the FD series. (the gtr that was competing in FD wasn't really a gt-r at all... with a 350z engine) finally someone got it right.

are there videos of the Supercar demonstration? I'd love to see the 911 and the Lambo being thrown around the track

Awesome car really glad someone picked it up after Blitz abandoned it. Still sad Ken Nomura won't drive it since it was such a fitting upgrade from his ER34. Love the feature can't get enough of cool D1 Projects! Keep em coming!

johnbezt it has more then enough power before tuning, the drift abilities come from the suspension. Not the tune. Just think a little AE86 can perform sideways, so why invest a ton in a motor that's already more then enough.

LMAO Rays and Enkei stickers on the front bumper.

wheatgod It could "easily" be turned into one

Acc While the 991 looked good the California refused to kick its tail wide for more than half a second and then understeering, and the Lambo looked like a true handful.

d_rav Ueta-san hinted at a special hi-power VR being built for this car. With most cars in D1 boasting 800-1000 HP he will definitely need some serious horsepower

Wildcardfox  It's an imposing car that's for sure!

Did they ever end up taking the 380sx to Nardo?

i dont think they did. i think the only cars that made the trip to nardo were a group of gt-r's i believe.

Thank God they finished it. They've been leaving me hanging for months.

What ever happened to the R35 that competed in FD?

I know. It just looked a bit odd. LOL Last time I seen a three for turbos. Graddy HKS and I think Tomei.

JasonDS From what I read up on .It competed I think two times, Then they retired it. Again just read it so I could be wrong. But considering its like not around, I would not be surprised if it was scraped or something. Maybe Hankook tires thought it was bad to since they were the tire brand on the R35.

WoW amazing they should took it to Dragtimes in Russia,

Here in our side of the world, we followed a different approach. If it's hard to turn an R35 into a Drift Car, then why not turn a Drift Car into an R35? Here's the completed project car: