You can probably imagine how hard of a task it must have been for me to select five cars to Spotlight out of almost 400 rides that showed up at this year’s Slammed Society gathering in Fuji. There was one car however…

… that I saw early in the morning while it was still lining up to get into the display area, that I knew would end up making it into this post. While old school ’80s Soarers are common sightings at events of this nature, the ‘RB26 Inside’ sticker on its side window really intrigued me.

It wasn’t until later in the afternoon that I actually managed to find the car, sitting pretty on its BBS rims and with its hood proudly opened as if to say: “That’s right, have a look under here.”

… and there’s the engine! As it said on the label, this MZ11 Soarer has traded the original 5M-GEU 2.8L straight-six for some Nissan-bred power. While the exterior of the car did a great job of representing all that is right about the Japanese nostalgic car scene – cleanly maintained and dumped on a set of vintage rims – its engine conversion was a great representation of how things are done in Japan too.

To finish things off the interior featured period-correct Recaro seats, an old ’80s BBS steering wheel, and a TRD windshield-mounted cup holder for a touch of real awesomeness. This was hands-down one of the best cars at the show.

From comments on my first post, I’m very happy to see that you guys appreciated the work that has gone into creating the Weld ZN6. As Jonny from Weld told me, he wanted to approach the whole project in an old school sort of way, so this maroon beauty is a great second car to follow the MZ11 above.

‘Old school’ to Jonny means no FRP. Once the design was finalized the fenders were cut and small pipe frame welded in an arch-like pattern to set the new dimensions and girth of the widened lines. Metal was then welded on top and slowly formed the old fashioned way to create the desired effect. Highlights in the paint are there to emphasize the new lines, both front…

… and rear. You really have to see the car up-close to get the full effect and appreciate the work that’s gone into it.

As Jonny went on to explain to me, the old school approach means dampers and springs, not air suspension. I particularly like the car from this angle as you can see how the side skirts integrate into the rear fenders. Let’s hope the planned engine work will be finished soon as this is one car that’s just begging to be featured!

I had a definite double-take moment when I spotted this MK2 Jetta. It sat so unconventionally with a lower ride height at the rear…

… and then a gaping toothed-grille and exposed oil cooler at the front. The car is built by 84Base Motor Works, a shop in Niigata that is obviously not scared of trying new things.

The car has been stripped out and fitted with a bolt-in roll cage, as it’s often used on the track.

Much like the pastel military green exterior hue, the rest of the bodywork is actually pretty simple and clean…

… except for the blistered front and rear fenders. For this event it had been fitted with the recently-released Work Seeker CX rims sporting a satin black face and anodized silver rim.

Larry and I are about to start releasing a long list of feature cars we shot a few months back at N-Style in Gunma. When we showed up to the shop its owner Nagahama-san, had organized 10 or 12 cars for us, but there was one missing from the group that I really wanted to shoot after seeing it last year at the Nagoya Exciting Car Showdown. I’m talking about this VIP-styled Cima…

… which is actually more like a sporty take on the whole VIP thing. At the time the owner told me that the car was away getting some engine work…

… which was finished just in time for the Slammed Society event. As he described it, it’s now running a “full tune” RB26 swap, with detailing in…

WTF indeed – and why not! To me, this is another defining car in Japanese scene. Damn I love this place!

To finish up I thought I’d throw in a true vintage car in the mix, and this bronze four-door Hakosuka stood out as one of the cleanest at the show.

Judging by fresh paint and engine work to get the L-series looking and performing good, it had obviously just been through a pretty extensive restoration.

The car sits on adjustable coilovers…

… and is dropped on the new AME x Fatlace F/Zero2 rims.

Having a set of rear doors comes in handy when grabbing a quick nap at a show!

Don’t miss the next and final part of the coverage from Slammed Society coming up tomorrow. 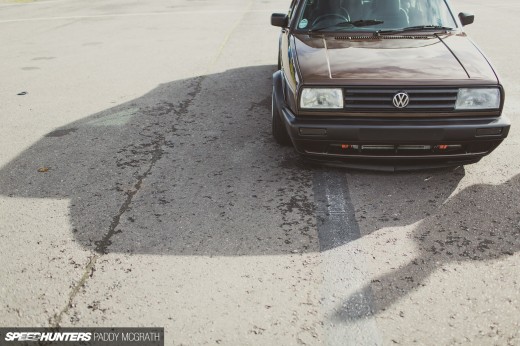 The Subtleties Of A MkII Jetta 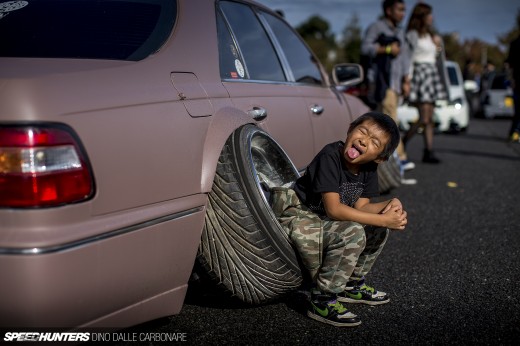 A Cima That Just Doesn’t Care 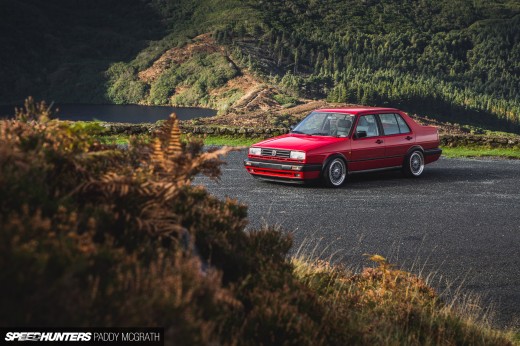 Patience Is A ViRtue: A Supercharged Jetta MkII

I really can't wait for the Weld GT86 feature. I also love how the side skirts integrate into the rear fenders. That's an awesome touch.

KRaZyAmmo Yep it's all beautifully flowing!

I'm in love with that Jetta.

I'm in love with that Jetta.

Love the cars Dino, great spots! That TRD upholder absolutely screams retro Jap! It's a shame that there aren't so many modified 'humdrum' Japanese cars, classics like the Datsun 120Y etc, I think they could look brilliant with some proper Japanese craftsmanship!

These posts from Nippon are always stunning. Love that Soarer and the Weld ZN6 isn't my style, but the work is amazing. I'm glad to see that metal work is timeless.

I love that jetta!

out of all the colors available today he picked Maroon? what a maroon.

dangina Guess you have to see it up close, really does make the car stand out

meal stub It's different, I'll give you that much lol

MartinBrandan I have a thing for the wheels it's on

speedhunters_dino dangina i can't think of a colour that would have been better to be honest. it looks amazing and sets it apart from the rest even more than it already is

speedhunters_dino dangina everybody said i was crazy when i told them i was painting my ute a metallic green and only some of them where persuaded by pictures of it. but in person every one of them has told me the colour choice was a good one

Can't wait to see that Weld 86 engine build! ..and love the rear shot of the Jetta..nice butt

That 86!!!!!! AHhhhhh!  Absolutely gorgeous.  Makes me want to have my STi done in the same manner rather than use pocket flares.

dangina light blue would have been a better colour