I love my Kaiser. It’s the embodiment of eight years of grueling work and dedication, and I can proudly say that I did it (nearly) all myself. I started building the car when I was 22 years old and attending college, working in the garage of a rented house with the cheapest tools I could find. Nearly a decade on, it’s safe to say that my tastes have matured a bit, and there’s one thing in particular that drives me nuts about the car.

When I bagged that Chevy cop car chassis I truly had a minitrucker’s mentality: run the highest air pressure through the biggest air lines to the biggest bags I could fit. In short, make the damn thing jump off the ground when I hit the switch. Since then I’ve installed smaller air lines, air flow regulators and different bags and shocks seeking a smoother ride. Another part of this minitrucker mentality was to forgo the mounting of front shocks. The common ‘wisdom’ of that scene was that if you used a thick-walled airbag you didn’t need shocks since the weight of the engine would help keep the car down.

And so, here for the entirety of the Speedhunters universe to see, is my existing front suspension. One giant airbag and zero shocks. At first I didn’t mind the slight bounce I felt over bumps, but as the years wore on it really started to bug me. Then I worked on Project Galaxie, and that car rode much nicer having all four shocks. The nail in the coffin was when I watched my car on Jay Leno’s Garage bouncing wildly over a Burbank pothole.

Enough was enough. I bought some nice shocks, bolted the rears on, then started looking at mounting the fronts. There was a problem with my plan though; it would require more grinding and welding than I wanted to do on a painted, powdercoated, chromed and otherwise finished car. On top of that, the shocks would have to be mounted outboard of the control arms, which usually causes the tire to rub. The front shocks and mounting brackets have been sitting under my workbench ever since.

Enter Air Lift Performance and their SlamAIR line of universal shocks with airbags built in. Since Air Lift is an official Speedhunters supplier we occasionally score some goodies, and lucky me, this was one of those times. As I looked at their Builder’s Reference Chart I started to daydream about a simple bolt-in solution to my nagging lack-of-shock problem. “Let’s see, if I run their stud top mounts I might be able to sneak that thing in where the airbag is mounted now and save myself the trouble of welding shock mounts onto the frame,” I thought. I couldn’t resist, and within a week a nice heavy box of parts arrived.

The first step in assembling the SlamAIR shocks was to thread in a fitting. Compression fittings are normally the last type I would choose, but I knew the frame clearance was very tight and I needed the lowest profile fitting I could find. A bit of rummaging turned up a pair of 3/8″ compression fittings that would do the trick.

One of my new-found Speedhunter skills is working on a car with one hand and taking pictures with the other. Sometimes clamps help too.

Next I threaded on the upper stud mount I had spec’ed and tightened the jam nut before bolting it to the top of the airbag.

The lower trunion mount would require a bit more work though, since the mount was wider than the hole pattern in my lower control arm (LCA). Using Solidworks, I modeled the lower shock mount on the LCA along with the trunion part as it came from Air Lift so I could figure out how much needed to be milled away.

Here you can see the before and after. Notice I left a small radius at the inside corner so as not to introduce a weak point.

The next step was to send the file to my favorite machine shop and beg them to slot the job in between their real work.

Not only did they oblige, but they cut the parts so fast I didn’t get there in time to take pictures!

I arrived just as they were taking the second part off the CNC.

With the first hurdle cleared, I installed the lower mount and started tearing into the Kaiser.

Here’s the old airbag with the cup-style mount I welded up so long ago. The idea is for the cup to sit in the coil spring seat. Kinda sad looking isn’t it?

These nasty looking tangs are what originally located the factory coil springs, then later my airbags. By holding up the SlamAIR shock and doing the calibrated squint I could tell these would need to be removed.

A pneumatic body saw with a fresh blade made quick work of it. I hit it with a right angle grinder and a little black spray paint and pushed on.

I welded these lower mounts into my LCAs and there was no way to get a tool down in there to cut them out.

A lunch time trip to the junkyard yielded another set of control arms.

Since I would be reusing my much newer ball joints, I pushed the old ones out using a little hydraulic press. Don’t do this if you plan to reinstall these ones though, pushing on the pivot point will ruin them.

I scraped away most of the old grease and dirt.

Then I donned a dust mask and face shield and made a big mess with the grinder.

Finally I could see how my freshly machined lower mounts would fit in the LCAs.

Just as I saw on the computer, all I had to do was drill a new hole a little further back.

I didn’t want to wait on powdercoating, so I used some rattle can truck bed liner. A small Scotchbrite wheel removed the paint from the balljoint and bushing surfaces.

Nuts and bolts and pickle forks

A pickle fork is one of those tools that sits in your tool box 364 days of the year, but when you need it you’re glad you have it.

With old and new control arms on the bench I swapped the bushings and balljoints.

This rental ball joint press made it an easy job. I think I might need one.

Pop! Out they come.

The tool is meant for balljoints, and it worked great for that too.

Here’s the harvested balljoint, still pretty much brand new and ready to install in the new LCA.

Using the same tool, I installed the bushings into the new control arms.

With the LCAs finally bolted in, I could set the SlamAIR shock in its new home. I trimmed the distorted end off the airline…

… and slipped on the compression nut and ferrule.

This is why I dislike this type of fitting – it has to be tightened with a wrench so you have to install the airline with the airbag halfway out.

With the compression fitting tight I could finally install the upper shock bushings and nut.

The lower mount was pretty simple, I just dropped Grade 8 bolts through the relocated holes I had drilled.

The last step was to get out my old Factory Service Manual and torque everything to spec. 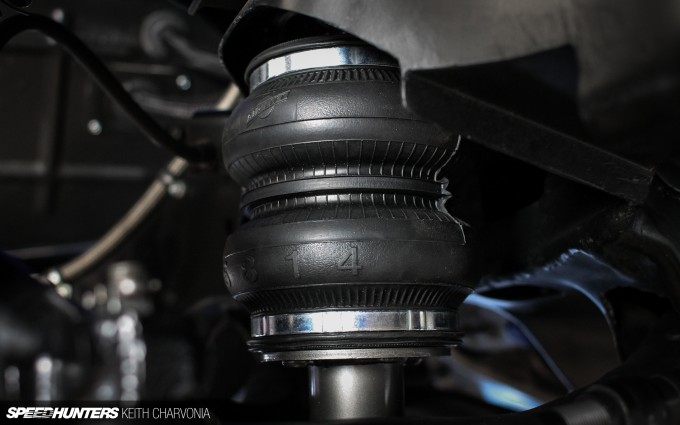 Since the Air Lift bags are smaller than the old ones I ran, there is plenty of clearance around the frame. Granted they don’t lift as high, but I didn’t really need 12″ of un-damped lift anyways.

At last, I have shocks on the front of my car, and I didn’t have to risk burning my paintjob with a stray spark from the welder either.

My car is usually seen like this since it’s a show car, but driving down the street will also be much more pleasant now. Unfortunately I just finished the installation before running out the door to Formula Drift Irwindale, and when I get home it will be an insane three weeks of SEMA preparations. I’ve only gotten to drive the car around the block so far, but I can already tell what a huge improvement the SlamAIRs have made. Just backing out of my driveway and hitting the couple of bumps on my street brought a smile to my face. What a relief to finally have this dilemma solved!

couldnt find a quick disconnect instead of the threaded ones at the same height?

Unfortunately not. Push to connect (PTC) fittings have the ability to swivel so they're taller.

Man, I love these articles you do, Keith. As a former mechanic (even if it's only pushbike) I really enjoy seeing the metalwork and other stuff that goes into these mods.

I always enjoy these articles Keith.  Thanks

What is the serialnumber on the bilstein shocks?

@Olle RCD scratches them off.

It's funny how much minitruck wisdom is wrong in hindsight. But at the same time they pioneered a lot of the air stuff so thankgoodness for that.

Art, Keith. You car is a piece of fine automotive art!

DaveT I know it man. The parts we have now is lightyears ahead of the minitruck stuff too.