All Golfs are not created equal

Over the past few months we’ve brought you numerous feature stories from the Scandinavian region, and for very good reason. Modified and motorsport builds in this small corner of the world defy so much convention that no car can really be taken at face value.

If there was ever a machine that drove that point home more, it’s Björn Forsman Roos’ Dala Performance Volkswagen Golf R32. Purists, you have been warned…

The yellow and black VW should need no introduction to Swedish readers, or Gatebil regulars. Originally built (and completed in 2011) by Peter Steinwandt of PSW Engineering and driver Daniel Björk, over the past couple of years the mutant drift Golf has decimated tyres and competition, culminating in a convincing win of 2012’s NEZ (North European Zone ) Drift Championship. Its secret? A rear-wheel drive conversion and a hard-tuned Chevy LS1 engine swap.

When PSW began building a new car for Daniel’s 2013 drift endeavors the Golf was put up for sale, quickly finding a new home at Dala Performance. Björn hadn’t just liked what he saw the first time he witnessed it turning a wheel in anger, but more so, the potential to develop it even further.

With 450hp and a relentless wall of torque ready to be unleashed with the slightest right-foot provocation, the Golf was certainly not short on grunt but as so many Gatebil builds have shown us, sensible car-building logic seems to rarely prevail in this region. As Björn so simply put it to me, “The effect without the turbo was enough, but it’s always more fun with more.”

The dry-sumped LS1 base remains in the same way it was when Peter campaigned the car last season. It’s a serious package too, featuring Wiseco forged pistons, Lunati forged rods and a forged stroker crankshaft that pushes cubic capacity out from 345ci to 383ci, or 5.7L to 6.2L for the metrically inclined.

It is however, not one, but two rather large Precision turbochargers that have really awoken the monster within. If the twins that flank the banks of the Chevy V8 don’t do it for you, I’m sure the numbers they’ve helped to generate absolutely will.

That’s because when maximum boost is dialed up through the Precision 46mm wastegates, a mind-numbing 1056hp and 1400Nm is achieved.

Four digit figures are one thing, but when you consider the Golf’s compact dimensions and 1100kg weight, it becomes very clear just how crazy this little car is. But you’d expect that with a power-to-weight ratio of almost 1:1.

To capitalise on the forced induction generated by the turbos, a high-flow Edelbrock Pro-Flo XT EFI intake manifold featuring a large plenum chamber and tapered runners sits squarely above the engine alongside MSD coils and twin Edelbrock fuel rails. 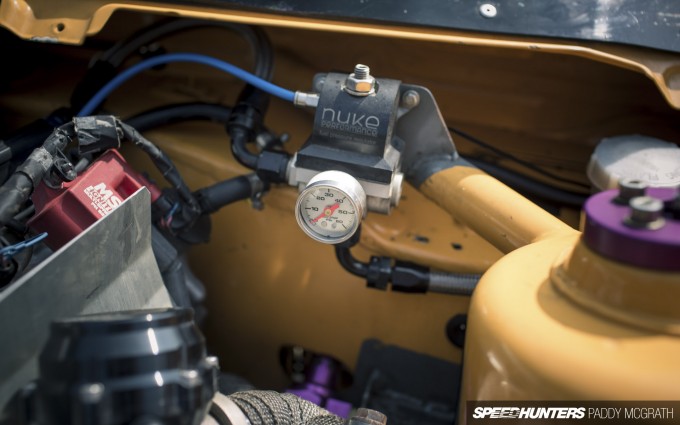 The latter is one part of a sizeable fuel system that feeds the engine via large braided stainless fuel lines, a Nuke Performance adjustable regulator and eight Delphi 893cc injectors.

The set-up continues into a custom cavity in the rear of the car, which along with a custom alloy fuel cell, features a Barry Grant 400-series fuel pump that supplies three DeatschWerks DW301 pumps fitted inside the catch can. According to Björn there’s still plenty of untapped potential in the twin turbo LS1. If, or perhaps when, he eventually decides to find out how much, a few upgrades around the fuel system will be required before the car can go back on the Dala Performance dyno.

Although the driveline was built tough the first time around using quality gear like a Jerico WC4 four-speed dog box, it didn’t take long for weaknesses to begin showing when faced with more than double the original output of the tuned Chevy motor.

According to Bjorn, the Volvo rear end that was previously fitted “did not handle the effect”. Read into that what you will. In its place, and thus far proving reliable under all the stresses, is a Chevy 10-bolt unit courtesy of a Camaro Cup race car.

Except for some minor alterations that needed to be made when the new rear end was amalgamated into the custom four-link arrangement, the suspension tune remains largely the way it was when PSW built the car. Quite simply, there was no reason for Björn to start messing with it given the Golf’s previous winning ways.

Designed around a rallycross-style set-up, Sachs dampers are used in the custom-built front coilovers with Öhlins gear in the rear. Björn, of course, was more than happy to demonstrate the Golf’s counter-steer capabilities for us.

As you’d expect for a transverse-V6 to longitudinal-V8 and four-wheel drive to rear-wheel drive conversion, there’s a lot of engineering in this car that you just don’t see. Björn tells me that the wheelbase still remains the same as it did when the Golf rolled off VW’s production line, but the same definitely can’t be said for the track which necessitated the fitting of wide Volkswagen Motorsport fenders front and rear.

The office is a clean and functional space. Because of the major changes made to the floorpan and firewall, the seats and controls are set deeper into the cabin. There’s nothing wrong with that low-slung seat driving position either.

Featuring Sparco Sprint V race buckets and Sandtler harnesses it’s a quality fit-out too. From this angle, you’ll see some of the work that PSW put into the chassis; specifically the new floor section and rear wheel tubs.

That pedal on the right is all that stands between Björn and more than 1050hp. Caution should be exercised, but I’m not sure that memo ever got through.

A speedometer is not required, but a 10,000rpm Sport-Comp tachometer and Shift-Lite absolutely is. I’m sure the other gauges from Auto Meter and the STRI 3.0kg/cm boost meter come in handy too during those rare moments the Golf isn’t being driven from the side windows.

Even though Björn has only had his hands on the car for a short period, that’s all the time he has needed to turn one of Europe’s craziest drift builds into something certifiably insane.

However, he’s quick to point out that it wouldn’t be half the car it is today if Peter Steinwandt and Daniel Björk hadn’t engineered it to such a high standard in the first place. Apparently it’s very easy to drive, but I’m going to have to take Björn’s word on that one.

During the long cold winter months ahead, Björn will be keeping himself busy improving oil cooling to keep engine temperatures in check, and negotiating sponsorship packages for the 2014 season. Where the Golf goes from there is anyone’s guess, but given what there is to work with, we’re looking forward to finding out.

Ace, but the column mount is a little......agricultural :/

Really cool article, wasn't sure what to expect when I opened it.
I must say as a english critic, decimate may be the wrong word choice. I'm sure you can find rants on it around. But removing 1/10th of all is not that great of a complement to what looks to be a top notch competitior.
I love the Steering column "oops" as well. It really is always a question of what to do when you have to move a fixed point on an angled plane. Function over form :).

Decimate means to reduce to 1/10th. Not remove 1/10th. It's also a synonym for destroy and annihilate. Maybe study on on words before trying to learn other people about them, yeah?

seattlejester to decimate all is a fast and furious quote...

Taked to the guy who owns this car on gatebil once,really a cool guy ! Had plenty of time to chat with me and a friend that passed by his stand,not sure if he had converted to twin turbo back then,anyways Frendly guy ! Full respect to him and his absolutely mad Golf !

seattlejester are you really "a english" critic. tisk tisk I guess not a grammar critic. lol jk

Not bad, but these "ZOMFG POWARRR! Gatebil build are starting to get a bit boring frankly. I'd probably never say that if I had been there and I do appreciate everyone's work (both the builders' and yours), it's just that as a reader it gets dreary coming across the same Scandinavian insanity buzzwords again and again and again. I suppose you have gotten most features for this year out of the gate by now, so I'd like to suggest a different approach to the next Gatebil. Fewer features, but more Spotlight-O-Ramas, I love those!

PSW engineering seems to turn to PWM a few times, love the car tho!

@Philipp Ulrich Get on a plane, join the Gatebil July event.

@Philipp Ulrich I get what your saying, and it's something we are quite conscious about. But it does say a lot about how wild they are building cars there when 1,000HP RWD V8 Golfs become 'dreary'. Can you imagine a car like this built in the late nineties? The world would have melted!

ChristianHopland Yup, he's a super nice guy and his friends that helped us with this shoot (by stopping literally hundreds of people from walking through each shot) were also top blokes.

johnbezt seattlejester Hah, good catch, typing on my phone leads to simple errors on many an occasion!

@Brent seattlejester It is a small niggle, but alas, still one which is misused. Someone has to defend a word's definition, or else we get changes to the definition of words like literally, which according to google, now means something which is not literally true...you understand how sad that is that people misuse a word so much that the word a subsection of the definition now also means its antonym.

atomskk seattlejester My fast and furious quote database fails me, if that is so, carry on :D.

Wild stuff and wish we would see more of these with even just a basic v8rwd setup from average Joe's.  Cool feature, once again speedhunters is on point.

Does a rear wing really help when drifting?

I'm in shock by the comments that the 1K HP Scandinavia builds are getting boring... There is no manual on how to put something like this together, but people are making Bugatti numbers out of Garage / small shop builds! This is mind melting!!!
In Canada we have the cold long winters, but we don't all come out of hibernation with a new volvo / volkswagen / BMW / Supra with a Mercedes backend, and a Corvette crate engines... and custom metal work throughout it all!
I thought HPA Motorsport took the R32 to the limit with their SEMA car a few years back, but leave it to Northern Europe to prove me wrong.

this made my day. i always loved this chassis. seeing gone gatebil is totally bonkers. the only thing that could top this is a v8 powered fiesta now lol

This got my imagination rollin now. Never would think of popping an LS1 into one of these chassis, hats off to the owner/builder.

I enjoyed lesson this notify therefore it http://www.shehulegal.com so ample fascinating packs also info. Forthwith, I shall partake this accompanying my sidekicks. Hope they endow same this.

@tanksnr It´s for the smoke to get up in followers face..