If you’re going to celebrate 100 years of a marque, you really want to have 100 cars present. The Aston Martin Centenary Meeting at Brands Hatch managed that and more – in fact, it seemed that they had to limit the number of cars that took part in the on-track parade, and you could then add another 60 or 70 racing Astons that were competing in the many races over the weekend. If you loved Aston Martins, Brands Hatch was definitely the place to be.

There are precious few events like this, where you get to see virtually every model a marque has produced.

A privilege? I reckon so. Made even more special by the passion of the owners, brought together by the Aston Martin Owner’s Club.

We’ll be delving deeper into Aston Martin’s 100 year heritage next month, so the Brands Hatch festival was a perfect way to see its history in the direct context of the cars it’s produced, with four distinct eras on show. The most famous is of course the period of David Brown ownership, covering a quarter of the company’s existence.

The DB series introduced a line of classic road and racing cars, and both the names and styling from that era carry through to today.

The nuanced changes that defined the DB4, DB5 and DB6 are echoed in the subtle revisions across the modern Aston Martin range, reinforcing that when Aston Martin has ‘a look’, you know you’ll never mistake it for anything else.

Much as automotive museums can be amazing places which are often the only possible chance you would get to see many disparate cars in one place, this kind of in-the-raw gathering is on another level. It’s the sort of event where the many families who attended with children will now have to cope with the fact their kids will now be confirmed petrolheads for life. Happy fathers, but maybe a lot of resigned mothers…

Brands Hatch was also the chance for me to get a glimpse in the flesh – for the first time ever in some cases – of some of the offshoots of David Brown’s motoring business purchases, specifically Lagonda…

… and also see the badged evidence of other important purchases, such as the Tickford Coachworks.

And then how about its most well-known Italian collaborators, stretching back over half the company’s lifetime? Superleggera bodywork courtesy of Milan’s Carrozzeria Touring…

… and its neighbours Zagato for styling – the latter a company which has maintained a close relationship with Aston Martin to this day.

I also spotted some of the options from the Aston Martin ‘Q Service’ that I’m pretty sure the over-the-counter list doesn’t include.

As if the owner’s club cars weren’t enough, the other side to the celebrations was a full range of on-track demonstrations organised by Aston Martin Racing, showing off its strong competition heritage.

It’s not a story of continuous, easy victories: Aston Martin has had tough times at the races over the years and has always had to work for success, but its commitment to motorsport has never been in doubt and its highs have been vertiginous.

A star attraction for the Sunday was the appearance of Bruno Senna, who’s driving for the team in the World Endurance Championship this year. The 29-year old drew a long line of fans for the morning autograph session.

Bruno seemed to be honestly enjoying himself, at ease with all the attention and with a constant smile on his face. Escaping the claustrophobic politics of F1 can have that effect… I’m sure Mark Webber will find a similar freedom when he joins the sportscar ranks next year.

Bruno took out his regular ride, the GTE Vantage V8, for a string of demo laps, giving all of us around the track a reminder of just how quick the thundering GT car is.

A number of other Aston racers were out at the same time – there seemed to be a little mini-battle for outright pace going on between Senna’s Vantage and the beautiful 1989 AMR1 Group C car, with the V8s from both singing away in perfect bass harmony.

Also taking part was the Aston Martin Nimrod Evo Group C car from 1983/84, developed by RML, which could hit 343kph at Le Mans.

Also out were a prototype DB7 racer and pre-war Ulster, but the jewel was undoubtedly a genuine, multi-million pound DB4 GT Zagato Le Mans car, which was understandably taken around at a rather more gentle pace than the more modern machinery.

Although the James Bond link was admittedly a major part of building Aston Martin’s reputation in the ’60s, the film tie-in wasn’t overplayed, with a respectable quartet of representative cars on show…

… although the Bond score playing over the PA as the Red Devils parachute team came in was more than appropriate. I wasn’t alone in standing there with my mouth open as the three jumpers came down locked together, performing loops as they descended. How is that even possible?!

Saturday had seen a parade of Aston Martins sweep round the Indy track at Brands, though I wasn’t the only one disappointed that the cars only did a single lap before being ushered off.

The good thing was that the massed ranks then returned to their parking area overlooking the circuit, where they could be admired at leisure – and there really was a lot to take in. Taking in the parade and parking presented a trip across Aston’s 100 years.

The majority of Aston Martins have been constructed in the most recent decades, so seeing the older cars – particularly ones from the ’20s and ’30s – is no small thing when production numbers barely hit the hundreds. The parade was led off with a strong continent of these early machines: probably around half a dozen, though around 20 interwar Aston Martin racers were competing later that afternoon.

The parade was vaguely in historical order, though things got more mixed up as the waves of cars continued to flood out. The classic grill shape first took shape with the DB2, gradually softening and losing height as the years went by and it evolved into the DB2/4 and the DB Mark III that followed.

Original colours can look a little staid, but this metallic 2/4 looked spectacular glimmering in the sun.

But it’s the DB4 where every line becomes sharper, the poise tauter and the classic shape emerges that would last for three further iterations.

Though there were variations on the theme, courtesy of Zagato – specifically the DB4 GT, where 19 cars were converted to lightweight coupés in the early ’60s, followed by a further six ‘Sanction’ models in the ’80s and late ’90s. Even in comparison to modern cars these were quick, with six second 0-60mph capability.

Third-party replicas based on DB4 chassis are popular, and only marginally less expensive. Much as I wouldn’t want to assume this is a replica, I’m not sure I would leave it unattended if it was an original! Then again, I wouldn’t leave it on its own even if it was a replica…

As with the DB4, around 1000 of the evolution DB5 were constructed: the DB5 barely changed a winning formula, but deployed a larger engine with triple SU carbs and a ZF transmission.

Back to the parade, there was a virtual flood of DB6s! The updated DB6 moved the firm towards more mainstream territory, and sales doubled. The wheelbase was lengthened slightly to improve stability, and there were more subtle styling tweaks at the front, particularly with the split bumpers. At Brands I was trying to play ‘identify the DB with one look’, but mostly failing unless it was from the rear…

The Kammback styling treatment at the rear of the DB6 is the giveaway: it’s not universally loved by purists, but as has already been mentioned in the comments of my previous AMOC story from Brands it did give the tail a more cohesive look.

The DBS bridged the ’60s to the ’70s: it couldn’t be much more different to the preceding generations, and it’s an easy one to forget (for me at least). Not in a bad way, but just that the DB4-6 series has such impact, and that the V8s that followed were such thugs!

The DBS began the muscling-up process that led to the V8 though, so in mind of this car the V8 maybe isn’t such a surprise. It really does reflect the style of design that was emerging in the ’70s: more squared off, with higher shoulders – though the Aston grille shape is still just about there.

Then you move to the V8 era. I’m used to seeing these cars in race series like Intermarque, where they are certainly sporting body kits, but the standard car hardly looks subtle! With big V8s under the bonnet and muscle car styling that was an ocean away from what was typical for Europe, I can only imagine what the Aston aficionados of the ’70s thought. There must have been a lot of tea being spat out…

Like the late ’60s DBS, if asked before the weekend I’d probably have completely omitted the Virage series if asked to quote the history of Aston Martin. To give me an excuse, this was produced during one of Aston’s more ‘difficult’ periods, and barely 1,000 were built of its three variants (coupé, convertible and V8) across its decade. It evolved the muscle car styling further, bringing it more into line with ’90s sensibilities. A future classic perhaps?

One car that I really hoped I’d see was the four-door Lagonda, so I was bowled over whenI came across five on site: I think this was the wedge-shaped epitome of ’80s ultra-modern luxury. Less than 700 were built, and it helped shore up AM’s ailing finances at the time – temporarily at least.

The interior is as extreme as the exterior, with a plush leather cabin that’s a cross between a racing car and spaceship. I absolutely love it. I don’t want to say too much on this as we’re planning a feature on this car for our Aston Martin theme next month.

The DB7 of the ’90s was produced under Ford ownership with Jaguar know-how, and brought the company both stability and a successful run of sales: 6,892 were built and sold. I have a terrible habit of looking up second-hand prices after going to events like this, and you can now get a DB7 for a surprisingly good price!

Aston Martin today is in rude health: its road cars are back to their extreme, howling or growling best (depending on the V12 or V8 within), and its efforts to break into new markets haven’t compromised its heritage: I don’t think you can say a Rapide isn’t a true Aston Martin, for instance.

Being 100 years old doesn’t seem to have an effect on the company – if anything it’s getting even more spritely in its old age! 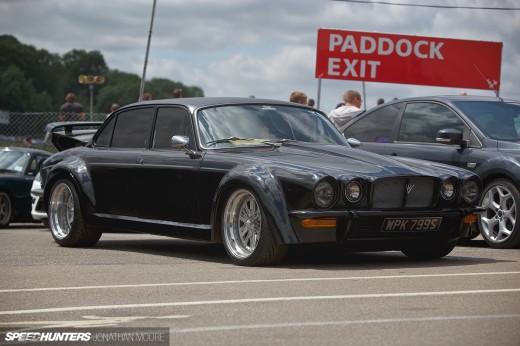 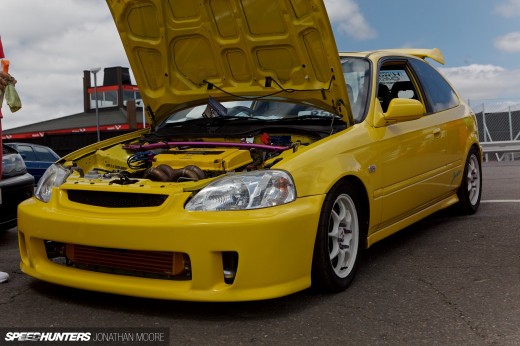 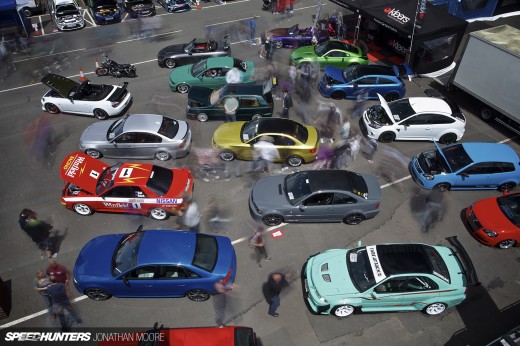