The 2013 Autodrome Heritage Festival at the Linas-Montlhéry banked oval, located just south of the French capital city of Paris, provided rich pickings of classic cars and showed off the incredible range of shapes and approaches to car design used between the ’60s and ’80s. There were plenty of cars that are either relatively unknown outside France or just generally rare, with example after example of forward-thinking, interesting or plain quirky designs – many of which would provide incredible platforms for modern projects.

Let’s kick off with the unmistakable wedge-shape of the under-rated Alpine A310, a car which spearheaded the Renault subsidiary’s move into the modern era. The A310 represented a big shift in design from its predecessor, the diminutive A110 , with its aggressive angles coming straight out of the ’70s supercar manual.

This is an example of a later V6-powered car from the early ’80s, sporting the aggressive wide body pack that aped the Alpines competing in Group 4 sportscar races of the time. With the deep wheels filling the flared arches, these A310s rock some seriously Space Age cool. How about a Liberty Walk A310?

The initial four-cylinder models were identifiable by having six headlights; the later V6 versions had large quad lamps and more angular bodywork. It’s strange to think that the A110 was still being built at the Alpine factory in Dieppe for several years after the A310 was introduced: what a contrast! Although the A310 is that much bigger than the A110, it’s still a very compact car when you put it next to a lot of its contemporaries.

The A310 has mechanical links to the DeLorean DMC12, as the latter company used a fleet of the V6 machines at the end of the ’70s to develop their own platform – the same PRV V6 was used in the DeLorean (though fuel injected) and mounted in the same position: rear longitudinally.

The A310 sat on a tubular steel backbone chassis, and lightweight fibreglass bodywork was used to keep the weight under 1,000kg. They weren’t exactly overpowered out of the factory, but followed the typical European approach of keeping the weight low and concentrating on handling. Aero efficiency was matched to double-wishbones all round, and the ride is described as neutral but grippy. But I admit, it’s the looks that win it for me…

Along with Alpine, Matras also featured heavily at Montlhéry, as the Bagheera was celebrating its 40th birthday. The Bagheera was a contemporary of the A310, and although it was a more refined shape I have a soft spot for the clean, classic lines it sports. It has several angles that could have come straight from Lamborghini or Ferrari.

This is an S model from ’77, where the bumpers were much more subtle. Later models used larger wraparound plastic bumpers which made the car look more modern (in an ’80s way), but perhaps detracted a bit from the purity of the original design. As befitted a technology-led company like Matra, the Bagheera was cutting edge. Its inline four-cylinder was mid-mounted…

… the seating was innovative and practical, providing a trio of sports seats in line abreast…

… and the cockpit was like something out of an X-Wing. Things could have got even more interesting for the Bagheera, as Matra developed a U-shaped eight-cylinder engine for the car in 1974, to be made from two 1.3-litre fours sharing a single crankcase. But ultimately the bores at the Chrysler parent company vetoed the project.

Almost 50,000 Bagheeras were built between ’73 and ’80, when the Murena was introduced. But as with so many European cars of the time, build quality was the killer and the Bagheera’s steel subframe tended to rust so quickly you could almost watch it happening, so only a relatively small percentage have survived. Luckily they zinc-dipped the Murena.

What I find so exciting about cars of the ’70s and ’80s is the willingness of car manufacturers to try pretty much anything. It didn’t always work, and half the time the methods (or lack thereof) used to construct cars meant they fell apart in seconds, but some gloriously quirky stuff came out of the period.

Take the fastback SM from Citroën – one of the firms that could be considered as one of the most out-there of all the mainstream companies. Citroëns generally looked like nothing else anyway, but the fact that the SM took the sci-fi hovercraft looks of the DS and made a low-line, front-wheel drive GT coupé that aimed to take on Jaguars and Porsches of the world, well… were they crazy?! Quite possibly yes, but the SM wasn’t actually messing about.

Its compact 90-degree V6 was designed by Maserati (which Citroën owned for a time) and shared the same architecture as the aforementioned PRV unit. The active hydropneumatic suspension is the obvious starting point for a Citroën…

… but the SM was awash with technologically advanced gadgetry: variable power assist, self-levelling lights (the inner two swivelled), rain-sensitive wipers, hydraulically-controlled disc brakes, optional composite wheels and so on. Like the DS, it had unexpectedly sharp and sensitive handling, and really could give the competition a run for their money on the road and even on the rally stage.

The SM sold in ludicrously low numbers for what was supposed to be a mass-market car producer. Less than 12,000 were built between 1970 and ’75, with numbers down to the hundreds for the last years of production. As with so many contemporaries, Citroën bounced around between different owners but seemed to be gleefully resistant to the demands of the market; it was only forced to stop making the SM when bought by Peugeot in 1974, which killed off the project the following year.

Stepping back a decade or so, I was also very happy to see this Lotus Europa (in fact, one of two at Montlhéry). I’ve always been fascinated by the Europa: it has such a unique shape, with its long side profile and high-backed, almost van-like rear bodywork.

Like so many Lotus, it looked like a racing car and certainly performed like one: its suspension was derived from the technology the team were using in Formula 1 and the fibreglass-bodied Europa was a featherweight 700kg.

That raised rear deck edge gives a false perspective of the Europa’s height. Although it extended the line line of the cockpit roof backwards, it’s still barely up to waist height.

A mid-mounted Renault-sourced inline four was used in the first series of Europas, before the team swapped back to more traditional Ford twin-cam power in ’71. The shock is the cockpit having decidedly non-Lotus-like luxuries such as electric windows, leather detailing and wood veneer on the dash!

This Europa had definitely lived an active life, but that just made it even more attractive really: a driver’s car needs to be driven, after all.

Now, if you saw this angle and those wheels, the first reaction would likely be to say ‘Mini’…

… which would only be half right. Marcos was well known for its long-nose GTs, but decided to develop a low-cost GRP kit in 1965 to make the Mini even more potent.

Taking a car that was already a useful competition weapon and well able to humble bigger and more expensive racers, the Mini Marcos just made those other drivers even more upset. One car managed 141mph at Le Mans in 1967!

This Mini Marcos was a fully stripped-down racing car version: the mechanicals and subframes from almost any Mini could be bolted to its fibreglass monocoque and most engines could be squashed in under the hood.

Perhaps the first thing I think of when I look at a car nowadays is whether a car would be fun to drive – no matter its size or looks. A Mini Marcos would tick that box, I reckon.

I’ll finish with another car that looked like one thing from the front but turned out to be a whole lot more interesting. I love 2000 series BMWs anyway, but it was when I walked around the side that the surprise arrived: the roofline seemed that little bit longer…

This was a 2002 Touring, a three-door coupé version of the Neue Klasse designed by Italian styling house Michelotti and built between ’71 and ’73. More a hatchback than the Touring name would suggest, but still.

This was a Chamonix White ’73 model, sporting the two-litre engine: not as rare as the Tii or Turbo, but still a very nice car to catch – especially in this beautiful, original condition.

…who actually had it up for sale at Monthlhéry. I wonder if this car is already in the hands of a lucky new owner?…

The Autodrome Heritage Festival at Montlhéry 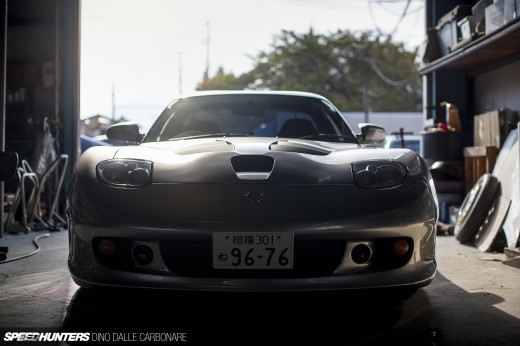 The Rotary Dream Is Well & Truly Alive At Scoot 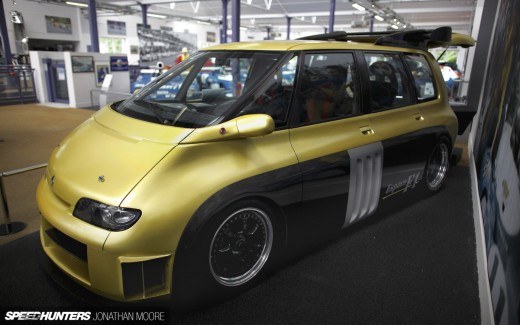 Matra On The Edge: Street Extremes 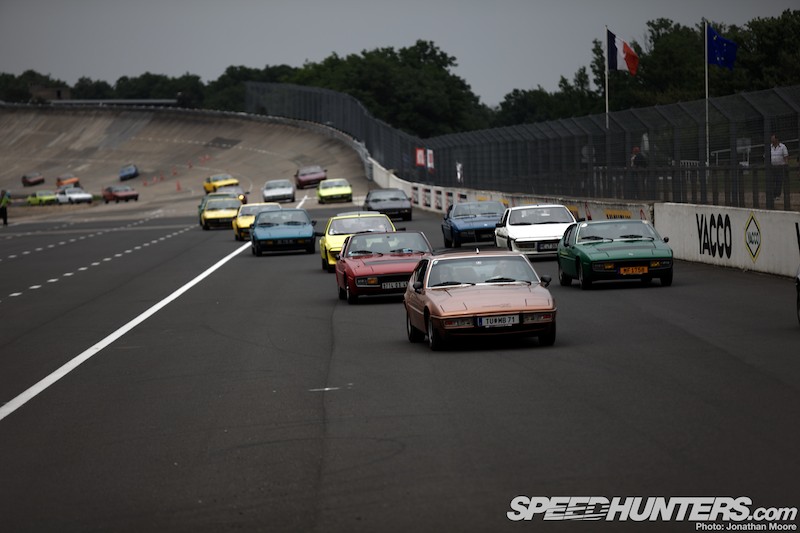