As Australia’s premier championship race series, V8 Supercars has a huge following down under, and if you’ve experienced it in the flesh I’m sure you’ll know why. The category might be far removed from the production-based racing and the exclusive GM Holden versus Ford rivalry it was forged upon, but to me it’s no less exciting when the grid lights go out.

From the outside looking in, V8 Supercar teams appear to run world-class operations, so when the opportunity arose to spend some time with the team behind the newly-formed Red Bull Racing Australia – V8 Supercar stalwarts Triple Eight Race Engineering – I wasn’t going to pass up the chance to find out for myself. This year marks the tenth season Triple Eight has been involved in the V8 Supercars championship. The British-born company, which built its reputation on 12 British Touring Car Championship wins. still operates in the UK, but the Australian subsidiary headed by Roland Dane (standing in foreground), is now a completely separate entity. 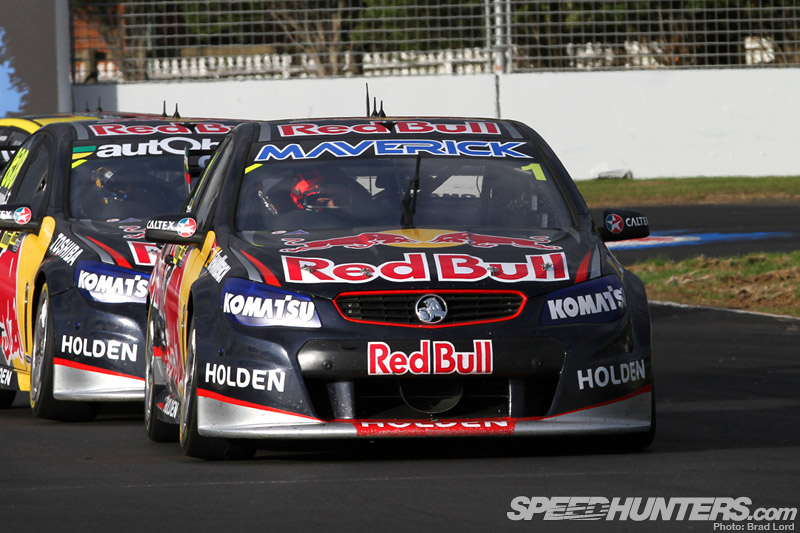 It is, however, one of the most successful V8 Supercars teams of recent times having won four driver’s championships with driver Jamie Whincup during the last five years, including 2012. Of course, during that time the outfit was running a very different race car, and a different naming rights sponsor in Vodafone.

That might have all changed now, but what hasn’t is the way the team operates. It didn’t take me long to figure out that this is a very well-oiled machine, thanks in part to some seriously talented engineers. That includes the hands-on Team Principal Adrian Burgess, who looks after the day-to-day racing operation both at Red Bull Racing Australia HQ in Brisbane and at pit garage level.

Burgess is an extremely experienced engineer who formerly held the same role at Dick Johnson Racing before shifting over to Triple Eight in 2011. Given the way he goes about his business around the pit garage, it didn’t really surprise me to learn that during the ’90s he spent eight years working at McLaren F1 alongside Ayrton Senna and later Mika Häkkinen who he won the world championship with in 1998. You simply can’t buy that sort of experience.

It goes without saying then that Red Bull Racing Australia is one of the most professional teams in the V8 Supercar series. That was very evident when the drivers brought their cars back into the pits during Friday’s practice.

As the digital clock in the corner of Whincup’s garage counted down the remaining time left in the session, his team of engineers prepared themselves in a semi-relaxed, but still systematic fashion. I don’t think I need to assume that this scenario has played out many times before.

Practice it may have been, but with the timer counting down the minutes for valuable track time, things happened very efficiently. As tight as the confines in the pit were (the wide angle doesn’t really tell the full story), I was the only one getting in the way. Sorry guys.

Tools are neatly arranged and laid out too, leaving little chance of not being able to find something in a hurry. I never got to see ‘Big John’ or ‘Little Bob’ being swung around – and I’m sure Red Bull Racing Australia is happy about that fact – but they certainly looked like they’d get the job done if the need arose.

Before I could even really comprehend what had gone on, the cars were back on the ground and headed towards the pit lane exit for some more track time…

… and the data capture and analysis began once more.

Throughout the day, both Whincup and his teammate, Craig Lowndes, gave feedback to their engineers and alterations to the set-up were performed. Apart from the actual suspension layout, which is controlled by V8 Supercars Car of the Future regulations, it’s here where precious tenths of seconds lie, and where adjustments were often made in an effort to find the optimum setting for the fast, but relatively short Pukekohe track.

Although the Triple Eight team has 10 years’ worth of V8 Supercar experience behind them, it’s only the fourth championship outing (in just two months) for the new control chassis machines, meaning that there’s still much to learn about the new cars. Every second in the seat counts.

Every team in the 2013 V8 Supercars championship is in the same boat, of course, so finding the winning formula as quickly as possibly is the primary goal.

After the Auckland round (number four of 15) Red Bull Racing Australia maintained first place in the teams’ championship, with Whincup and Lowndes sitting second and third respectively in the drivers’ standings.

As good as those early placings may be, the margins are extremely tight, so any advantage gained – however insignificant they might appear to be in the grander scheme of things – is an important one.

With only 28 control tyres available to last each car for an entire weekend’s racing, keeping on top of the inventory and ensuring that every last drop of use is extracted from each Dunlop rubber band is a job in itself.

As much as I enjoyed myself trackside I decided to sit out the last 35 lap, 100 kilometre (62 mile) race of the event so I could watch it unfold from within the pit.

At the heart of the operation, two banks of computers were in use: one for engineers keeping an eye on the physical parameters of the two cars out on the track, and the other for the Team Principal and the driver’s engineers who watched over the actual racing itself, and communicated to the cars anything that needed to be said.

As you’d expect there’s an immense amount of data available from the vehicles’ onboard electronics and race control, including the sector-by-sector performance of the entire V8 Supercar field, as well as information specific to each of the team’s cars, such as real-time speed, applied brake pressures and engine fluid levels. There are a lot of numbers to process at the same time, which I guess only adds to the pressure of the situation.

Another important screen was the real-time weather feed, allowing teams to stay ahead of the game in case of changes in conditions, like rapidly approaching rain clouds.

A wet track never eventuated in Auckland, so there were no surprises for the drivers. Not that the rain seems to reduce the ten-tenths commitment from behind the wheel.

After starting from second on the grid and taking control of the race early on, Whincup finished in third for his second podium of the weekend (in the second race he placed first). Lowndes started and finished in ninth after placing third in the first race and fourth in the third. That’s not a bad result by any stretch of the imagination, but I could sense that the entire team wanted more. It’s that thirst for success that I’m sure will ultimately pay dividends for Red Bull Racing Australia.

Having never spent more than a fleeting moment inside a V8 Supercar pit garage before, spending time with the team from the inside looking out was a neat experience. I can only hope that I’m welcomed back another time!

The Gibson Group A Skyline GT-R on Speedhunters

Brothers From Another Mother: A Fairlady Z & HSV GTS